The Rise of Tiamat - The Sea of Moving Ice 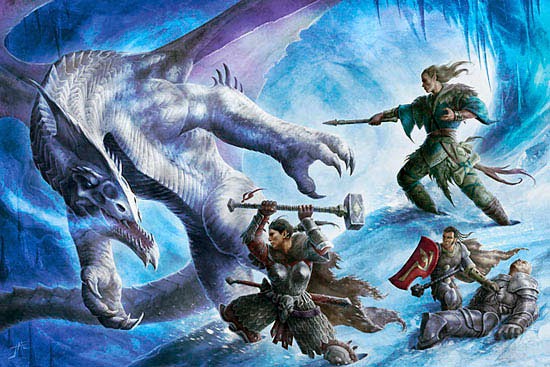 It is still extremely cold out in New York, and once again that meant that the game store was quite crowded and extremely loud.

It is astonishing how successful this edition is. Three new people came in to play tonight. They were able to squeeze in at the owner's table.

I Am Running Another Table 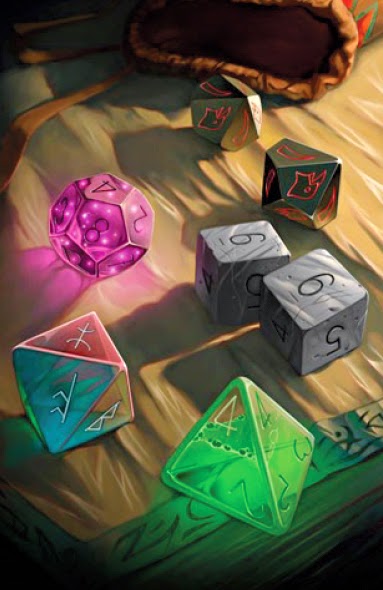 I am officially starting a second session of Hoard of the Dragon Queen on Thursdays. The group will be comprised of an amusing mix of some of my D&D Next players (starring Hack and Slash Guy), some 20-something newbies and a couple of teenaged females.

It feels sort of redundant to write session reports of these, but I might do it anyway if it seems fun. I get to implement the things I have learned from running it the first time around. Maybe I'll go ahead and run that duel in episode one this time. I can better foreshadow Frulam and Rezmir. I can put a ballista on the wall during the blue dragon encounter.

I'll also hopefully get to see some different PC classes in action. As you may be aware, my group has 3 rogues, a sorcerer, a paladin and a fighter. I'd like to see more casters in actual play.

I was wrong about something last week. Dark's dad is a member of the zhentarim. My group has three Zhent rogues.

As we got underway, I went over some stuff:
Assassination Time

With all of that out of the way, we got into the first assassination encounter. I detailed my plans for it in my guide. Basically, the heroes party in the tent community at Boareskyr Bridge. A few cultists place some explosive barrels in there, and then a red dragon ridden by the red wizard Azbara Jos swoops down out of the sky and breathes fire, igniting the barrels and causing a massive explosion.

To foreshadow this, I had the heroes spot the red dragon in the sky during the trip from the tomb to Boareskyr. I also had the heroes find the scorched corpse of Jamna Gleamsilver, the NPC from Hoard episode 4. They correctly deduced that she'd stolen the white dragon mask and had been killed by a dragon. The cult had taken the mask back.

I was hoping they'd take her body back to Waterdeep to get raised, but they didn't do it.

In Bolo's Tentside Inn at Boareskyr, the paladin was recognized as the slayer of Rezmir. The poor citizens told their stories of losing their homes due to the cult attacks. Dark and the gnome felt sorry for them, and gave them each piles of gold. 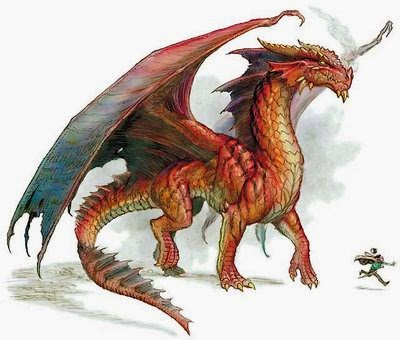 The heroes gambled, they drank, and they had a good time. Thankfully, Dark's dad declared he was sitting back and keeping an eye on everything. Thus, he noticed the trap being set. The barrels were delivered and the dragon was swooping down from the sky!

The NPCs fled the tent. The heroes ran outside. To my horror, the gnome decided to climb onto the roof of Bolo's! Azbara Jos fired off a fireball spell, blowing up Bolo's and injuring a few PCs greatly. Dark was down, and other heroes covered Sparky and took his damage. The poor gnome rogue was all messed up, lying in the burning wreckage. 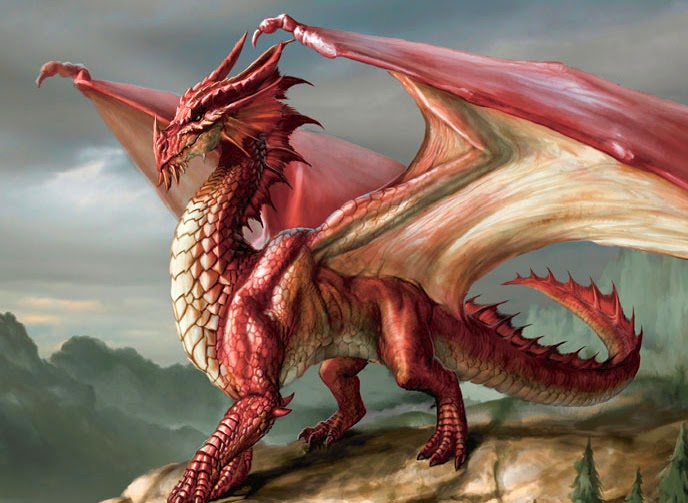 Someone revived Dark, and she angrily cast a cloudkill spell up at Azbara and the dragon, which did 25 points to the red wizard (he has 39 total). I was ready to cast counterspell, but the range on it is 60 feet and he and the dragon was 90 feet up!

The dragon swooped down and breathed fire, doing 56 points and gravely injuring some of the party. The heroes took aim with missile attacks and targeted Azbara... rolling two criticals! The gnome and the fighter took down Azbara.

The dragon took one last bite at a PC, and flew off with Azbara's corpse in hand. The dragon swore that this was just the beginning.

Interestingly, the book suggests leveling the PCs after each assassination encounter. I am not doing that. The encounter took, at most, an hour.

In retrospect, I gave the heroes too much lead time. I have been treating them with kid gloves (partly because some of them are kids) and I think they can handle more of a challenge. I will make the dragon's second assassination attempt more devious. I'll also have to look into whether the cult would raise dead on Azbara or just replace him with some cultists.

Heading Back to Waterdeep 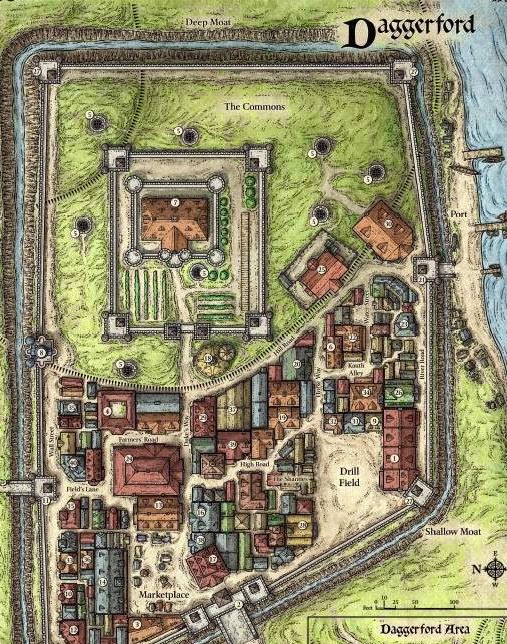 Our heroes almost decided to try and trace the dragon back to the Well of Dragons but instead they decided to head back to Waterdeep. They followed the road north and came to Daggerford. Sir Isteval was there. He's the guy on the council who injured his leg in the fight with a green dragon, and has a cane made from the bones of a green dragon.

He invited the heroes to have dinner with Duke Maldwyn and his sister (NPCs from Scourge of the Sword Coast!). The heroes had a lavish meal. The Duke bragged about his collection of magic items - Lawflame, Blackrazor, Whelm and Wave, all stuff that happened back in the D&D Next games.

Sir Isteval hates the black dragon and after some arguing with the PCs, was allowed to cast detect evil on Sparky. To his surprise, Sparky was not evil. He was taken aback.

The heroes were able to use a teleportation circle in Daggerford to return to Waterdeep.

Various members of the factions met with the PCs and tried to influence them. The harpers were mad that Varram had been killed, the Zhents were unhappy that the heroes had left Jamna's corpse behind, and I introduced them to King Melandrach's son Alagarthas to try and set up the story to episode 4.

The heroes met the Waterdhavian noble Dala Silmerhelve, who has boxed text on many different pages. She told the heroes to go to the Sea of Moving Ice to rescue Maccath the Crimson. She's a wizard who knows about the draakhorn. She may be a prisoner of a white dragon called Arauthator!

The heroes smartly asked her how she knew all this. She gave evasive answers, and for some reason they didn't press her.

The Sea of Moving Ice 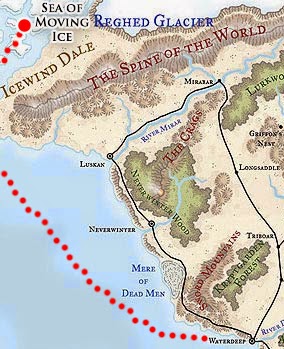 The heroes took a boat called Frostskimmer to the Sea of Moving Ice and searched for Arauthator's home.

A few days in, a few merrows came up under the ship and tried to make it lurch. This was interesting. The water is freezing (PCs who fall in must make a save or start on the exhaustion track in the PH page 291). Nobody wanted to dive in to fight them, but what choice did they have?

The underwater combat rules favor rogues. The heroes were able to drive the merrows off. It was getting really loud in the store and my players got a little over-excited at this point.

The heroes rescued an ice hunter from a polar bear, and he gave them directions to Arauthator's place - Oyaviggaton.

The adventurers went there, and tried to explore the village up on the top of the glacier/plateau. The nervous clan of ice hunters wanted them to leave, but the PCs protested.

The clan decided that one PC would fight their champion - Orcaheart! No magic, no magic items. Any assistance, magic or otherwise, would cause you to forfeit. If the PC won, the heroes could stay. If the PC lost, the group would have to give up some of their "fine steel".

Dark's dad, the rogue, volunteered for the duel. Orcaheart is very tough: 112 hit points and three attacks per round. The rogue was getting pummeled!

But, the fighter was smart. He was watching the ice hunters, keeping his eyes peeled for cheaters. He saw their shaman subtly casting a spell. The fighter rolled low on his skill check to spot this stuff. For me though, sometimes I ignore the roll. If he says he's looking, that's all I need.

Similarly, most times in a dungeon if a PC says they are looking for a secret door, I just have them find it. To me, it is enough that they thought to bring it up. I want to reward the players who think and I don't like the idea of the dice getting in the way of this (though there are plenty of times when there are exceptions).

The fighter exposed those cheating Ice Hunters. The clan grumbled and allowed the heroes to stay. The heroes were lead to a dumpy storage building and were going to be given a delicious meal. The heroes would be allowed to talk with the clan leaders on the following day....

We didn't get nearly as far as I wanted. I was hoping to get well into the dungeon, but there was too much other stuff to get through.
Posted by Sean at 3:44 AM

How did they react to stuff like the Harpers being unhappy that they killed Varram.

Wow, another awesome blog. Im a huge, HUGE fan of your monster series, please continue to provide these, they are IMO essential historical treatise on iconic D&D monsters.

Unknown: It triggered a bit of a rant by Dark as she explained that she tried to stop the "murderers". The Harpers will be quite wary of the Zhent PCs.

jburgos: Thanks! I am planning to do some more on beholders, ettins (not sure how much material is out there though),devils in general and maybe modrons.