I am a little mixed-up. I didn't realize that the tyranny of dragons season kicks off next Wednesday. I have been told that next week is supposed to be a character-making week. Is that true?

I hate wasting a session on character building. If I have enough players, I want to run a session. It feels like a waste to spend that time making characters. That can be done at any other time in the week!

I picked up the full hardcover of Hoard of the Dragon Queen. I love the paper they used in the book. It's not shiny like the 4e paper, and sturdier. I don't have to worry about my greasy fingers smearing ink. The paper also somehow makes the color on each page look very... full... if that makes sense.

The store owner had warned me the other day to expect a flood of players. Apparently there is a lot of interest in the upcoming season! I am already over the limit with 8 players, so hopefully we can get some more DMs.

It truly fascinates me that so few people want to be a DM. I sometimes almost feel sorry for the players when I run games. They have to sit there and wait for their turn. How boring. I am constantly active as a DM. I have more than enough to do. People are missing out.

We continued our exploration of White Plume Mountain, a classic 1st edition adventure converted to 5th edition. Last time, they went through the legendary tiered room and then killed an ogre mage. Blackrazor, the soul-sucking sword, was claimed by Brony, who plays a dwarf.

The adventurers doubled back to the sphinx, and headed down the tunnel to the right which ultimately leads to Whelm).

Room 3 - The Green Slime: The hallway has 1-2 feet of water in it. Algae floats on the water. Thus, this makes it impossible for our heroes to see the GREEN SLIME lurking on the floor! What a simple, clever trap.

Brony ended up having his boots and pants burned off. Most of the group wasn't sure what to do, so they did nothing (!). Brony hooked a grappling hooked into the ceiling and climbed the rope. The slime clung to his lower half, but he had pulled it out of the water. This meant that the adventurers could target the slime!

Of course, hitting the slime causes half damage to Brony as well. And even worse, a few arrows missed the slime but hit the Brony! A final devastating swipe from the flaming sword Lawflame destroyed the slime. It was a memorable encounter.

The Flesh Golem Math Puzzle: There are flesh golems with numbers on them. They give you 60 seconds to figure out which one of them doesn't belong. I won't spoil it, but it's a fairly common math question. The paladin figured it out almost immediately, and gained a flesh golem sidekick.

The Boiling Mud Platform Room: This room is a huge cavern.  Boiling mud is 50 feet below. If you fall in... you die. Far across the room is a ledge with the exit door. Haning from the ceiling from chains are short wooden discs. Basically, you have to jump from platform to platform to cross the room. To make things worse, geysers of boiling mud shoot into the air every few minutes. 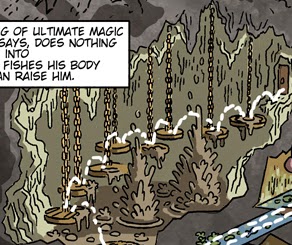 This was beyond epic. The rogue tried to jump from platform to platform. He rolled horribly. He fell into the mud. I ruled that the PCs had one round to save him before he died. More bad rolls happened, as a PC tied a rope to an arrow and shot it toward the rogue... and rolled a one. He rolled again to see if he hit the rogue.. he did. The arrow plunged into the poor rogue, and they pulled him out!

The paladin had an awesome idea. He decided to swing across the room from chain to chain, like Tarzan (or like Shia LeBouf and the CGI monkeys from Indiana Jones for you younger people). He rolled... extremely poorly. He plunged into the mud. A rope-arrow was fired into him, and he was pulled out.

Once a PC came out of the mud, I ruled that they had 0 HP and were dying. The PCs had to administer aid or give them a potion to keep them from perishing.

The party cleric had a spell called Air Walk. This allowed him to walk across the room with no trouble at all.

The group had gotten excited and loud. They had been drowning out the party wizard, who kept trying to tell them that she had spider climb. Finally, she got them to listen. They tied two 50 foot ropes together, and she spider climbed to the far side. The ends of the ropes were tied to convenient stalagmites or whatever. Now they could climb the rope across instead of jumping from platform to platform, right?

Nope! They didn't want to climb. They wanted to use it as a zipline! What a great idea. One by one, using bows or staves, they zipped across the room. The paladin went last. A geyser went off, striking and scalding him. He held on and made it across.

Once it was over, the party realized they probably could have used the bag of holding to make this trip easier. The wizard could have carried them across in the bag one at a time (spider climb lasts for one hour).

This encounter took up the bulk of the session and was one of the greatest things I've done in D&D in years.

The Vampire: In a room full of perpetual darkness was Ctenmiir, the vampire. He charmed a rogue, negotiated a bit, and finally a brawl broke out. Darkness is interesting: The PC has disadvantage to hit, and enemies have advantage to hit him. 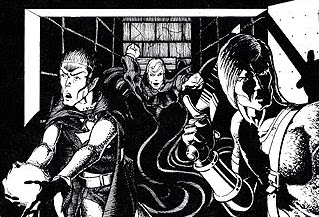 The vampire was defeated. His horde was sifted through - behold, the mighty hammer: Whelm! Brony has Blackrazor, which is one of the three artifacts in this adventure. He is a dwarf. Whelm is made for dwarves! It is +5 in the hands of a dwarf.

Brony literally screamed that he wanted it, and an argument broke out at the table. He wanted two artifacts? I explained to him that the whole group needed to come to a consensus. I could see people getting mad.

He rolled the rogue for Whelm. Brony won. He handed Blackrazor to Hack and Slash Guy. Brony has Whelm.

It was a bit of noisy unpleasantness at the end, but I'd still give this session the rare 10 out of 10. This is truly a fun adventure.
Posted by Sean at 9:44 PM

How hard was the conversion? I'm about to take the kids through D&D 5e by their request, but haven't thought about how much time it will take to convert some old favorites from basic or AD&D...

Erik: Converting took me an hour or two. It is very easy. Just pick DCs, replace monster stats, revise the artifact stats and figure out how you want to handle the "save or die" stuff. I based monster stats on stuff from the Dead in Thay monsters, but I think you could use the monsters in the free DM Basic rules pdf. Part of what is so cool about White Plume is that there is so much adventure in so few words. The module text is probably around 14 pages total and yet you will get many hours of gaming out of it.