Hoard of the Dragon Queen - Seek the Keep 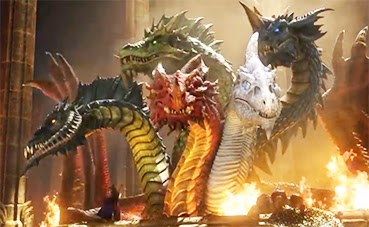 At last we have begun the first adventure of the Adventurer's League! I prepared like a maniac. I took four pages of handwritten notes on the opening episode, two pages on rules notes, and one page on league rules.

Last week, I thought I had settled this weird issue with the store owner. He suddenly wanted to do two weeks of character generation, but I'd already given the players a start date (start date = tonight). I talked it over with him last week and I thought we'd settled it.. only to find a mass email today again proclaiming that this evening was another character-making session. 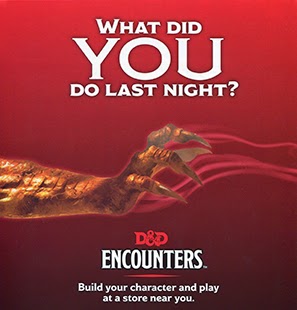 When I went into the store, the other employees had no idea I was starting the season this week. I just started it anyway. Stuff like this happens quite a bit at this store. It used to bother me, but now I kind of know the routine and in the end I just run my adventure and go about my business. The game store employees are nice people, but there are definitely some communication issues. What I don't understand is that the owner and I came to an agreement face-to-face, and then he went ahead and proceeded as if we'd never had the discussion.

I was interested to see how many players would show up for this, the opening salvo of an entirely new edition of Dungeons & Dragons. We normally get about 7 players. Tonight we had 15!

The problem was that half of them came to make a character. I couldn't run an adventure and help 7 people make characters at the same time! Eventually a store employee took that role over.

As I expected, the Brony didn't have a character ready despite ample warnings. He is one of the players who do not think about D&D or do the tiniest bit of work on his character outside the session. I honestly have no idea why he even comes. This week he ended up relegated to the "make a character" table. If that was me, I'd be very frustrated. He didn't seem to mind.

I ended up with 8 players, which is one over the limit. Hey, I'm not going to make someone leave the store. 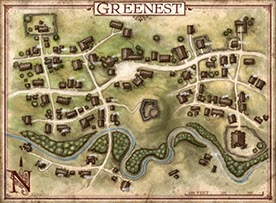 Our brand-spanking-new heroes arrived at the town of Greenest at 9 PM. The village is under attack by an army and a blue dragon! Our fresh-faced level one heroes race toward Greenest to help fend off the attack.

I tried to emphasize that the PCs should use flaws and bonds to gain inspiration but none of them bit on it, not even a little. The players might still be getting used to how everything works.

I also tried to work in some Ed Greenwood Realmslore, such as the swear: "Dark and Empty!". I really wanted to use "Blood of the Lady!" but it doesn't seem appropriate for a game store. 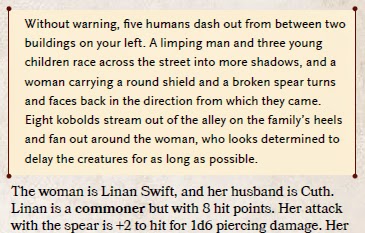 So I threw 6 kobolds at them, and the heroes slaughtered them. Then they came upon a woman with a spear and shield battling kobolds, trying to protect her husband and children. I really like that it's the wife doing the fighting. I could see one player's non-playing daughter become very interested as I described that scene. I was subtly trying to demonstrate to her that this is a game where everybody of every gender gets to be awesome. At the end of the night she decided she wanted to play next week.

From there, our heroes are meant to lead the family to the keep, the only safe place in town. I made sure to describe a few instances of the blue dragon swooping down out of the sky to roar or swipe at citizens. The dragon encounter actually comes up later, but I was doing my best to make this a complete experience. 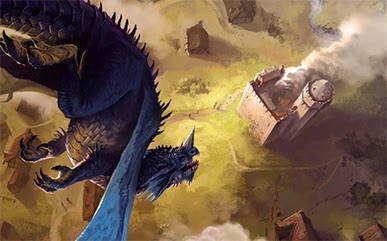 As the heroes head toward the keep, they have three encounters. The module is very vague. It lets the DM cook up whatever he or she wants. This is mostly good. Though this makes preparing the module similar to opening a ZIP file, or maybe reading a recipe and then cooking a meal. You need to look up monster stats (kobolds and cultists) and come up with scenarios. My three situations:

The heroes had the option of slipping past all of these without combat. There was a bit of debate amongst the players about doing just that. But each time, Hack and Slash Guy would declare that the town needed to be defended and he charged in.

This lead to fights where he and other PCs were nearly killed. The kobolds have a deal where they get advantage to hit enemies that one of their allies are adjacent to. So every fight, there would only be one or two PCs near the kobolds which meant that they'd get swarmed.

Characters made death saves in every fight! The paladin used up his lay on hands and most of the healing was burned through as well. Both fighters even used their second winds. 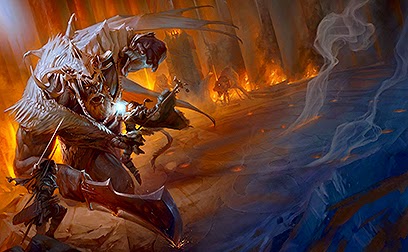 As this battle came to an end, a rift formed in the group. A new player took Hack and Slash to task - he'd nearly gotten a bunch of people killed due to his recklessness. It was fascinating to see. Hack and Slash Guy has been mindlessly charging everyone and everything for about 6 months now, and this is one of the first times a player has put their foot down. I have no idea how this is going to play out in future weeks.

I had kind of hoped the heroes would slip past the bad guys so we could get to some of the "missions". I'd planned on the heroes using the old tunnel to deal with the church of Chauntea encounter, but time was already up.

The new edition has brought in this weird changing of the guard as far as the players go. Some old timers are dropping off, and this new aggressive crop has jumped in head-first. In a way it is sad, because I was comfortable with the old bunch. Then again, the old bunch could be a bit of a headache. The old group had no idea about rules or what their character could do. This new bunch are really on top of everything and put the old-timers to shame.

The session had a bit more fighting than I'd have liked, but overall it was pretty good. The heroes each got 106 XP (I didn't factor in the 50 xp per rescued NPC yet), no gold at all, and no magic items. From what I understand, there are almost no magic items in these first few episodes. That will not go over well at all.

But I really like this adventure and I expect big things from the weeks to come.

If you haven't seen it, definitely check out this quick Tyranny of Dragons video.
Posted by Sean at 7:33 PM