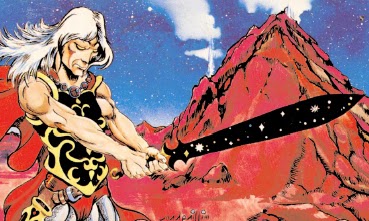 I have returned from another successful event at the game store. I am filling the gap in the Dungeons & Dragons Encounters schedule by converting the 1st edition adventure White Plume Mountain to 5th edition.

Last week, our heroes barely survived the frictionless room, with its' pits full of rusty razorblades that gave you super-tetanus! The dwarf was infected. "Where the heck is the cure disease spell", I wondered. I forgot - cure disease is bundled into a 2nd level spell called Lesser Restoration, which also heals blindness and other stuff.

When I got to the store, there were zero players. ZERO. I wondered if maybe this would be the dreaded session where absolutely no-one showed up. 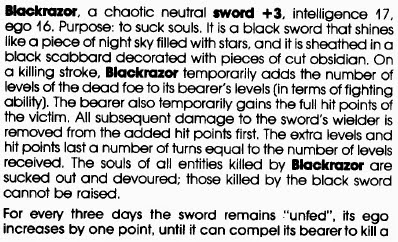 Slowly, they trickled in. They continued to trickle. I had 8 players. Two more popped in just to say hi, they couldn't stay. So, yeah, I breathed a sigh of relief all around.

This group is comprised of the teen-aged "old guard", starring Hack and Slash Guy and Brony. Hack and Slash Guy likes to run up and hack. Brony is usually more focused on eating Wendy's than running his dwarf. Like I've said before, this Encounters game is sort of like running an after-school program.

But now, there is a new faction. There are four people who have.. gasp... read the rules! Printed them out! Leveled their characters beforehand! And they don't want to go into every encounter with guns blazing. Tonight, this new extremist faction openly talked about this situation and actually considered splitting up the party in the dungeon. That would be... amazing.

They didn't do that tonight though. No, all 8 of them went through one of the most iconic D&D rooms in RPG history: 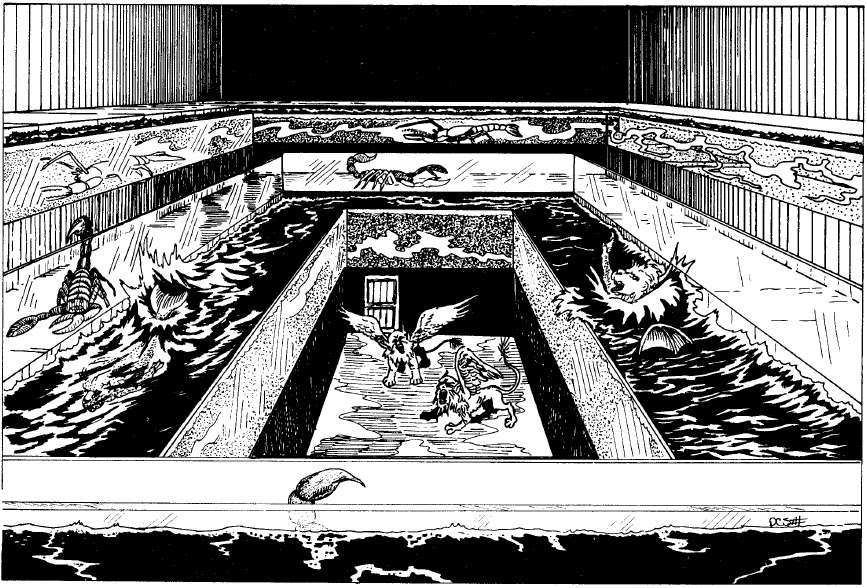 This room is hard to describe, so I have included lots of pictures. The room is terraced, with a series of giant "steps" leading to the center of the room. On each step-level is a different bunch of creatures. A few levels have a glass retaining wall that holds in water. The monsters from top to bottom: 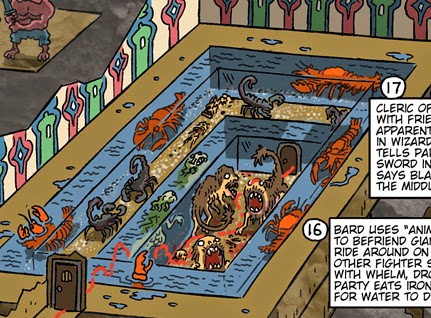 I ran this once as a kid and made a total mockery of it. I didn't know what I was doing. This was my chance to redeem myself!

I was a little worried. Couldn't the PCs just pick off the monsters with ranged attacks? Would this end up a disappointment?

Of course not. Hack and Slash charged, jumped into the water with the six crayfish and began banging his head against a glass wall, trying to shatter it. In the adventure text it is stated that a PC with an 18 strength can break the glass in 2-5 blows. In case you weren't sure, Hack and Slash indeed has an 18 STR. 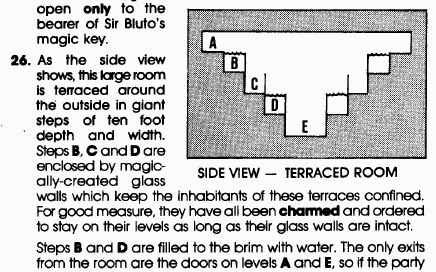 The cleric jumped in with him. Both of them wear plate armor. Both sunk under the water. It was only ten feet deep, but it was still quite amusing.

The new players fanned out like a swat team, sniping the manticores. The manticores returned fire with their tail spikes. The wizard dropped a pair of fireballs on them and wiped them out.

Hack and Slash shattered the wall and, of course, spilled down the terrace into a pile of scorpions. From here we had a chaotic melee where there was much leap-stabbing.

With the room cleared, the adventurers expertly disarmed a tap and looted a safe. Then, they soldiered on to attempt to acquire an iconic D&D artifact: 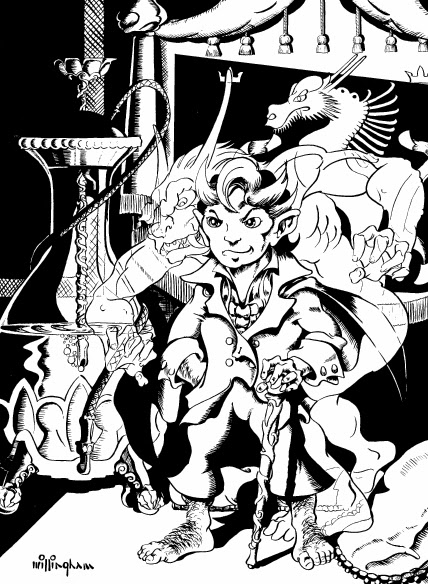 There's a halfling in here, who is actually an ogre mage in disguise. Why, I don't know. I had him tell them about Blackrazor, and how he wouldn't touch it. This made them paranoid. They literally ended up poking the sword with a stick on two occasions.

The ogre mage revealed his true form. I had statted him out using a lot of the lich stats from Dead In Thay, including legendary actions. The party took him down. The Brony ended up with blackrazor! I did not expect that at all.

You'd think I'd be used to it by now, but I still am shocked by how little we got done. I am not even sure if we will finish this adventure. We still have two artifacts to go.

It was a good session. The group is becoming too large. A split may be in order. If the Adventurer's League draws in new players, we may end up running 2 or 3 tables each week. 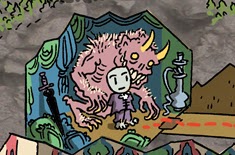 My Shadowrun game is rolling along nicely. We had our second session last Sunday. We sort of have the basic rules down and now I am doing a lot of reading, compiling a list of old Shadowrun adventures that are worth running. I am very amused by the idea of running a "retro future-wave" game of Shadowrun, with wristphones and dot matrix printouts.

I am preparing to run Queen Euphoria in a few weeks. I'll also probably run Mercurial, Elven Fire and Dreamchipper. It's funny, the more I read about Shadowrun, the more it feels like a detective kind of game. There's a lot of "legwork" and investigation. It is a fun change of pace. Plus I love roleplaying everyone smoking cigarettes.
Posted by Sean at 9:25 PM