The Citadel of Chaos

I've been running the "Dungeon Academy" campaign for 2 years now, and we're reaching the end of the Rod of Seven Parts boxed set, which I converted to 5th edition. The group right now is in the final section of the book - The Citadel of Chaos. In the citadel, both the 7th and final piece of the rod and the "big bad guy" of the boxed set, Miska the Wolf Spider, are waiting.

Miska is a weird villain. He's almost too goofy for me to use, as there is something about the two wolf heads sitting on his shoulders that just doesn't feel right to me. I can say that I do love the idea that he was created by the Queen of Chaos to be her ultimate dude (she created Demogorgon first, but wasn't thrilled with him, so she tried again).

I feel like I've done a decent job of setting everything up. I did my best to make the storyline clear, I built up the idea of Miska being a challenging foe (his blood can literally kill you if you touch it), and I have demonstrated that there are a lot of factions in the multiverse who want to use the assembled rod for various purposes.

For the last few sessions, I've been really trying to familiarize myself with this section of the boxed set, and modify it to suit my style. As written, the citadel of chaos is pretty sparse. There's some big maps and pieces of art, but the author only detailed a handful of sections and left the rest up to the DM. I've always hated this approach. I'm buying the adventure so I don't have to do that kind of work! 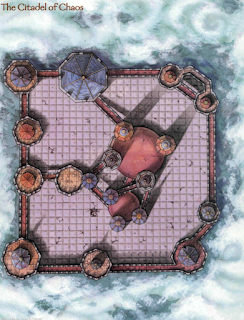 In this case, it's fine. I have a pretty good idea of what I want to happen in this place.

The Superfluous Succubus: There is one thing that I chucked, though. In the citadel is a succubus and her goristro (minotaur demon) bodyguard. They are in there trying to buddy up with Miska. This duo comes out of nowhere and are one of the most detailed things in this whole chapter, yet I don't really see how they are useful. This is the final area! This should involve the last ditch effort of the spyder fiends to take back the rod and finally kill off the heroes.

I went through the encounters, traps, and trappings presented in the book and then realigned them/fleshed them out as a sort of gauntlet that the group will have to run.

The last two sessions we did were "planning sessions," which usually I avoid like the plague because they tend to bore players. This situation is an exception, as this is the penultimate battle and I want to make sure everything is crystal clear.

This has led to quite a bit of roleplaying, and an excuse for me to play my favorite NPC - Strahd von Zarovich. He's been hanging out with the group, since the soul of his beloved Tatiana has merged with one of the heroes. Everything he does is dramatic and shadowy.

Season 3: The group's discussions and plans got me thinking about the future of this campaign. Right now, they're level 12 and they want to go all the way to level 20. Our game has basically been broken up into "seasons":
Season one doesn't really have all that much to do anything. My original plan for this campaign was to run the old 1e Temple of Elemental Evil adventure. I'd tried to do this in 4th edition, but I gave up after about 10 sessions because.. well.. it was boring.

I'm not sure why I wanted to take another stab at it in 5e, but I am really glad I changed my mind on running it. I think I like the idea of running TOEE more than I enjoy actually preparing and running it. I am positive that somebody out there can run that adventure and make it awesome, but I don't think I can.

Planning for the Future: So I spent some time yesterday brainstorming what season 3 would look like. I usually like to use published stuff, but as of now it looks like season 3 will be about the Queen of Chaos coming after the group to get revenge for whatever happens with Miska the Wolf Spider. I do think it's a very cool idea to end a level 20 campaign with a battle against the Queen of Chaos, who is an obyrith - the creator of Demogorgon! She's one of the oldest creatures known to exist! And her lair is already detailed in the Rod of Seven Parts boxed set.


I think, if I go this route, I'm going to need to compile everything I can find on the Queen and then expand on it. In those old Paizo issues of Dragon Magazine, there are all sorts of lore tidbits about the Queen sprinkled throughout.

A New Demon Prince: Also, I am very excited about the concept of the Queen trying to "build" a NEW demon lord to replace Miska. What would that creature be? How does she 'make' a demon lord? I know she uses the sibriex to help make creatures, but I'd imagine creating a demon lord would be a very interesting process, almost like the bad guy would have to go on a quest through the multiverse to get the "parts" she needs.

I actually just now had an awesome idea for this that involves things and people the heroes have already interacted with.

Reflecting on a Long Campaign: I've been cleaning up some of my old youtube posts. One of my players (Aya Golender) has been making art for me to use on my title images, so I went back on some old shows and added those in. Looking at the game, it definitely confirms my take on the natural pattern of a campaign.

I think most of us want to run a long game, right? We'd like to run it once a week, or every other week, like clockwork. Over the course of months and even years, the group plays together. You have hilarious moments, dramatic moments, thrilling moments. You get together and create the feeling that you're in an epic series of movies, TV shows, or books.

It sounds easy, but for whatever reason, I see a lot of campaigns that don't make it past session 8. Looking at my own Dungeon Academy campaign, I see a bit of that pattern play out.

In the beginning of a campaign, there is a jolt of energy. Everyone is putting their ideas on display and seeing how it all mixes together. That's a lot of fun for the first few sessions, but once the sparks are done flying and the novelty wears thin, things can become dull and even feel like a bit of a chore.

This feeling is enhanced if, as a DM, things don't play out as you thought they would. Maybe the epic moment you had planned falls flat, or you look at the players and wonder if they are having fun. You are putting a lot of work into this thing. You're doing homework! And it feels like it's not paying off.

That stuff can be really hard to plow through! I go through it in almost every campaign I run.

But the more you dig in and plug away, the deeper into the game you get and the more sessions you have under your belt. The key is to constantly monitor everything and make adjustments.

I'd say once you hit 25 sessions, you're in the clear as far as campaign fatigue goes. You don't give up, you constantly adjust, you find what the group responds to and you run with it! You will get to a point where you understand what your characters like, and then giggle to yourself when you come up with something that you know they'll get a kick out of.