Dungeons & Dragons - A Guide to the Sibriex 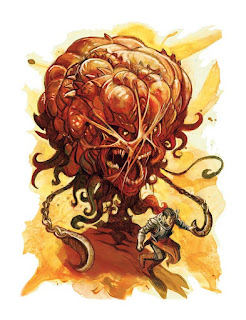 The sibriex is a monster that you'd think wouldn't have survived through multiple editions. It's very high level, so presumably not too many groups got a chance to use it. It's weird/disgusting, which I assume means it wouldn't fit the tone of certain campaigns. It has a strange role - a monster that creates and mutates others, sort of like a mad scientist.

But here we are in 5th edition, and the sibriex are still with us. Heck, there's a sibriex encounter in Baldur's Gate: Descent into Avernus.

Why? I think the sibriex is unique and interesting enough that it stands apart from most other monsters. It is an obyrith - the race of "demons" before demons existed. They have a ton of potential, which I don't think has yet been fully realized. They can create demons! They can modify bodies! There is a ton that you can do with them.

I personally like them mostly because of the above art, which appears in the 4e Demonomicon sourcebook. I can't figure out who the artist is, unfortunately, but I love this painting. This is a very "badass", heavy metal type of monster that can cause players to freak out when they see it.

Lemoriax: Years ago, I ran a Savage Tide campaign, and I swear that I had read something about how there are these fleshforges.. or fleshfurnaces.. under Demogorgon's abyssal city of Lemoriax. I had all these ideas about running an adventure down there.

But now, years later, digging through my Savage Tide stuff, I can't find any info on it! I know I had the group go to Lemoriax and the group really enjoyed it, but I just can't find anything on what lies under Lemoriax.

Lair: Make sure to check out the links at the bottom of this article. There's a guy who made a sibriex lair, complete with a map, that I thought was really cool and useful.

Fleshwarping: The sibriex warp flesh, modifying bodies, sometimes "installing" weapons or enhancements into demons or mortals. The D&D books give a little bit of info on what kind of "grafts" there are, but I think there is an old sourcebook that can give you one million fantastic ideas on cool sibriex grafts to put into your game: Chaositech, by Monte Cook. It's written in 3e rules, so you'd have to do a bit of translating, but IMO the ideas in there are so good that it's worth the effort.

"Ancient and enigmatic, a sibriex is a master of augmenting and enhancing the flesh by grafting Abyssal matter into the physical body of the subject."

Appearance:
Role:
"Whether the sibriexes had a larger goal in mind when they augmented the race that would ultimately replace their kin as the rulers of the Abyss remains to be seen."

Powers:
The Waverazer: A ship full of gnolls that was taken over by a sibriex, who has enhanced the crew with fiendish grafts. The ship haunts trade routes, capturing ships. The gnolls loot, and the sibriex experiments on the captured sailors.

The Scabwash Sentinels: In Demogorgon's Abyssal layer, there are hollowed-out stone pinnacles that contain workshop-domains of five brilliant sibriex obyriths and their numerous servitor demons. "The ocean nearby churns with the idiot gyrations of failed experiments released into the wild, while great ducts attached to the workshops constantly spew toxic alchemical runoff."

It appears that the sibriex have a deep connection to the Fleshforges, the 558th layer of the Abyss. It is ruled by a supreme fleshcrafting demon lord named Dwiergus.

Dwiergus can cover enemies in "silk and flesh", cocooning them. The victim emerges 24 hours later as a half-fiend thrall of Dwiergus, their former personality gone forever.

Appearance: Dwiergus has no set form. He's often a "house-sized thick soup of swirling demonic arms, legs, heads, wings, tentacles, and other body parts that liquify as quickly as they reform."

Dwiergus has a constant drive to convert all life into demonic life.

His few servants are soon absorbed into the Prince's mass after a short period of servitude.

The Fleshforges: The 558th layer of the Abyss, a plastic, ever-shifting realm of living hate and protoplasm.

"Other demon lords have tapped into this realm, creating smaller portal pools in their strongholds to serve as cauldrons in which they can brew new minions - several such pools exist in Demogorgon's city of Lemoriax (where he uses them to create Lemorian half-fiends, among other monstrous minions)."

Original Home of the Sibriex? "Sibriex obyriths are thought to have been born in this realm's undulant bowels - the demons are certainly the most commonly encountered monster in this foul smelling realm..."

There are lakes of organic fluid and mountains of twisted bone.

The Chitin Palace of Dwiergus: Floats above a perpetual maelstrom at the center of an ocean of molten flesh. It is an organic edifice grown from the body of Dwiergus. He can control the palace, or wear it as a suit of armor.

4e's lore diverges from the lore of other editions, so it doesn't totally match up with what has come before or since. I personally enjoy trying to utilize the 4e ideas, but I'm honestly not sure what is canon and what isn't/ They seem to leave things loose enough so you can decide what fits into your own campaign.

"When Tharizdun plunged the Shard of Evil into the heart of the Elemental Chaos, he freed the last of the obyriths from their decaying universe."

Aliens: Sibriexes are creatures of an alien universe. Their chaos manifests as a thirst for the subjugation, transformation, and destruction of all other creatures. They consider other demons to be raw material for their experiments.

The most powerful obyriths became demon lords. The lesser obyriths were absorbed by the Abyss. Sibriexes were spawned from clans of obyrith slavers, savants, and flesh crafters.

There are three types of Sibriex in this book. Chain masters, flesh crafters, and sibriex spawn.

"The flesh crafter is the artist of demonic forms, employing its flesh-warping disease to corrupt the forms of its foes."

It can create a "restraining cyclone, stun you with "crafter's madness" (does psychic damage), and can instantly warp the flesh of those within 15 feet.

Flesh Warp: There is a disease associated with the sibriex called "flesh warp." "The infected creature's flesh warps and twists into disgusting demonic forms as it slowly and painfully transforms into a child of the Abyss."
So it looks like they do have a way to reproduce!

Sibriex Spawn: "The foul nature of the sibriexes can infect other creatures, creating vile spawn beholden to more powerful masters.

These guys are "minions," which in 4e means that they have one hit point. They can bite, have an aura that does psychic damage, and when dropped to 0 hit points, they explode and their bile does acid damage.

"Thought to be as old as the Abyss itself, sibriexes haunt remote parts of the plane, where they use their vile abilities to breed new horrors and apprehend forbidden lore."

Blood and bile cascades from their body, which pollutes the ground around them.

Plants around them wither and the ground becomes difficult terrain. Just being within 30 feet of them does poison damage.

Powers:
So they changed it up a bit. You don't become a sibriex spawn any more.

Keepers of Forbidden Lore: Even demon lords sometimes seek out a sibriex to learn secrets and knowledge.

Demon Crafters: They channel the power of the Abyss to create new demons from other creatures. They can create vast numbers of rutterkins over the course of just a few days. "Some demons petition sibriex for physical gifts.."

Then we get my favorite D&D thing.. a random flesh warping chart! Whenever a creature fails a saving throw against the sibriex's Warp Creature effect, roll a d100 and consult the chart. My favorite results:
Baldur's Gate: Descent Into Avernus

In this adventure, the heroes end up in the first layer of Hell. They drive around in magic war machines, accomplishing various tasks. There are a TON of encounters in Avernus.

One of them involves a sibriex! Check out page 117 of the book.

The pit fiend Bel's agents have actually captured a sibriex. They've been torturing and interrogating it for a long time. "The sibriex is restrained by infernal chains from Bel's forge that also prevent it from using its spells or actions to escape."

Two chain devil guards watch as an arcanaloth named Fetchtatter asks the Sibriex about different topics, but the sibriex is becoming obstinate.

Fetchtatter will give the group 3 soul coins if they can get the sibriex to talk.

The sibriex uses its telepathy to contact the heroes, offering information in exchange for freedom.

Freeing the Sibriex: Breaking 3 of the 6 binding chains frees the sibriex.

"A creature can willingly submit to flesh warping, an agonizing process that takes at least 1 hour while the creature stays within 30 feet of the sibriex. At the end of the process, roll once on the Flesh Warping table to determine how the creature is transformed permanently."