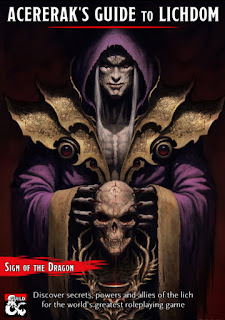 You can buy this product on the DMs Guild here.

I've been doing research on liches because my Dungeon Academy group, who call themselves the "Lich Slayers", are about to wrap up playing through the Rod of Seven Parts boxed set and I'm planning for the future. I thought that it might be cool to have them fight every type of lich that there is, but then I saw what was out there and frankly, some of them are lame.

I do plan for the campaign to be somewhat lich-centric, though. I thought about it for a bit, and I realized that in all the years I've been playing D&D, I've almost never seen a group go after a lich's phylactery. They fight the lich, and move on.

So now I'm thinking that the Lich Slayers will definitely hunt down a phylactery or two before the campaign is over. That brings me to the question of how a lich protects their phylactery. Bury it in a deadly dungeon? Who do they trust to guard it? Do they dare just hide it somewhere innocuous and hope it doesn't get noticed?

I checked to see if there was any lich stuff on the DMs Guild to help me with this dilemma, and I came upon Acererak's Guide to Lichdom. Cool name! Awesome cover! Let's check it out and see if there's anything in there we can use. 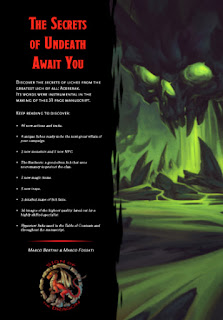 We start off with a pile of powers you can give your custom lich. Here are a few:

I LOVE these! Very useful. Some of them help "translate" lich abilities from old editions into the 5e system.

There's a big pile of traits for lich statblocks. Here are a few examples:
There are really great. The book is already worth getting.

This section is a bit broad. I was hoping for more detail - actual strategies for liches to use. 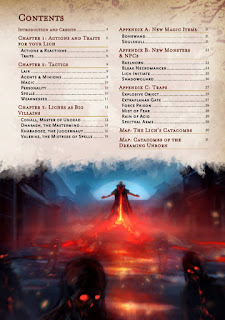 This chapter has a four unique liches all statted out for you.

The focus here is on stats rather than lore. The stat stuff is really good! Personally I'd like more story stuff to go along with the stats, but it seems like the author knows his strengths and plays to them. I would guess that most people who buy this book won't mind at all.

There's just 2 magic items here. One of them is an item called a soulskull. Basically, some liches can use the skull of a slain foe, and trap the victim's soul in their skull. The lich can then absorb the skill to fully heal themselves!

This is a very interesting way to describe how liches feed souls to their phylacteries. I never considered the idea of the lich also gaining a statistical benefit to consuming a soul.

Baelnorn: Hey! They statted out the baelnorn! That's the elf lich, who, in older editions, had a good alignment. Here, they are lawful good as well!

These baelnorn do not have the power to make intangible shadow selves that they use to scout an area, though, which is a bummer.

Bleak Necromancer: These are mortals who serve a lich. They have a "grave stench" aura that poisons, fire death bolts, and can drop bursts of necrotic energy.

Lich Initiate: This is a wizard who serves a lich. I got excited thinking these were wizards who were preparing to become a lich themselves, which is something that could be really cool.

Shadowguard: I love this idea. Those sacrificed by a lich don't just die, their remains become a shadowguard - an undead shell that serves the lich. Really cool. A lich's lair would be full of these things, remnants of victims whose souls have been devoured. I'd like it if there was some way to save them or give them a bit of revenge. 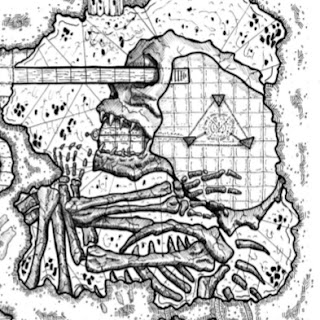 There are a bunch of detailed traps. There's an extraplanar gate, which spews shadows and, if entered, imprisons you in a demiplane of shadows doing 55 damage per round! Egad.

There's a bunch more, all of them are pretty cool.

Then we get a great map of the "Catacombs of the Dreaming Unborn" by Marco Bernardini, which is absolutely top notch.

This thing was worth the 5 bucks by the time I got to page 8! Very, very useful product if you're going to run a lich. It is short on flavor and heavy on stats, but I don't see that as a bad thing at all.
Posted by Sean at 3:44 PM