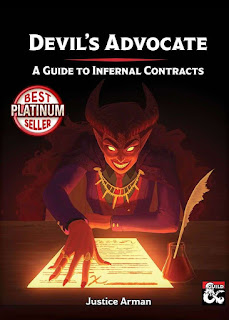 Devils make contracts with mortals. It's what they do. In D&D, this has always been a pretty vague thing in terms of how the rules work. But now, in 5th edition, we have some pretty concrete rules that can be used to make contracts be a more involved and integral part of a D&D campaign.

I'm going to go over the official 5e rules for infernal contracts, the Pathfinder rules, and the rules in a 5e DMs Guild product called "A Guide to Infernal Contracts" to see if I can understand them, and to compare them and see which set of rules work best. Here are the products this information comes from:
I am thinking that I am going to like Pathfinder's rules best, as they have a whole thing going that I really like. The 5e rules are a bit too vague for me. 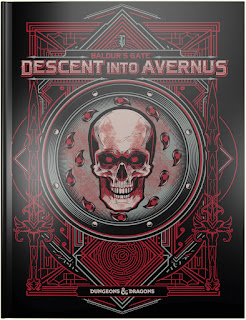 Check out page 212. This is the official 5e Infernal Contract info. Who can make contracts?
Offers: The devil offers a gift, the character names a price (usually their soul). Devils can offer various things depending on how powerful they are. Check out the list on page 214.

Voiding a Contract: Voiding a contract releases all parties from the deal, no strings attached. The devil and the character can agree to this. The devil summons the contract with an action, and then it crumbles to dust once both parties agree to void.

Devils will want compensation for this. They might want soul coins, gold, sacrifices, or an artifact.

Charms: On page 215, the book lists charms that archdevils might us as gifts for mortals. These are really good. There's a charm of agelessness, a charm that lets you summon a horned devil that serves you for 9 days, all sorts of stuff. 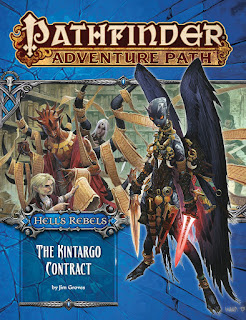 In the back of this book on page 63, there is a section that describes the Pathfinder rules for infernal contracts.

In Pathfinder 1st edition, there are "contract devils," also known as phistopiluses. Most devils can make infernal contracts.

Negotiating: The devil provides whatever the mortal requests, and in exchange receives the mortal's immortal soul, to be delivered to the devil at the moment of the mortal's death. "Some devils, like pit fiends, can grant wishes, effectively giving a mortal almost anything she desires..."

Price: Devils usually want a soul, but sometimes accept an artifact or the murder of 1,000 innocents (!), stuff like that.

Creating the Contract: Contract devils have the ability to magically create a contract. Other devils use an intermediary, someone in Hell who makes it for them. Creation times range from days to months (later on in this section, there are special contracts listed, each with its own creation time).

Some devils travel to Dis (the second level of Hell) and train in the making of contracts. They gain a feat called "Infernal Legist."

One note in the listing of this feat: "As long as the infernal contract remains in effect, the victim cannot be restored to life after death save by a miracle or wish."

Knowledge Points: All infernal contracts have a "knowledge point" score. These act in a way similar to Hit Points.

Researching a Contract: Reading an infernal contract can take hours or days.

To research a contract, a character needs to make a Linguistics check. This takes 8 hours of uninterrupted research. Up to two characters can aid another on the check.

Success on a check: This is a little complicated. Succeeding reduces the knowledge point score. Bards reduce the score by 1d12 + their INT modifier. Other classes have lower results.

If a character reduces the knowledge point score to 0, they discover a flaw that could allow for an early termination in the contract. A mortal could exploit the loophole to terminate the contract. Sample loopholes appear on the contracts listed on pages 66-67.

Failing two checks in a row causes the researcher to hit a dead end, and no more attempts can be made. The researcher has misunderstood the contract's terms!

Escaping an Infernal Contract: When a contract is signed, two copies manifest. One goes to the mortal, one goes to the devil. Mortals can do whatever they want with their copy. Devils generally either keep them close at hand, store them in vaults, or file them away in a secure facility in Hell (usually in Dis, the 2nd level of Hell).

Transferring a Contract: Sometimes a devil can be convinced to adjust a contract so that it applies to a different mortal, if the other mortal consents to take it on.

Destroying a Contract: If both copies are destroyed, the contract tends. If the mortal signee has died and their soul is already in Hell, the soul remains in Hell unless some bold adventurer goes down there and rescues them.

Sample Contracts: Each contract has a hidden condition, a termination clause, a complexity score, and more. The complexity score calculates the DC for the research checks. The contracts are also given a CR score to represent how powerful they are in comparison to one another.

I'm going to talk generally about what each contract does, but I don't want to spoil them by revealing their hidden conditions and termination clauses. So here's a light overview.
As far as rolplaying games go, I prefer D&D 5th edition rules to Pathfinder 1st edition rules. But, I absolutely love the "mini-games" that Pathfinder creates that give things like this infernal contract stuff a more concrete feel. Each contract basically has hit points ("knowledge points") and you can do damage with extensive research checks. I love it.

It's more complicated and is a real wall of text for me, but if you take the time to dig through it, and absorb each piece, it can add a ton to a game. 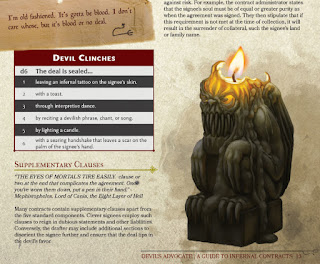 This is going to be a review as well as an information hunt. I love the cover. We start off learning about some contractual terms:
The ultimate goal of a devil: Acquiring a soul at its lowest possible cost.

Consideration: Both the devil and the mortal must incur some burden to have a valid contract. Otherwise, the offer is a gift, and devils don't give gifts.

Life-years: Sometimes, instead of giving up their soul, a mortal can agree to sign away a portion of their remaining mortality. The signee must serve a fiend for that amount of time once they have died. Once the time is up, the soul is free to proceed to its original planar destination.

Offers: Identify the number of life-years that the signee is putting up. Then consult the Offers table on page 9.

One thing I really like is that higher level characters who hand over their souls can get different things than lower level characters.
Obligation: The legal duty of two parties to perform. If either party violates this, they may face harsh punishment according to infernal law.

Fine Print: Heroes can scour the fine print with Arcana, History, or Investigation. The DC varies, ranging anywhere from 15 to 25+. There is a list of possible entries in the fine print. One I like: "The benefit conferred upon the character is taken from someone else."

Acceptance: Signing the deal might include a toast, leaving an infernal tattoo on the signee's skin, or other entries on the "devil clinches" table.

Collection: "It's common for a signee to struggle or attempt an escape when their time runs out." Devils sometimes send "collection agents" to go deal with the mortal. What an awesome idea! There are three types:
Then we get a section on drafting a contract - how it might look, and words that might be used in it. There's actually a list of latin phrases to include, such as "campos menits" (of sound mind), "in curia" (in court), and "periculum in mora" (danger in delay).

Appendix A has stats for the Collection agents. The "bloodhound" hell hound has this power: Planar Tracker. The bloodhound knows the most direct path to a tracked creature. If the creature is not on the same plane of existence as the bloodhound, it knows the closest arcane portal to that plane.

Right at the end, there is a sample contract.

This is an AMAZING DMs Guild product. The idea of collection agents is so great. It boggles my mind that nobody has come up with it before!

I'm not totally sold on the idea of life-years. It's a little confusing. I think I'll stick with handing over your soul, for the most part.

I still love the Pathfinder rules, but I think going forward in my games I'll use a hybrid of all three books to depict my contracts. The DMs Guild book has tons of extremely useful details. It really spells out the whole concept in a way that is inspiring and easy to digest.
Posted by Sean at 3:39 PM

I bought the DMs Guild product and love it, but I found myself confused by life years too. For instance, do you hand over an objective number of years, or is it a percentage based on the total? So Elves and Dwarves still lose a lot?

Does it REDUCE your total lifespan, or is it just an amount of years you are going to serve afterwards? Suppose I am going to live 100 years. I'm 20 years old. I hand over 70 life years. Does that mean I die at 30?

Stuff like that... I need to look up the exact passage since it had to do with the kind of deal you got.

Sean, are you going to finish your guide to Dragon Heist?

Wow, this is some serious info on Mordenkainen, that must have taken some work. I haven't read through it all, but it's really cool stuff. I just learned (relearned) Mordenkainen was Gary Gygax's own character a few days back so this is perfect timing for me.