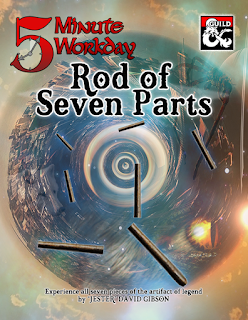 While I was putting together something else, I noticed this product on the DMs Guild. I am right now running a Rod of Seven Parts campaign and this seems like it could be real handy. It's only 50 cents, so what the heck, let's check it out!

You can buy this right here on the DMs Guild

I have written a few articles about the Rod of Seven Parts:
We start off with a synopsis of the history of the rod, which is more or less a summation of what is written in the 2nd edition boxed set.

Then we get the statted-out rod. This should be handy!

"If targeted by an effect that could unmake it or if it’s placed in a situation where it could be destroyed, the rod teleports away 1d100 miles in a random direction."

The tendency to scatter has actually killed my previous attempts to run this campaign. I tried once in 2nd edition, once in 3rd, and once in 4th.

"Every time the wielder uses a resonance property of the rod or property gained from having 2 or more pieces they roll a d20. On the result of 1, the rod is sundered and each pieces teleports away 2d100 miles in a random direction."

On one hand, it's cool to have the rod be so volatile. But I've seen this type of thing make the players want to give up, especially if they aren't even aware that the rod might do this!

This is a power in the 2nd edition boxed set which I have, so far, discarded entirely. The rod makes the wielder more lawful and imposes personality traits on them. Depending on the player, this could be a lot of fun or a character-ruining experience.

In my campaign, the wielder is Lilia, a cheerful gnome who believes in goodness. I feel like the rod's law powers as described in the 2e boxed set would hurt more than help, so I've ignored it.

The author has transformed the lawful stuff as "flaws", which seems like a very cool idea. Here are a few examples of the seven flaws:

"I will not knowingly violate the letter of the law, no matter how absurd that law or how minor the infraction."

That one could get weird, especially if your player is in a mood.

Lilia, the wielder in my game, is extremely emotional. I just don't see much upside in implementing these.

"I take everything I hear or read absolutely literally. I lack any understanding of sarcasm, metaphor, or symbolism."

All of the powers are converted to 5e here. Very handy!

In general, with the rod, I've found that it has so many powers that it can be confusing. The rod has three sets of powers:
This is awesome, but, weirdly, my group almost never uses the rod. At all! Never! Part of it is that they know that, when the rod is used, the Queen of Chaos might sense it and open a portal for her demons to attack.

But right now, they are in Sigil, a place that the Queen can't open portals to. And still, they don't use it.

This is one of my favorite things about assembling the rod. Putting it together is intense! Combining two pieces is a process that takes hours, special ingredients, and ability checks. Failure means at least one piece vanishes and teleports somewhere far away.

My group went through this a few times, but as I realized that they had a chance to actually get all 7 pieces, I decided I didn't want the campaign to possibly collapse due to a failed check. So I had them find these spelljammer alchemy plants that produced an ingredient that would prevent the piece from teleporting if the check was failed.

The author has reduced the amount of time it takes to assemble the pieces, but did keep the ingredients (which includes the hair of a lawful creature and a chaotic creature).

Then we get stats for a few different types of spyder-fiends and Miska the Wolf-Spider, the big bad guy that the Queen of Chaos is trying to set free.

Looking at Miska's stat block, I think his damage should be raised a bit.

The most interesting thing is that, in the boxed set, it says that Miska's blood can kill you! As in, if you hit him with a melee attack, his blood sprays on you. You must make a saving throw and if you fail, you die!

In this book, the author understandably changes it to poison damage.

I thought about this quite a bit, and ultimately I decided to let Miska's blood be lethal. After all, the whole story is that it was Miska's blood is what caused the Rod of Law to shatter into the Rod of Seven Parts to begin with!

To make this fair, I had a wind duke warn the group about Miska's blood in our last session. He told the group's ranger that her ranged attacks will likely be the key to defeating Miska.

The author gave one type of spider "iridscent webbing," which blinds you. Very cool. Another type throws venom grenades! Love it! I'll definitely try out these stat blocks in the coming weeks.

This pdf is 7 pages long. I can see that a lot of work went into it. Converting those stat blocks is a pain in the butt, and wrestling with the insane powers/re-categorizing everything for 5e takes time and effort. The rod is a centerpiece of entire campaigns!

It bums me out to see that the author priced this at just 50 cents. It looks like this was published in 2016, when the DMs Guild was just getting started.

But the author deserves more. In the DMs Guild, you make half of what people pay, and the other half goes to the site. So that means with each sale, the author makes a quarter!

From what I understand, the majority of DMs Guild products sell under 50 copies. Selling over 1,000 copies of something is a major success! So that means that the author busted his butt and probably didn't make a lot of money, which is a bummer because this is a very useful product.

What's the minimum you would pay for a DMs Guild product? $2? $3? I would have had no problem paying a few bucks for this, as it is worth it and will definitely be useful.

I'm not a fan of forced character changes, BUT I feel like the ones that the Rod causes are necessary for highlighting to the party that "Extreme law is just as bad as extreme chaos". It's the same reason there are Wind Dukes who want to restart the war, why the devils want the Rod, and so on. If either side "won", the universe would lose. The Rod is dangerous--it's not a toy, and it honestly might be better for everyone to destroy it than anything else... but that is up to our heroes to decide!

The wielder of the Rod in my game was Mye-kuhl Jancer the Necrodancer, who was as Chaotic Neutral as they come--loved dancing, teaching other people to express themselves, being free! But as they got more pieces of the Rod, it corrupted him with its unerring order and turned him Lawful Neutral.

The rhythms that guided him became less about expressing oneself, more about adherence to a beat; he said some very insensitive things to friends and family, and began to alienate them, because he couldn't lie or prevaricate like he used to; and he chose to do a lot of morally questionable things for "the greater good" or because he considered himself the only rightful authority--he didn't need anyone else's approval because he was the ultimate Law in existence. It provided a lot of fodder for adventure in the 30 sessions between the side effects appearing and Jancer being separated from the Rod by dying/coming back as a clone.

The important thing, I think, is to remember when roleplaying that the PERSON is the same--their viewpoint just shifts. How would that person act with this new viewpoint?

DM's Guild pricing is tough. Like, I put together some brewing rules, which I thought about throwing on for PWYW. Then I think "ehh, maybe 50c", and then I see things like your work and I'm like "can I really justify even 50c for what I did" lol.