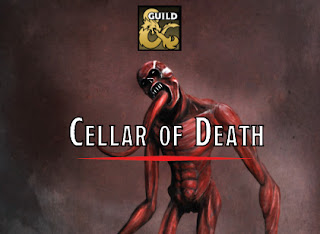 You can buy Cellar of Death right here.

Howsabout we look at one of the DMs Guild Adept Tomb of Annihilation tie-ins? This one is called Cellar of Death, created by James Introcaso.

This adventure is for level one characters (!) and it actually takes place in the Cloakwood over on the Sword Coast. This adventure explains who the lich was that told the Harpers about the Soulmonger at the start of the Tomb of Annihilation book.

This one actually begins with the group creating an NPC that everyone is linked to. Then we get to the intro boxed text and that NPC is dead! Killed by the death curse! Cracked me up.

I think some groups will love this. Each character gives a eulogy. Very funny idea!

The group gets involved in a raid on a lich's tower. The Harpers (a band of heroic adventurers) will attack it while the heroes slip inside and steal the lich's phylactery.

It talks about taking rests. The Harper assault is over an hour? If I was playing through this, I'd assume we've got 15 minutes, tops.

I really like the lich. Her name is Zaldara Cordress, the Duchess of Rot.
There's a fun skull-face trap and another sea-monster-themed door trap that I really like. 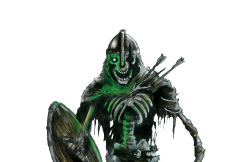 There is a gem chamber that has an effect that I love! This dungeon feels just a little Dungeon Crawl Classic-y, which I like a lot.

Here's a tremendous quote for you: "The ghouls take baths in the blood fountain."

There is a note saying that if the heroes try to go out and help the Harpers, a monster forces the adventurers back down into the cellar. I think it would be better to just have the Harpers yell at them: "What the hell are you doing?!" If the adventurers stay out there, the lich annihilates them.

There is a room with a water trap that I really like, but I don't quite understand where the trapdoor is. It sounds like it is set into the floor. The author has great rules for getting the doors open. He made sure to make it take more than a single die roll to open the sealed doors.

In the treasury, an iron chest sits between two humming pillars. I can just picture players going "uh oh" when they hear that description.

Once the phylactery is obtained, the group will have to contend with a severely injured lich! She only has 1st and 2nd level spells left. Her casting a Melf's acid arrow might off a character. 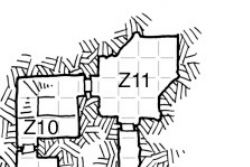 I like this one a lot! I can just picture myself running this for new players. I think it would go very well.

This is an adventure that you can drop into any campaign. It is not jungle-themed and it can be used in many different ways.

I really appreciate that the author kept it so short. It's 10 pages, plus a map and monster stats. In those 10 pages is a dungeon with 13 rooms, and more. Each room has its own fresh gimmick, described incredibly succinctly. That makes this adventure ideal for DMs, because it is so easy to prepare.

I personally love that you actually rub elbows with a powerful monster in this. Some players might expect her lair to have higher DCs and effects, which could cause some meta-gamey problems.

I notice that, as far as I can tell, it is possible to get the phylactery after passing through just two rooms. At first I balked at this, but then I saw that the heroes have to make their way through the prison, which is potentially five rooms in one.

I would say that the title kind of undersells the content. I'd prefer something like "The Duchess of Rot", as it has a little more spice.

People praise Phandelver often, but I'd run this adventure over the Cragmaw Hideout any day. This dungeon has a heck of a lot of ideas packed into it, it's really easy to prepare, and it seems like it would be a lot of fun to play through.
Posted by Sean at 1:07 AM

Great review as usual! I'm planning on actually running this as my introduction to Tomb of Annihilation, so it's great to see you do a review of this. One thing I noticed is this: "Once the phylactery is obtained, the group will have to contend with a severely injured lich! She only has 1st and 2nd level spells left. Her casting a Melf's acid arrow might off a character." That only happens if the group runs out of time. If they make it before two hours are up, then they simply face a 10 HP out-of-spell-slots Lich, who with Ray of Frost can still deal 4d8 (average of 18 cold damage) as a legendary action (so incredibly powerful nonetheless)...

I'm currently running this adventure as a prelude to ToA (we play 2-hour sessions so this will take another session to conclude). My players are really enjoying the atmosphere. They especially enjoyed the NPC building and were shocked when we started at their funeral. I really prefer this opening to the opening suggested in ToA, which is frankly insulting. You just get teleported to another continent by some lady you just met? What?

Anyways, just wanted to point out that the passage from the dungeons actually leads below the phylactery room and goes straight to the water trap room. It's not obvious but that's how it's designed. You're right that the water trap room is a little confusingly worded. I think the skeleton needs to be reaching for something obvious like a sword or a potion while caught in the trapdoor or else they have little reason to interact with it.

My DM ran this one as the start of our Tomb of Annihilation campaign. We started with a human barbarian, a wood elf druid, a mountain dwarf cleric, a wood elf ranger, a tabaxi rogue, and a tabaxi warlock. By the end, only the barbarian, cleric and ranger were still alive!

I grant you that this was mostly due to the rogue being an idiot and then the warlock being useless, but that's neither here nor there. It may be build for a level one party, but it is STILL a lich's lair and it is in no way easy.

It is still a very good adventure to help set up the Tomb of Annihilation. And for DMs, if your party cannot even survive this with a level of competence then the tomb itself will end them hard.

I really like to run this adventure as a one-shot, despite the greater story ending up unresolved. I suppose one could remove references to the death curse and exchange it with an arbitrary piece of information that must be extracted from the lich, but I have yet to really think about it.

The NPC creation followed by the funeral scene is genious and achieved the intended result for my group: They cursed that they couldn't meet "the awesome dragonborn governess who died saving children from here burning orphanage" and it served to connect and motivate the party.

I ran this for three 2nd-level characters instead of more 1st-level ones as written and it worked pretty well. The warlock even got separated by the teleport trap and had a few exciting solo encounter.

I was cautious of the specters after I ran Death House and I'm still considering replacing them. They are very lethal for 1st-level characters with a bit of bad luck, and they were threatening enough for my 2nd-level party.
They are also a slog to kill, with only a few damage types having full effect. Seeing how they come at the end of the adventure, it's possible that a wasteful (read: inexperienced!) group has happily blastzed through their limited resources. Although I guess that chance is a little lower for a larger party, even if they are a level lower.

I would definitely replace the specters in this adventure. Running this as an intro to Tomb of Annihilation you have to remember that anything that reduces hit point maximum is permanent, as it states the curse is already in effect.

"A humanoid whose hit point maximum is reduced can't increase or restore it." (ToA, p.7).

Each hit reduces their HP max by 3d6 on a failed Con save, this will outright kill many level ones or make them unable to continue to the actual adventure.