I was determined to finish this adventure on Monday night. This is session 3 of my attempt to run a modified version of "The Dancing Hut" using the Dungeon Crawl Classics RPG rules.

As I have mentioned previously, the original Dragon Magazine version of this adventure leaves out a lot of details for the DM to fill in, which is annoying. I was able to use the 4th edition version of the adventure to fill in most of the gaps.

But I still had a problem - this place is supposed to be full of magic items, and I had few to choose from. So I dug items out of another source - Pathfinder's Reign of Winter adventure path. This is an entire adventure path about Baba Yaga!

I almost ran Reign of Winter when it came out, during my traditional hemming and hawing campaign planning procedure. I have almost-ran many a great campaign. I spent months working on a Castle Greyhawk campaign that I ultimately decided not to run. I spent two months prepping Spelljammer, which I have pretty much decided against running. And Age of Worms has been almost-run on three separate occasions! 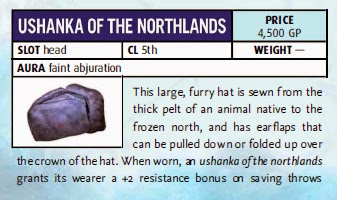 Reign of Winter is loaded with perfect unique magic items to place in the hut. I loaded the place up with DCC versions of these things, which includes a magic ushanka (furry hat with ear flaps) and a magic snowglobe that creates a blizzard in a two mile radius when shattered.

The store was thankfully less crowded tonight. Last week, the noise was unbearable. Usually Monday nights are full due to Magic tournaments, but lately there has been a massive drop-off in Magic attendance. I don't know what the deal is with that.

Since we run Adventurer's League stuff in the store, we got the 5th edition Dungeon Master's Guide early. I bought it and am working on a review. It is a really, really great book. And it even has a full page image of baba yaga's hut! 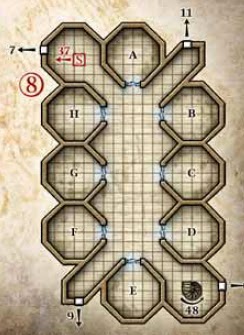 If you recall, our heroes are in the hut because an evil double of a PC is an apprentice to Baba Yaga. I had Vladmir the telepathic cat guide the PCs through the hut, to cut down on wasted time.

The heroes came upon a bestiary/zoo, which I stocked with a bunch of monsters and references to my other campaigns which nobody else would get, though if you read this blog you would. I put a Predator in a cell, which caused the players to explode with laughter. Robert Downey, jr. was in another. I don't think I ever told this story, but last year I ran a session of Dungeon of the Bear with some new players. Short version - one of the newbies really wanted Robert Downey, jr. as her sidekick.

Basically our bad guy opened a cell and unleashed a DCC RPG hydra on the PCs. On paper, the hydra didn't look so tough. It had 7 heads, each head had 7 hit points. When you "kill" a head, two more grow back two rounds later. So basically, you have to chop off all the heads to kill it.

It was a little - a lot - more deadly than I anticipated! We came real close to a TPK, but the heroes persevered thanks to the use of some barrier peaks grenades.

Smirnoff the accordian player was torn to shreds. His little cymbal-playing monkey named Bristly was sad, but the heroes cheered him up. They have done drawings of him in real life, and insist that his name is "Mr. Peanut". I don't know why. 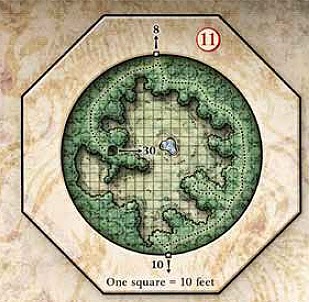 This room has a lake with two "elf maidens" in it who beckon to the heroes. The heroes were wary, and decided that Robert Downey, jr. should go hit on them. He did. He rolled well. The PCs decided he'd be safe here and continue on.

They didn't know that these elf maidens were hags in disguise. As soon as the PCs left, they tore Robert to shreds. Poor guy could never catch a break in my campaigns.

This is where I loaded up the treasure. I altered this to have a single basilisk guardian. I figured Baba Yaga's good treasure was elsewhere. This excursion into the hut is really her testing her apprentice and the PCs for a special mission.

The Daughters of Baba Yaga 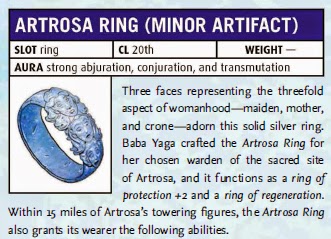 Somewhere around this time, the heroes met with Baba Yaga's adopted daughters.

Natasha the Dark: An evil, raven-haired sorceress. In some D&D editions, Natasha is said to actually be Iggwilv, the legendary villain from Lost Caverns of Tsojcanth and the Savage Tide adventure path. The heroes had an awkward meeting with her and moved on.

There's a chasm in here. If you fall in, you take a one-way trip to the astral plane.

A PC decided to fly into the chasm to check it out (he got bat wings from Slaughtergrid). And.. poof. He's gone forever. And of course, he's the one the evil double is trying to hunt down and kill! The double would have to settle for trying to kill the PCs, and then beg Baba Yaga to take the hut to the astral sea to finish off his rival. 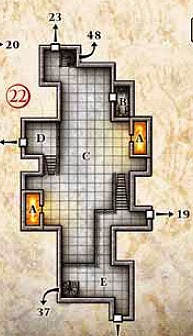 This room is super-hot. You take 1 point of damage per round you are in it. In here are fiery beings called salamanders who are putting the finishing touches on a magic sword.

I have one player who is obsessed with magic items. He couldn't resist. He went in alone, took out the salamanders and snatched the sword. It was a cursed berserking sword. So basically, he was filled with the urge to murder his own allies.

An epic battle took place. The party rogue used her ring of super-muscles (also from Slaughtergrid) to wrestle him to the ground and disarm him.

Then another PC decided to pick it up and throw it into the chasm. As soon as he picked it up, he began berserking.

These kind of scenarios are very old school and should be used with extreme caution, but wow... it was effective.

The PC was subdued and the cursed berserking sword was moved without being touched directly. The heroes chucked it into the chasm.

So... there's probably a bat-winged dude with a cursed berserking sword rampaging across the astral sea.

A good old-fashioned healing fountain! This was useful. DCC is a super-deadly game, so this fountain was used quite a bit over the course of the session. 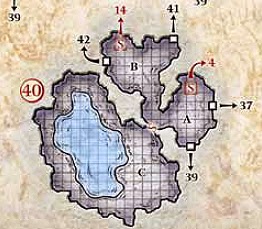 This room is where the pool is that makes doubles of people. The bad guy was waiting here with some diakkas (bird-servants of Baba Yaga).

He had these magic boots from Reign of Winter which can turn you into a frost giant for ten minutes per day! An epic battle was had, with the dwarf hanging from the giant's beard and crowbarring it to death (with her crowbar - her pulse rifle had been destroyed).

Once the bad guy was slain, the PCs met with Baba Yaga. She wanted to cut them a deal: They could have the hut for a time if they would kill a mutual enemy of hers - Noohl of the Court of Chaos.

This campaign is ending soon, so I want to finish it with a bang. I am going to give the PCs the hut in its' magic item form and let them use it to battle a major enemy.

The hut is cool, but the original version is not fleshed out enough! You also need to create a reason/goal for the PCs to explore it. It's a classic adventure, everyone should probably play a version of it at least once.
Posted by Sean at 7:59 AM

Kyle: Yep! Good eye! Mike Schley is awesome. He did every single room of the hut.