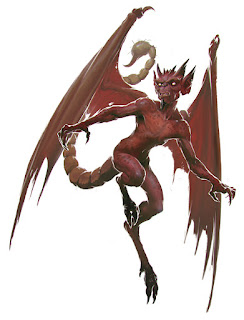 Episode 88 - The Awful Crew
Chris actually becomes a player for this episode!

Last time, the group tricked death and learned how to use a shadow crossing

Strix has polymorphed her friends into mice. They're hiding in her hat as three hags confront her. The hags:


The hags want some hair from the heroes. The group decides to do it. Yhey think that maybe the hags can bring Evelyn back.


Meanwhile.. in Port Nyanzaru.. there's another Strix, Paultin an Diath walking around. They're third level.

Chris gives the DM chair over to Anna!

The group describes the Awful Crew:

Diath has a bodybag - a sack of evil. When you put bodies in it, the bodies are transported to the hags. It only works on evil people.

Umpox is usually invisible. When not, he assumes the form of a rat, a raven, or a spider.

Strix snatches a rat off the street and bites its head off as she scans the area for evil creatures.

They don't spot any evil creatures. Paultin decides to cast crown of madness on a fishmonger and have him start beating people with fish.

They spots a young girl creep up, steal a fish, and flee.

They grab her. Diath asks her, "Hasn't anyone ever told you that stealing is wrong?" He sticks her in the bag. He makes a performance check to make it like a magic trick to throw off bystanders. Rolls a 19!

They're good for the day. They want to go get a drink. Strix wants to burn something.

Three dinosaur riders take offense to this and chase the group.

Diath tries to jump onto a rooftop and do some assassin's creed maneuvers. Doesn't go well.

Paultin checks his pocketwatch and sits down in an alleyway that has a hipster alley bar. He grabs a table. 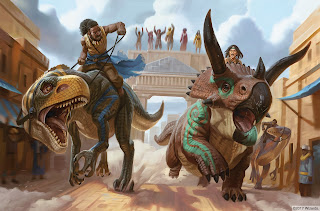 One of the dinosaur riders is a huge, muscled dude. His name is Shmon Shmeena. He's wearing jorts. He punches the imp.

Paultin abandons the group and heads over to a back alley bar. Paultin's snapping his fingers, trying to get service.

A remaining bad guy on a dinosaur. Diath gives him an intense eyebrow raise. A dinosaur bites Diath for quite a bit of damage. Not good! Allosaurus is still trying to kill Diath.

Paultin's being a rude customer. Here comes the chef.. It's Shmulk Shmogan! He's holding a plate of spaghetti. "Whatcha gonna do when Shmulkamania runs wild on you?"

A waitress spits in Paultin's glass. Evil? Might have a candidate for a bag.

Umpox  lands on the shoulder of Marsha, the waitress. He tries to pluck her eye out. He does! Then he drops the eye in Paultin's moonshine. Paultin drinks it anyway.

Strix is on a dinosaur. She's hit with three arrows. She's down, making death saves.

Diath chases off the enemies and drags Strix to safety.

Paultin unleashes a thunderwave that causes Shmogan to back off. Wait.. no... Shmogan is HULKING UP.

The restaurant's name is Pastamania.

Diath is going to jump off a table and bodybag this dude.

Paultin tries to hit the Shmulkster with moonshine, but rolls bad.

I have no idea what that was all about! Amusing. I love the idea of evil duplicates of the adventurers.

We talked all about this show on Waffle Talk: