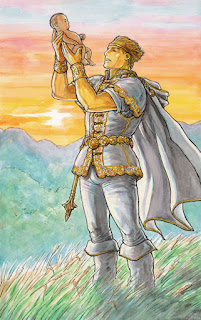 Episode 87: Necessary Evelyn
We start off with a song by Anna. Awesome! This group really goes the extra mile.


Last time, a balhannoth destroyed Evelyn's construct body. Her spirit was shunted into the soulmonger. Simon was killed, too.

Evelyn's spirit flew up and into the atropal and, through the power of her faith, she unleashed rays of sunshine into the heart of the creature and, apparently, destroyed it.

Back in the Shaowfell, Diath, Strix and Paultin sensed that the death curse was gone.

In the dark tunnel, smoke lingers from the fireball. They can hear the crashing of the waves from outside.

There's a bright amber light out in the Shadowfell that illuminates the beach.

Diath notes that this is twice now that Evelyn has saved them. The heroes take a short rest. Diath now has up to 45 HP.

Strix prays for the Morninglord. Holly wrote up a prayer and everything. Waffles makes sad noises.

There's a creature in these tunnels. It's... death.

Meanwhile... Evelyn is being tossed into the air. It is a bright, sunny morning. She begins to fall. Someone catches her. She looks into the eyes of her father. This is a memory.

Now, her dad is gone. Evelyn looks around and realizes that she's in her human form. Evelyn sees Zaress, the priestess she met in the Soulmonger. She's 40 years younger than she appeared to be in the soulmonger.

Zaress is watching a boy, who is on a swingset. The kid's name is Dortimer Ankathra. Is this an anagram or something?

Evelyn sees that they weren't annihilated. Lathander saved them?

Zaress says that is was Evelyn who saved thousands of souls. She's heard murmurings of sainthood in association with Evelyn's name..

Zaress tell Evelyn that since she did not die a natural death, there's a path back to the natural world.

Zaress and Evelyn talk some more. Zaress points out that the greatest gift is not a soul.. it's love.

"What is a soul without a soul mate?"

Zaress urges Evelyn not to rely entirely on Lathander. "Don't lean too far into your belief in him, as it is more important to believe in yourself."

Back in the Shadowfell, the group starts following "Death". He seems to be leading them in a square path.

Paultin casts Mislead, which allows him to become invisible.

Death says "I'm free" It starts to cast a spell. Paultin casts counterspell and shuts it down.

"Are you Acererak?", the group asks.

Death was a prisoner of the balhannoth. It explains that this Death is one of many Deaths.

The group wants him to bring back Evelyn. He says he can't do that.

Death has a couple of scrolls. It's his naughty and nice list.

Death tells them how to get out of the tunnels. They've got two choices: Go through the wall or walk around the whole path.

After some searching, Strix falls into a pit full of corpses. From the ceiling, a fresh corpse falls and lands with a splat.

Diath uses the horn of blasting to blow a hole through the wall.

I like the Lathander stuff. I don't get the Death stuff. Death couldn't just kill the balhannoth?

We talked about all this stuff on Waffle Talk: