Dungeons & Dragons - The Baatorians, the Original Denizens of Hell

If you're looking for one product to dig up info on Baatorians, there isn't one. I guess you could go with one of these two:
They have a lot of information on Zargon, but honestly Zargon isn't all that thrilling.

The Politics of Hell 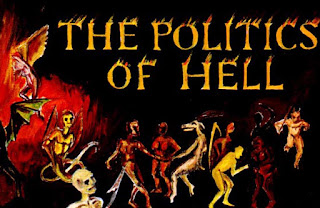 When I was looking into the origins of D&D Hell, I found a really, really old article on the topic in Dragon Magazine. This thing predates the classic Ed Greenwood Hell articles by a few years.

From what I can tell, a lot of this was ignored, but Ed Greenwood molded some of it into what we know as Hell in D&D today.

You know why they changed it? Because God is in it. This article is about God, Yahweh, Allah, you name it.

That means that Hell in Dungeons & Dragons was ruled by Satan! Here is what we learn:
The Great Triumph of Asmodeus: Asmodeus manufactured World War II. Seriously. How weird is this article?


Then we get stats for Satan:
In case you were wondering, Astaroth is in charge of devils operating in the United States.

There's more on the modern version of Asteroth in D&D here.

The Baatorians are the race of creatures that lived in Hell (also known as "Baator") before the devils existed. It wasn't until Asmodeus fell that the devils arrived.

In some editions, the devils sprang from his blood as he hit the rocks. In others, the devils were other angels who had rebelled alongside him against He Who Was.


Dungeons & Dragons has a lot of types of demonic "fiends." I should note that the creature referred to as demons are also called tanar'ri.

Some of these races are also a type of demon, but radically different from tanar'ri:
It's hard to keep them all straight and some of them feel very unnecessary.

Like devils, Baatorians "upgrade" from one type to the next over the course of many years. From what I can piece together, this is the chain of progression from least to greatest:
Is Baalphegor a Baatorian? I found an awful lot of people online talking about how Baalphegor, consort to Mephistopheles, is an ancient baatorian. I looked around and I couldn't find anything in any book that said this. Maybe I missed it.

Devils Become Nupperibos: Most high-ranking devils are reborn as baatorians when slain outside of Hell.

Disembodied Entities: A number of books say that the baatorians, especially the most powerful ones, become a free-floating consciousness at one with Baator. As they evolve and climb the ladder, they become something impossible for mortals to fully comprehend.

Yugoloths Might Have Created Baatorians: It is suggested in a few books that the first soul larvae were created by the yugoloths. Yugoloths are known to accept nupperibos as currency and as food.


Planes of Law: This mentions that there are tunnels and caves under Maladomini and Malbolge that devils refuse to go in, believing that baatorians lurk within.

In Cania, there are shapes frozen in the ice. Some people have melted the ice and have found frozen angels that were fighting spined creatures of an unknown origin. The 3e Manual of the Planes adds that there are abandoned cities of prosaic or alien design frozen in the ice, as well.


Tales From the Infinite Staircase: In the last chapter of this adventure anthology, the heroes learn that the chain devils have actually imprisoned a nupperibo that evolved into something else. It has tentacles growing out of its stomach and it speaks in a totally unknown language.

In Planes of Law, it says that a yugoloth actually gave the maturing nupperibo to the chain devils as a gift. Maturing to this stage takes "uncountable centuries." The mature nupperibo's traits:
The adventure theorizes that the yugoloths are hoping that the devils will panic and go into an internal war over the Baatorians.

Hellbound: In Maladomini, there's a city called Malatanni. Under it are mines where a baatorian lurks.

The adventure says that they are the essences of powers and belief from an unimaginably ancient age. "They still lie scattered, seeping through the substance of the layers and minds of the denizens, unknown and unknowable."

It Eats Light: This entity is a light absorbing void. It actually pulls the light from torch of the heroes toward it. The light turns into particles and is consumed.

It Turn You Invisible: Weirdly, when the light is consumed, the characters and all of their stuff become invisible. It does this while sleeping.

If the heroes wake it up, it consumes all energy including the life force of the heroes. Everyone within 50 feet must make a saving throw or lose a level each round.

It is Invincible: "Nothing short of a wish can affect the Baatorian in its current state."

3e Manual of the Planes: This book has all sorts of fun stuff. It fleshes out the area that, I think, the Life Stealer is from. There's a vast psychic buzzing that drives most people away from here.

Maggoth Thyg: Rumors describe ancient places built below the surface of Malbolge, Under the hellish rock and stone, the ancient baatorians might still roam.

A certain hard-to-find defile leads to a cavern whose walls glow with a brain-numbing, grayish light. Boulder falls often clog the defile, but somehow the cavern is reopened time and time again. Devils sent by the Lord of the Sixth to investigate have never returned.

Terrible cries sometimes issue forth from the cavern, echoing across Malbolge's slopes. Strangely, petitioners on this level cannot hear the cries. But devils can, and the sound is innately terrifying to them.


There is one baatorian that has been talked about in depth. It is Zargon, a creature that first made its debut in the classic adventure called The Lost City. I like these black and white Holloway depictions of him, but it's a really odd creature.

Zargon the Returner, the Devourer of the Depths: Zargon is 35 feet tall, has the head of a giant lizard with one black horn on it, one eye, 6 tentacle arms and 6 more as legs. Long ago, he ruled all of Baator. He was too powerful for Asmodeus to destroy. Zargon was banished to a prison on the world of Mystara. Asmodeus was able to eject him from Hell.

Eventually, Zargon was worshiped by the people of a lost underground city called Cynidicea. They appeased him with sacrifices and spent their days using a hallucinogenic Elixir of Fantasy. 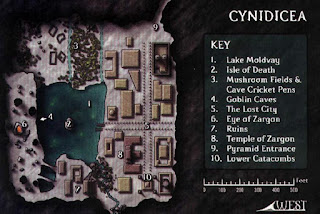 In a 3e issue of Dragon, it says that Aimeer of Glantri and Barnabus Bladecutter led an uprising and defeated Zargon.

Zargon eventually reappeared and went on an the warpath in what became known as the Time of Rage.

Grants Spells: Zargon is not a god, but he is able to grant spells to followers.

Herald of Slime: He is always surrounded by a thick pool of gray fluid.

Special Way to Kill Zargon: When slain, his corpse crumbles. and his horn remains. His body reforms in the depths of Lake Moldvay 1d4 days later. He retains all memories of his former life.

The only way to destroy him is to cast his horn into the fiery eye of Zargon within one day of his death. The eye of Zargon is a bubbling lava pit near Cynidicea where fire elementals and salamanders lurk. 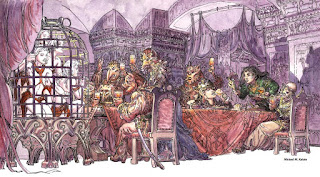 Dungeon Magazine 142: This issue actually has a sequel to the Lost City, called Masque of Dreams. It's got art by Michael Kaluta and everything.

In this scenario, a snooty noblewoman found some Cynidiceans and decided to show them off at a party. A cultist of Zargon drugs everyone at the event with the elixir of fantasy - except for our trusty adventurers!

Elder Evils: This book contains ten big, evil bad guys. The books goes into depth with each of them. One chapter is about Zargon. We learn that eons ago, Zargon had ruled the Nine Hells as the father of the ancient baatorians. His kingdom was a terrifying place with running slime and rampant evil.

Asmodeus vs. Zargon: When Asmodeus fell, he purged Hell of the baatorians, enslaving and destroying their lords. I wonder if that means that Baalphegor surrendered, if she is indeed a baatorian.

To get rid of Zargon, Asmodeus chucked the horn out of Hell and into the world of Mystara. Zargon reformed around the horn and was out of Hell for good.

Zargon's Powers: When Zargon is near, there are weather problems. Summer becomes winter, or it rains slime.


Corruptures: These things are 15 feet in diameter and would weigh about 6 tons! They are acid-spraying oozes that are at home on land and in water. They come into being wherever nature has been defiled. They hunger endlessly for flesh.

How to Kill a Corrupture: They have an amusing lifecycle. They eat. They grow. They get really big until they can't move under their own power. Then they starve to death.

There you have it. If I missed something, let me know! This was really tricky.
Posted by Sean at 7:16 AM

As always this is great stuff.

That "Politics of Hell" article was a favorite of mine when it first came out. Strange? Yeah, buckets of it, but a lot of fun.

Timothy Brannan: It seemed like a really good start. The author really pored a lot of lore and NPCs in there. I find it utterly hilarious that they statted out Satan. I would LOVE to use that in D&D somehow.