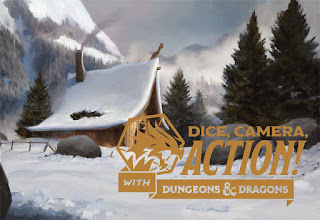 Episode 34: Thine Own Elf
On Reddit, they made a really nice index of the episodes right here.

This episode is a little less than an hour long, I guess there were technical issues or something. Emil is back for a bit this week. 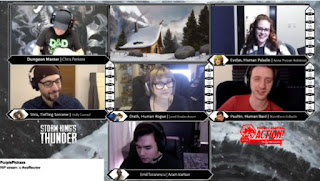 The werewolves are done for. Drizzt nods at Diath and heads toward the lodge. Diath notices his piercing lavender eyes.

Evelyn is enchanted by Drizzt’s rugged good looks and she sidles on over. Strix is feeding the owlbear and she recognizes Drizzt.

Drizzt is looking for a dwarf named Jasper. He got lost on patrol.

The group introduces Murderbot to Drizzt. Murderbot does the detachable thumb trick and everyone is sort of weirded out.

The group has a very logical idea. They want to give the doll with Strahd trapped in it to Drizzt. He says he can take it to the dwarven city of Gauntlgrym.

I did not see that coming. Very interesting! I thought that Chris might shoot that down, but he went with it. There are a ton of cool things that can come from this. It’s funny, the group might end up dipping into a bit of Out of the Abyss at some point.

Drizzt rips on the Acquisitions Inc group for taking his panther. 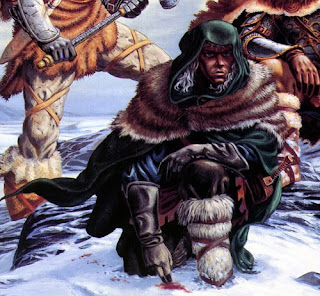 The heroes learn that the citadel they need to get to is 20 days away. Food will be scarce. Paultin can summon the waffle hut for warmth. This adventure is full of long journeys. It’s nice to see the group in a new environment. It feels very fresh.

Drizzt say that activity on the glaciers has driven a white dragon south. That situation is fully described on Storm King's Thunder page 155.

Drizzt is leaving and the heroes prepare to begin the journey to the citadel. That’s where we stop.

Short but good! Nothing essential, but very enjoyable. You can feel this show becoming a thing now. You should definitely jump on board now if you haven’t checked it out.

I get the feeling the group will be going to one of my favorite places in Storm King and I have no idea how the waffle crew will handle it. I am looking forward to it.
Posted by Sean at 7:10 PM

S2 is getting good now they've wrapped up the crossing over from S1. Zalto... they're coming for you!

WotC uploaded the first part of this episode to YouTube, this 40-something minute segment being the second part. It actually answers a lot of questions, because I was totally lost as to what happened, haha.