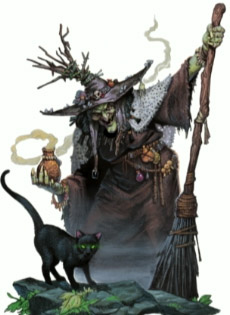 I think the title of this episode is: Twitching Hour
I am quite excited about this episode. I think the group is going to Van Richten's Tower, which is one of my favorite side locations in Curse of Strahd.

This session is being played in front of a live crowd at TwitchCon 2016. The players are actually dressed up as their characters. Holly is amazing at this kind of stuff and she looks really, really good. Check it out: 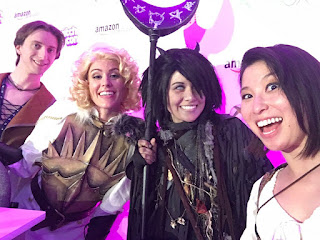 No Nate: Nate is not here. There were a lot of bummed Nate fans in the live chat. The good news is that my favorite guest star, Erika Ishii, is filling in for him.

New Art: They had a lot of graphics ready for this episode, which is awesome. We get images of all sorts of stuff that I can't find online, like a clean image of the witches and Van Richten's door puzzle. They were really on the ball as far as production goes.

Last Time: Diath made a dark pact to bring Strix back from the dead. The group escaped the amber temple and are on their way to Van Richten's tower.

Chris reminds Strix she was brought back to life so she only has one hit point. Evelyn heals her for a cool 20 units of well being. The heroes survived the battle with the roc, but the wagon fell into the chasm.

They cross the bridge. There's those two vrock statues that gave them so much trouble last time. They come to life. Van Richten knows their truenames! They back off. He casts dispel magic to remove the sheet of green flame. The crowd actually yells "green flame" on multiple occasions.

Dee is waiting past the bridge with the horses. Evelyn is happy to see her. They embrace and Dee loves every second of it.

They ride to Van Richten's tower. Outside of it is a wagon. The two wolf hunter brother NPCs are here, Szoldar and Yevgeni. They're hiding from the eyes and ears of Strahd. 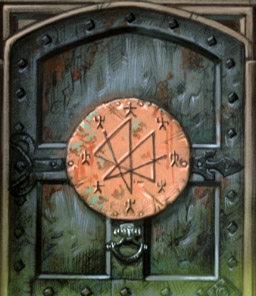 To open the door of the tower, Van Richten does a dance (this door is insane - see page 169 of Curse of Strahd). Anna is so smart. She asks to memorize his dance. She rolls well and succeeds in doing so.

Dee insists that this tower is actually called "Dee's Tower." Van Richten goes along with it when she glares at him. The tower was made by a wizard named Khazan, there's an anti-magic aura here. I was kind of wondering if either Kazan or Exethanter were originally going to be Azalin the lich and then they changed it for some reason...? Azalin was a big NPC linked to Strahd in previous editions, his absence is sort of weird.

Van Richten says he had a dream about the group. The group is a little curious. Van Richtean doesn't want to elaborate.

The group notices that Paultin is intensely staring at Van Richten. I was kind of wondering if maybe Paultin is a Dukkar, a person fated to oppose the vistani. I wrote about dukkars yesterday.

Dee goes to get something to eat from a chest. There's a severed head in the chest! The group is alarmed. Van Richten says that it is the severed head of a vistani.

Evelyn and Dee sleep in the same bed. Dee is thrilled. It isn't long before their snoring is coordinated.

Diath decides to subtly keep watch while everyone sleeps. Smart! 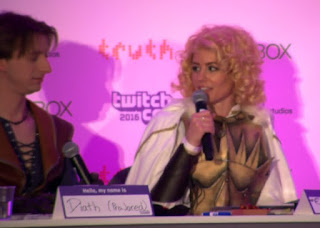 There's a shadow on the wall creeping toward Van Richten. It's Paultin's shadow! Awesome. Diath yells out and throws a dagger. He rolls bad and hits Strix in the head with the hilt.

Jared is really witty. That seems to be very important for these live shows.

Strahd can manipulate the shadows. Van Richten snatches the Strahd doll. Van Richten says it is an effigy that can trap Strahd. The ritual needs to be completed. Van Richten says that this thing could be the key to defeating Strahd..! He says they need some ingredients, including the hairpin of a hag, which Van Richten got off of a dead hag at Old Bonegrinder.

There's cackling outside. Is it Baba Lysaga? No. It's flying. It's a black-clad figure riding a broom. More than one. Witches! One is a man-witch! There's wolves, too.

The group wants to lean out of the window to circumvent the anti-magic aura and make ranged attacks. A hag chucks a vial in the window, which Evelyn swats with Lightfall. It shatters and she gets ichor all over her.

Strix rolls to see if she knows what it is, she rolls a 20! She knows that it is demon ichor and that it will form into a demon. I think this is the same stuff that's on page 126 in Curse of Strahd. 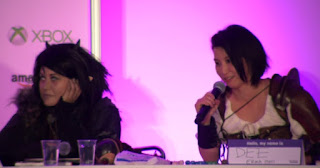 The group has some holy water... nice. Another flask of goo is chucked through the window. The audience is coming to life for this combat. This session starts out quiet and by the end the crowd is living it up. Van Richten casts magic weapon on Dee's shield. Through the anti-magic? I think Chris forgot. No big deal, that kind of thing is going to happen.

They can hear the wolf hunters in combat. What's Paultin doing for this? Sleeping? Strix can't cast spells in the tower so she takes a dead rat and chucks it at the ooze. Holly actually has a rat prop in her pocket and throws it into the crowd. The ooze climbs into the dead rat and brings it to life.

Diath kills the rat. The crowd applauds. The ooze spews out of every rat orifice. Evelyn stabs it "right in the middle of the rat puddle."

Evelyn wants to go outside and help the wolf hunters. They killed over a dozen wolves. She kills two.

A witch hits Evelyn with a ray of sickness. She takes 15 poison damage. She makes her save, but she's unconscious. The rest of the group comes outside

Strix drops the man-witch with a magic missile. He falls from the sky and lands right on the top of the wagon. On her next turn, she kills another witch with the same spell.

Diath tries to pick up the broom of the man-witch. It attacks him and hits him twice. Diath uses UNCANNY DODGE to survive a broom assault.

The group realizes that Van Richten is up there alone with Paultin. They're up there fighting. 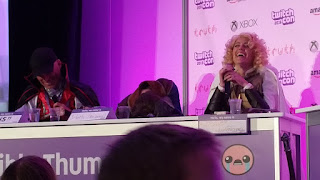 Diath hits the broom.. but it lives! It hits him. Then the other broom comes at Diath doing 7 points. It dropped him! Crowd is dying of laughter. Diath was defeated by a broom. His head is on the table. Anna: "Looks like you really got swept away there, Diath." Crowd groans.

Strix continues her assault as she kills 15 wolves with a fireball. One broom is destroyed. The other is on fire and comes at Strix. It hits her once for 4. Strix finishes it off.

Dee hears Paultin and Van Richten fighting in the tower! Dee is going up the elevator. Wolf hunters kill the fire broom.

Outside, Strix points out that she killed almost everything. Evelyn asks her if she wants a hug. She says no, but Dee and Evelyn rush her and make a Strix sandwich. That's where we stop. 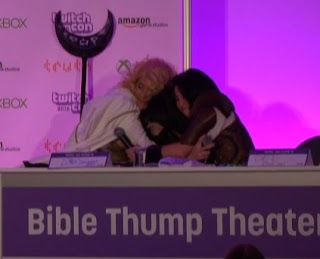 Really great show! When it comes to these live shows, it seems like the most important thing is to have players who are funny and quick on their feet. All of these players definitely fit the bill. Jared in particular has a really sharp wit. He pretty much won the crowd over by the halfway point and he was on fire as the show went on.

Growth: It is really fun to watch them build this show step by step. Each episode, it gets a little bigger and better. These players draw a really young crowd, many of whom know nothing about D&D going in. They see this and they get interested in the game.

Keep Dee: Erika is great and I think she should be on every week, or, at the very least she should fill in on the weeks that Nate can't make it. She brings a lot of energy to the proceedings and she's a real team player.

Good: I thought we'd see something big on this show, since it is a special live episode. I assumed there would be a Strahd appearance. I'm not disappointed at all. The show was great and you should definitely check it out if you can. I'll get some timestamps up if/when it is on youtube.
Posted by Sean at 8:47 PM

Back at episode 12 I mentioned that if this were a TV show that would have been the finale of "season 1". Now, because I love organizing stuff, I feel like this ritual Van Richten is planning will be the climax of what would be "season 2".

Really, if you plotted it that way, there's a clear overarching plotline through these last 12 episodes. Evelyn becomes a werewolf, Rahadin/Kasimir shows up to bring them to the Amber Temple, hijinks ensue, etc. Episode 18 (when they reach the temple) even works as a sort of midseason finale, as the big wham episode where everything goes wrong.

Now if this ritual can defeat Strahd, and it's supposed to be the climax... something pretty much has to go wrong, right? And I know what I would do if I were running things. I'd have someone show up to disrupt it. And to make it as climactic, I'd use the guy who's more or less been the most prominent villain this "season". In other words, Rahadin himself.

Anonymous: Wow, great theory! I definitely see what you are saying. This ritual thing is so out of left field. Van Richten said it can defeat Strahd, but Strahd is able to talk through the doll so it seems like Van Richten might not know the whole story.

I am looking forward to when the group meets the real Kasimir/Ass Smear. I wonder if they'll get drawn in to the whole Patrina thing.

Where would they do this ritual? Right at the tower?

I guess we'll see. Thanks!

aha! i knew Paultin's shadow had some importance (ever since episode 3 or 4 or whenever it was first shown?)! would be super interesting if Paultin, a vistani, was also a Dukkar. how does that work?
poor Diath... I hope he is able to land an awesome dagger throw some day...

Anonymous: I don't know much about the whole dukkar thing, just that they are these fabled enemies of the vistani that pop up once in a while. Diath is awesome, I have become a big fan! The whole group rolls pretty poorly.