Tonight we plowed through another chapter of The Great Modron March, which continues to be thoroughly enjoyable. This one actually features a trip to the legendary Forgotten Realms dungeon known as Undermountain. It has some really old school, deadly traps.

I have continued to plan out this campaign, and right now this is the plan once we finish this book we're going to do:
The Party

Last time: Our heroes had gone to Limbo. Bidam the dragonborn had his scales changed from black to platinum. Theran the elf was transformed so he appeared to be a drow, with black skin and white hair.

Downtime in Sigil and Zerthadlun

We played through three months of downtime.

Crafting: Theran had been awarded magic item formulas by the githzerai. He could make javelins of lightning and tan bags of tricks. He got to work making javelins to sell in the Curiosity Shoppe owned by Vrischika the alu-fiend. It took 20 days per javelin.

Selling Magic Items: We tried out these rules. Basically, you roll an INT check to find a buyer, then you roll on a chart to see how much they offer. Being that Theran paid so much money to create the item, he needed a roll of 90+ to find a buyer willing to pay enough for him to make a profit. This actually worked out fine for him. He sold two javelins.

Bidam had an interesting idea. He learned that the Lady had a hole where her heart was, and that it was the source of all pain and anguish in the multiverse (material I gleaned from Troy Denning's novel "Pages of Pain"). Bidam thought maybe he could either find the lady of pain's heart, or find someone to create one for her.

This could somehow be tied to the heart of aoskar, an actual artifact. Maybe it could be used as a prototype.

Vrischika used detect thoughts to read the minds of the heroes , and was utterly horrified to find out that Bidam had it in for the Lady of Pain. The alu-fiend strongly urged Bidam to drop the whole thing. 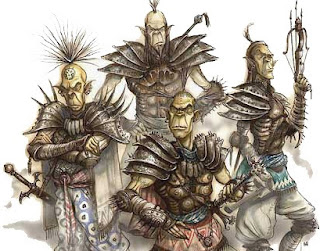 Training in Zerthadlun: The heroes also spent 4 hours a day in a monastery in Zerthadlun, training under a githzerai monk named Belthomis. We did a skill challenge training montage of the heroes breaking boards, meditating, striking a foe while blindfolded, that kind of thing. At the end, they passed their test and gained a permanent bonus to initiative.

Bidam's Platinum: People of Sigil and elsewhere were in awe of Bidam's platinum scales. Some thought he was a child of Bahamut, god of good dragons.

Theran's Dark Elf Skin: Theran, conversely, ran into some problems. The adventurers went to The Smoldering Corpse (the tavern from Planescape Torment with the floating guy who is on fire in it) with some NPC friends. A drow priestess was there, having just bought slaves.

She spotted Theran. Drow males are subservient in Drow society. She called him over to her table and began to question him about what drow house he was with. It took mere seconds for a bar fight to break out, with her trying to use her fang whip to punish him for his insolence.

A bunch of Mercykillers jumped in, smashing people with chairs. Her two recently-bought slaves tried to make a run for it. In the end, the drow fled through a portal with her slaves from whence she came.

With all that downtime stuff out of the way, we got into the adventure. It turns out that the modrons had used some new, unknown portal to exit the plane of Carceri. The location of a new portal was valuable information in Sigil, especially when it's in the prison plane. Vrischika told the heroes about it, and they decided to go check it out.

Aach the Traitor: The adventurers appeared in Carceri and met a red-haired rogue named Aach. The heroes took a quick liking to her, as I did a really bad irish accent for her voice which was described as "half-Canadian".

The deal with Aach is that she is going to betray the heroes in this adventure, leaving them to die so she could sell the information and keep all the money to herself.

Aach has a hot air balloon made out of skin..! The heroes rode in it to another "orb" of carceri that the modrons had flown to. The modron tracks led to a pool of quicksand, which was indeed a portal. 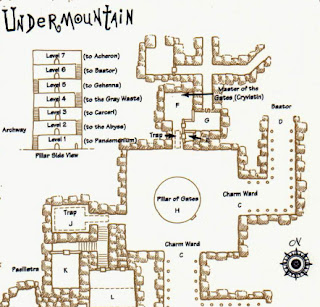 The quicksand portal brought our heroes from Carceri to the Forgotten Realms! Undermountain is a vast dungeon underneath the city of Waterdeep, built by the insane mage Halaster Blackcloak.

Harpies: They came upon a room with a pair of harpies in it. The harpies sang and entranced Bidam. The harpies did a bit of damage before being slain.

The Drow Priestess: In the next room was a drow sitting on a throne, guarded by giant spiders. She said her name was Paellistra. The heroes chatted with her a bit and were honest in explaining what had happened.

Paellistra questioned Theran about what drow house he was with, and this time Theran was more diplomatic in his response.

Paellistra warned them that this was "her" section of Undermountain, and that is was quite deadly.

The Pillar: There's a huge cavern (Area H - "The Pillar of Gates" on the map). In it is a tall pillar/tower, which has seven sections. Kind of like a vertical stack of cans of tuna. Some of the sections rotate. Muddy modron tracks lead right into the door at the base of the tower.

Aach figures out the tower's deal right away: Each section of the tower has a portal to a plane, and the portals are powered by the rotation of the sections. She notices that the top two sections are no longer rotating, and she realizes that the magic of the tower is waning and it will soon stop working completely.

The Guardian: There's a guardian of the tower - Cryvistin. In the book, he's a vampire. That's too powerful for my 4th level heroes, so I made him a wizard who was cursed by Halaster to stay and protect the place.

Cryvistin gave the heroes some BS story and cast fly on himself. He asked them to follow him and pass a "test" of his. He was actually leading them into a really nasty trap.

The Trap: This is brutal. It goes like this:
I knew this was a really messed up trap, and I wouldn't have used it on most groups. But these players are laid back and they trust me.

They climbed on each other's shoulders and used a ten foot pole to open the lid. Then Aach climbed up and dropped a rope for the other two to climb out, while the ball of energy zapped poor Bidam.

Cryvistin's Really Red Room: Angry, the heroes had seen Cryvistin go through a door further down the hall. They went in. The front area is full of black curtains that obscure your view, and once you move them, you see that everything in Cryvistin's room is the same shade of red. This effect is so disorienting that PCs get a -1 to all die rolls while in the room. I found this to be a very amusing idea.

Cryvistin decimated the party with a cone of cold spell, dropping Theran. Aach and Bidam rushed him and cut him down. Theran was healed with a potion, but the party was hurt badly.

Cryvistin had a nice pile of treasure, including a red spellbook loaded with spells written in light red ink on dark red pages. 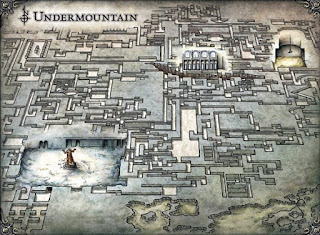 The Pillar of Gates: The adventurers realized they needed to get into that pillar, as they were hurting badly. Getting up from one rotating section to the next was tricky. The hole in one section's ceiling had to line up with the hole in the floor of the next section in order for the PCs to pass through.

So basically what happened is that Aach got the PCs up to the 4th section, then heard a rumbling noise indicating that the section was about to stop rotating, and she jumped back down into the 3rd section, shouting "See you, suckers!".

The heroes were baffled. They had no idea what just happened. There was a good chance they would have been stuck in there forever, but they realized that the section above them was still rotating. They only had one choice to escape - go up there and go through the portal in there.

Gehenna: They appeared in a plane that reeked of sulfur. Nearby was a river with screaming faces in it - The River Styx. They called forth the demon pirate ship Beham's Cyst, and sailed around, utterly baffled how to get home.

They eventually realized they had a mimir that could tell them where they were, and a planar compass that could direct them to the nearest portal.

They headed for the portal, determined to get back to Sigil before Aach could get there. They wanted to ambush Aach in the city and get revenge....

Continue on and read how the heroes tried to get their revenge on Aach.
Posted by Sean at 12:22 PM