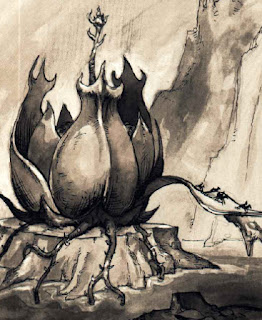 We are just about done with this adventure! Tonight we tried some watermelon twizzlers, which tasted like a chemical bath. 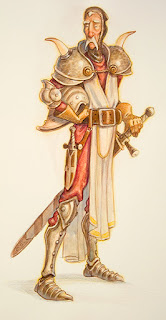 The heroes were sailing on the River Styx in Gehennea, using their planar compass to find a portal back to Sigil. Vaimish Crasad, the paladin lord, spotted them. Crasad and his knights were hunting the evil knights known as the Tacharim, who had a base in Gehenna.

Crasad directed the heroes to the portal and gave them the portal key - heartwine, a wine made with razorvine.

I had thought this actual adventure was very short, so I cooked up a lot of downtime stuff in Sigil. But it turns out I made too much and we didn't quite finish the adventure. 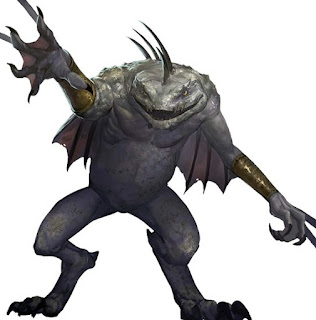 Last time, the adventurers had been betrayed by the red-haired rogue. She'd left them to die in Undermountain. So the heroes set up a plot to find her and take her down. They staked out the locations of Sigil's three main information brokers - Rule-of-Three, Shemeshka and Estavan of the Planar Trade Consortium. They figured she'd try to sell the portal information to one of them - and they were right.

They confronted Aach in Shemeshka's gambling hall Fortune's Wheel. They chased her, tackled her in the street, and brought her to their home. They were able to bluff passersby to avoid trouble.

Then, once she was in their home and tied up.. they fed her to Theran's grey slaad!

The Heart of the Lady of Pain 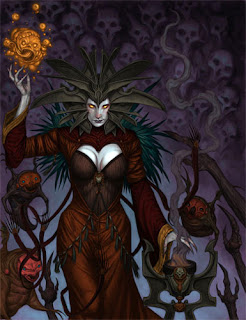 During the extensive planning, the heroes met with Vrischika, the alu-fiend who ran the Curiosity Shoppe. She once again read Bidam's mind with detect thoughts and saw that Bidam now didn't want to kill the Lady of Pain, but she wanted to find the Lady of Pain's heart.

Things Bidam will need (this is a long term project):
Faction Meetings

Bidam visited the Civic Festhall and met the Factol of the Sensates - Erin Darkflame Montgomery. She's a major NPC in the Planescape boxed set, and I figured she'd have heard of Bidam's encounter with the slaad lord Renbuu and would want to hear about it.

After the meeting, Bidam tried to find a wizard to help create the Heart of the Lady of Pain, but got sidetracked. He met a woman, an NPC I took out of Planescape: Torment. Her name was Sarhava Vjhul. In Torment, Sarhava is really drunk and insults the heroes. She wears "translucent silk clothing" and exotic jewelry.

Bidam seduced this lady. I thought it might be cool for the heroes to have a wealthy friend, and I had cooked up a tragic backstory for her, but Bidam lives by the philosophy of "Hit it and Quit it" so poor Sarhava might never get the spotlight again.

Meanwhile, Theran visited the home of the Free League - the Grand Bazaar. I wanted to show him what his faction was like and flesh out some NPCs. Stewart Seven Fingers sells spell components and is researching a cure for the burning wizard in the smoldering corpse bar. Rodina the rilmani makes monogrammed handkerchiefs. Theran bought some.

Browsing the Bazaar was Herion Lifegiver, the wizard from the very first session. He was shopping. I wanted him here so he could casually mention an evil sword he once made called Craggis. Craggis is involved in the last chapter of this adventure.

I also wanted Herion to be here in case the heroes wanted to pick his brain in both the curing of the burning wizard or to help create the Heart of the Lady of Pain. Theran did ask Herion about a possible cure for the burning wizard. Herion mentioned a ritual involving a decanter of endless water.

Theran wracked his brain, and remembered that a few sessions back a dabus had used a decanter to put out the fire in their home. The dabus also had a magic sword (Ffazablur, a sword that will play into the Chris Perkins adventure "Nemesis").

All of that stuff took up a lot of time. It was pretty late when I dropped the hook on them. It turns out Crasad and his knights had failed in their assault on the Tacharim. Greir, sister of the paladin lord, arrives at the heroes' home with modron parts fused to her. She begs the heroes to go to Gehenna to rescue her brother, and to burn the Tacharim stronghold to the ground.

She died hours later. The adventurers brought her to a temple, in the hopes she could be raised. Then they set out for Gehenna. Theran brought his grey slaad with him.

If you read the 5e monster manual, you'll see that slaads and modrons are now mortal enemies. That makes the slaad a very interesting NPC to have in this adventure, so I stepped up my efforts to keep the slaad in the spotlight. A lot of times, we all forget about animal companions and NPC sidekicks as an adventure progresses. 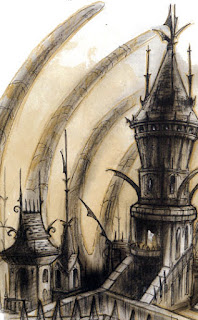 The adventurers went to the gate town of Torch, which has two gates to the plane of Gehenna:
The heroes decided to search the blood marshes for the portal. Both of them fell ill almost right away. They began to cough uncontrollably and suffer from the shakes. This disease gave them, among other things, a -2 to hit!

They searched for 6 hours and finally found the portal. They passed through, but realized that they were too sick to take on the Tacharim. They sought out the river Styx, summoned their demon pirate ship, and rested.

They ended up resting for four days due to horrible dice rolls. Skeleton pirate captain tended to them as they lay in bed. He sang them dirty pirate songs and put washcloths on their heads. The players found all of this to be hilarious and wondered if the Tacharim had finished their evil plan - whatever it was - while the heroes were out sick. 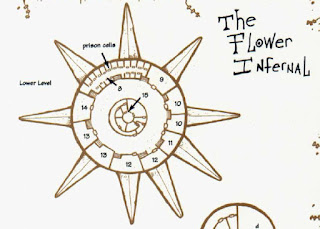 Healed and rested, the heroes made their way to the Tacharim base. It was called the Flower Infernal. The building was a giant rotating silver flower surrounded by a moat. The bad guys could lower petals to create bridges that crossed the moat.

In the adventure, it is said that the best thing for the heroes to do is to take out a couple of Tacharim, put on their gear, and then creep through the base in disguise.

But our heroes had a slaad servant (Theran controlled him with a slaad control gem) who could teleport and turn intangible. Theran ordered his slaad to go thorough the base and find the prisoners, if there were any. He ordered it not to kill anything.

Off it went, teleporting over the moat and passing right through an exterior wall.

The heroes didn't know this, but there's a number of rooms with modrons in them in the Flower. Also, one bad guy is inhabiting the body of a modron! So the slaad began to explore, spotted modrons, and was filled with the urge to kill. But he'd been directly ordered not to kill, so the chaotic creature roared in rage.

This alerted the Tacharim to his presence. The slaad fled the base and ten Tacharim chased him out into Gehenna.

The adventurers decided to cross the petal-drawbridge while it was down. 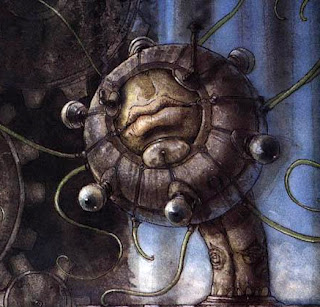 Most of this adventure as published is just room descriptions of this building. Many of the rooms are pretty dull. I decided to run this in a cut-to-the-chase kind of way. I had all of the doors have labels, so the adventurers could see what the rooms were before they went in.

There's really three main encounters in here:
So the heroes entered the base and ran into the modron. He's one of the really freaky modron types. He's got tentacles and eyestalks.

Way back in session 5, the heroes had battled a wizard named Valran. Theran put his finger in the wizard's ear and cast firebolt, killing him.

The Tacharim found Valran's body and paid someone to cast a resurrection spell to bring him back to life. Valran continued his research, found a way to inhabit a modron body, and now is slowly being overcome by the modrons logical and lawful nature.

Last time Valran saw Theran, he was an elf. Now Theran is a dark elf. So at first, the modron/Valran assumed he was a member of the Tacharim. But once Theran spoke, Valran recognized his voice, went into a rage and attacked. He snatched the wizard up with his tentacles and threw him into walls over and over.

The heroes had a hard time hitting Valran's high AC. Eventually they bloodied him, causing oil/blood to spray out. They figured it might be flammable, and hit him with a burning hands spell. The modron, on fire, staggered toward a petal. It lowered.

Bidam immediately realized the petals were controlled by heat.

Theran was down to a single hit point. They decided to flee and rest. They'd have to come back later to try to rescue the paladin lord and his knights.

Click here for more of the assault on the Tacharim.
Posted by Sean at 5:21 PM