The MOST AWESOME Spelljammer Monsters (All Supplements)

I'll be running the Dungeon Crawl Classics adventure Well of the Worm tonight. There's going to be shenanigans before that, though. When we stopped last time, two of our heroes had snatched a magic pearl and are in a deep pool of water with 25 snakes that want to kill them. Plus, the tower they are in is going to completely fill with water in 13 rounds. I honestly have no idea how this is going to go..

Then, they do not know that this pearl has a secret power that attracts all creatures of 5th level or higher within a 5 mile radius. They just kind of wander in, innately drawn to the pearl's power.

On the D&D Next front, I used these damage tables in my Friday game. They're too high! A 3rd level monster doing 11 points of damage does not work. Stick with "easy".

The art. Some of it is good. Baxa was on fire at this time. I wish he could have done all of the black and white stuff for Spelljammer but alas, he did not. What this means is that you'll be flipping through a Spelljammer supplement, see a stupid picture and keep going. But if you stop and read, the monster is cool. Although that really goofy thing is staring you in the face, and you know if you show your players the picture that the encounter might get farted on.

Let's start with the monsters that are good, but didn't quite make the top five. I put the name of the product that they are from in parenthesis. Hey everybody... prepare for takeoff, right? Because of Spelljamming? ...OK, sorry, here we go:

Arcane (Main Boxed Set): They are 12 foot tall blue-skinned merchants. They sell helms, which are the magical thrones that fly ships. They have this cool thing where harming an arcane is known to all other arcane automatically.

These creatures are one of the main monsters in the setting. They are mysterious. They have a base in a cool little universe called Refuge created by Ed Greenwood. But a lot of the art depicting them is really, well, goofy. They always have a "can you believe this guy?" kind of look on their face.

Beholder Mage (Wildspace): Because they are blind in their central eye (which is an anti-magic ray), this means they can learn spells and store them in their "spell-stalks". They can only choose from one school of magic. Pretty scary.

Elmarin (Boxed Set): These are sentient fire beings that live near suns. I like these for one reason: They have ioun stones inside of them. Gnomes hunt them. There's just a million things you can do with that. As soon as the PCs hear about this, the ship stops, turns, and heads for the nearest Elmarin.

Giff (Boxed Set): These guys are kind of the make-or-break for the whole setting. If you think Hippo-men dressed like Napoleon using gunpowder guns is too goofy for your campaign, well, I can't blame you. I guess Spelljammer's not your thing. Me, I like it. And I love doing a stuffy British voice for my Giff NPCs.

Horg (Greyspace): These guys are kind of cool looking. They phase like phase spiders and have a mouth on their head or something. Really though, I listed them here because of one simple quote from their entry: "They have no evident or overt genitalia". So.. how come only this monster gets a genital mention? Which monsters have overt genitalia, hmmm?

Kasharin (Legend of Spelljammer): This setting really takes the ball and runs with Beholders. Kasharin are beholders afflicted with a disease known as The Blinding Rot. Their skin is blackened, their stalks have wilted, and their central eye now emits a powerful charm ray. They are not living and not undead. And they only hate living beholders.

Kindori (Boxed Set): These creatures are space whales with a bunch of eyes, one of which fires a beam of blinding light. Sometimes, barbarian tribes ride them through space. There you go! Spelljammer!

Mithril Dragon (Practical Planetology): These guys are cool, but too faerie dragon-y to hit the big time. They are graceful, they have tiny eyes and no interest in treasure. Their breath weapon is a beam of blinding silver light 100 feet long that does heat and radiation damage, and blinds for d6 hours. They have a "well-developed sense of humor".

During this time period at TSR, there was an awful lot of jokey product. Way too much, in my opinion. If I were from England, I might say that it felt like some of the TSR authors were "taking the piss".

Scro (Boxed Set):  These guys are space orcs (scro is "orcs", backwards). They have pig noses. They are kind of smart. They like to taunt their foes in a literate and drawn out manner before slaughtering them. They keep necklaces of teeth and wear spiky armor. Pretty cool. Some good Baxa art on them.

Set a course for rock candy mountain! It's time for the TOP FIVE: 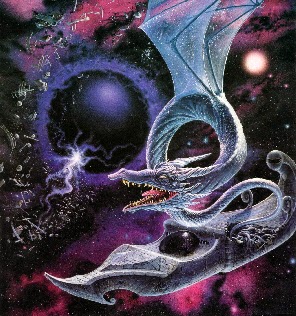 Radiant Dragon (Boxed Set): They are giant space dragons of any alignment. Their scales are like shards of mica and gypsum (I don't know what those are and I'm not looking them up).

They like to grab ships with their tails and crush them for 1-6 hull points of damage. Yes, these are dragons designed to fight ships.

Your players will flip out when a dragon flies up to their space ship and attacks it. 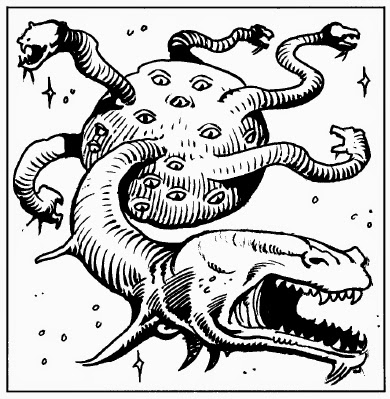 Beholder Eater aka Thagar (Lost Ships): They eat beholders! They instinctively devour beholder eyestalks. Also, on a personal note, they are "bisexual!" I don't... what?

When not eating beholders, they chow down on other iconic D&D monsters such as radiant dragons and umber hulks. WHAT


Arch Lich (Lost Ships): An Arch Lich is a GOOD LICH. Their eyesockets are full of twinkling light and they are immune to turning. They have an aura of power - creatures of less than 5 hit dice flee upon seeing them. Whenever somebody speaks their name, anywhere, the arch lich hears.

The arch lich has a paralyzing touch. They can animate dead by touch. They know 9 spells that they get back "every 144 turns". Really? I read that, and I know that in 2nd edition, a turn equals ten minutes. So I'm starting to math it in my head and I'm thinking, 'this better not be the equivalent of 24 hours'. 1440 minutes. 24 hours. COME ON! Waste of time!

I like the arch lich because it is a very cool npc ally for the heroes.

Tinkerer "Giant Bubble"(Lost Ships): I know this is a controversial pick. The drawing is really, really goofy. And the concept is pretty goofy: They are 4 feet diameter balls with arms. They acquire/improve/modify all equipment. They love magic items and can modify humans with weapons/magic.. that's kind of cool, right? In the 2e drow of the underdark book there's some info on giving a drow an adamantite arm. That's pretty awesome. With a Tinkerer, the PCs can do that too.

As long as it doesn't get too "cyberware"y and still maintains a fantasy feel, it's pretty awesome. The players are free to imagine whatever cool modification works for their character, like sticking a magic gem in their eyesocket, placing a magic sword where their forearm once was, that kind of thing. Monte Cook's Chaositech supplement in 3e did this kind of thing and it was very well-received by my group.

The Tinkerers are horrible in a fight. If they take more than 10 damage in a single shot, they explode violently. They swallow stuff to store it. There's a mention of them liking to "hitch rides" on spelljammers. They're a little goofy, but I know I can make them work and I can get a lot out of them.

And now we have by far the BEST monster made for Spelljammer. Not only do they have an entry in the main boxed set, but there are also two Dragon Magazine articles expanding on them.

Neogi: These creatures are a combination of spiders and eels. They are a race of slavers. Each neogi has a personal umber hulk slave that it rates over all others. They dye their bodies with pigments and look like"exploded rainbows". I like to imagine them painted up like M Butterfly.

I want to pause right here and again talk about the art. Jim Holloway nailed them in his depiction to the left. Almost every other drawing of the neogi fails, in my opinion. Even the miniature isn't right. Have you ever seen that thing? It's painted so dark that you can't make anything out. And nobody seems to be able to get the size right. They're supposed to be 3 feet tall. That's bigger than a dog, right?

Anyway, sometimes the neogi all swarm and bite one other neogi, inject it with poison which causes it to swell up and become a 20 foot tall Great Old Master. Its' intelligence fades and it lives only to eat. After 2 months, it explodes, giving birth to a horde of about 30 young neogi who eat their way out and kill each other. 3 to 6 of them survive. That is how neogi are born!

- Any slave that refuses or is incapable of working is eaten
- Kender, halflings and gnomes are not valued slaves. They are tortured and eaten. All those useless hoopaks.
- Neogi prefer to be carried by their umber hulks (I picture them riding on their shoulder).
- Their language is called "K'azz'jak'n" and sounds like snakes hissing.
- Their eyes are sensitive to light. They are filthy creatures.
- Their methods of torture are truly hideous.
- They are sexless - no males or females
- They have gods, but they never pray to them. The gods are viewed as servants.
- Everyone hates them except mindflayers
- They don't understand gender or love. They consider human women a separate race from human men.

There you go. The neogi! Probably gets a bit of a bum rap due to all the lousy art floating around. But in the end, the content trumps the visuals by far. What better recurring villain than a hideous little slaver hiding behind his giant slave monsters?
Posted by Sean at 2:21 AM