Yesterday we talked about Ed Greenwood and why he is one of the Greatest Dungeon Masters of All Time. He sold his Forgotten Realms campaign to TSR in 1986 and it has been around ever since. The Realms is the core setting of the new edition of D&D.

I found a fascinating and massive archive containing endless words from Ed about his campaign. I've been digging through it. I have unearthed a number of gems, my friends. I'm talking drugs, swears, and even some dirty stuff! Well, a lot of dirty stuff, honestly. So yeah, click away now if that's not your bag.

Let's start with... THE WEREPEGASUS.

- They are female humans or half-elves that can turn into a pegasus that is white or blue.
- They can't infect others like a werewolf
- Their shape change transformation takes 2d4 minutes.. "..and the change is often accompanied by releases of body gas (yes, farting) due to instantaneous digestion of whatever either the human or the pegasi form might have in its stomach."

I talked a bit about the spelljamming race known as The Arcane the other day. They are 12 foot tall blue guys who sell spelljamming stuff. They are powerful and have mysterious motives. Well guess what? Ed spills the beans while talking about the idea of game universes being contained in vast crystal spheres which could be traveled to by magic ships. Mystery solved:

"The idea of the spheres wasn't mine; it came from TSR, not just as a way to link their game settings, but also as a way to turn the focus of D&D at the time away from demons and devils (who would reappear as "baatezu" and "tanar'ri") and the planes (that was the secret of the Arcane: to distract races into spelljamming whilst they tried to dominate the planes)."

They are trying to dominate other planes? There is an arcane in Planescape's city of Sigil. Estevan, I think his name is. They don't seem to have had much success. I'll have to mull this one over..

You may be aware of the monster known as The Tarrasque. It is a giant monster that periodically goes on rampages and is almost impossible to destroy. Well, Ed says that there is, in fact, more than one Tarrasque:

"I stealthily included some Realmslore on this beast in my most recent Spin A Yarn tale, and the converse there betrays the fact that I'm SURE there's more than one of these beasts in the Realms. Many of the rumors you allude to are linked to the activities or deaths of various tarrasques. I'm being deliberately vague here because I don't want to mess up any plans Dungeon Masters might be unfolding in their own Realms campaigns that view the tarrasque differently, but yes, I'd say you can deploy one whenever you want to (and as soon as it's slain, establish another one somewhere else in Faerun)."

He made up some drugs! I like to include drugs in my games. It's fun. I usually use the list on the Dungeon Dozen site. Here's Ed's drugs:

- Makes affected area VERY sensitive for up to twenty minutes
- Used in festhalls (Ed explains that "festhall" is the family-friendly TSR term for "brothel") to increase sensations of pleasure - and by torturers to increase feelings of pain.
- Can cause a coma or days of numbness in affected area.

- For most, this does nothing, or causes a rash
- "For a few, it 'switches' pain and pleasure for an hour or two (so a gentle caress brings excruciating burning/ripping pain, and a slap or flogging or heavy punch or cutting wound can induce orgasm)"
- Vornduir is a mixture of herbs and animal essences, and also acts as a "complete and instant" antidote to certain poisons.

There's a number of expressions that people say in his games. These are good for stealing. I admire Ed's ability to create such a rich world. I could not possibly keep all of this straight.

"Nothing is truth that has not been tested in battle."

"Peace stands on a sharp sword."

Ooh that's a good one. I will use that along with "Fargles!" on Friday.

"Blood of the Lady!" (equivalent of "Oh my [insert strongest personal obscenities here] God!" [used as a stronger replacement for "Alavaerthus!")

"Keltor!" (equivalent of "Damn!" and pronounced as "KEL-tor" [spat out swiftly])
"Blood of the Lady" seems usable.

"Foreplay among elves and half-elves (particularly strangers) often includes the wearing of full-face masks or hoods that leave bare only the ears -- and caressing, kissing, or licking of ears (plus throat, backs of knees, and palms of hands) for and by both partners leads to more ardent activities."

"Another postscript from Ed to Erik Scott de Bie: yes, I made those elven erogenous zones up (plus the backs of the knees, and the throat), tips of the ears being THE most sensitive..."
This is just the tip of the iceberg as far as Dirty D&D stories in this archive. It's just.. wow. So much. I'm not sure what to do with it all, if anything.

Here's how a person can get a date in the realms. It's kind of like "hanky code":

What about nipples, you ask? Don't worry, there's plenty of Realmslore on nipples:

"Nipples are clinically referred to as parlarren (singular: parl) and sometimes called thorns, daggerspikes, or (poetically or more politely, as in one woman to another, or a male noble trying to be daringly gallant when speaking to a female noble) springbuds. When trying to be coarse, speakers usually dub them "teats" or "suckworts."

He addresses criticisms of DIRTY D&D:

"Bear in mind, however, that many Realms fans delight in pouncing on me for being a dirty-minded 'pervert' (most of them, of course, not even understanding the meaning of that word) for merely showing casual nudity, kissing, caresses, and even footrubs in my fiction... things many Canadians (and, from my conversations with them, more than a few Americans) who went to summer camp in their teens accepted as normal in such settings."

I never got a foot rub in summer camp. I just made a metric ton of those stupid twisty bracelets.

And then Ed goes to town on how to be a good DM. Here's his 5 main points:

1. Give your players what they want. NOT "give in to them," but work hard to find out what settings (city, wilderness, dungeon, arctic, naval, underwater) and styles (intrigue, hack-and-slash, chase or hunt, etc.) of adventure your players prefer, and make sure you give them the entertainment they crave. Otherwise, why are you wasting your time doing this?"

"2. Everybody loves a mystery. Work three sorts of mysteries into your campaign play: little things tied to the PCs' pasts (e.g. The Six-Fingered Man from THE PRINCESS BRIDE), mysteries unfolding under PC noses... It doesn't matter if you don't know what this motif means; as the campaign unfolds, you'll find a clever explanation for it that will make your players think you've been planning this for years!"

Mysteries have rarely paid off for me in D&D. Just causes a lot of confusion. Either the players guess it right away or they never get it. And I've never been comfortable with the concept of making u an explanation after the fact - it feels like I am cheating the players. 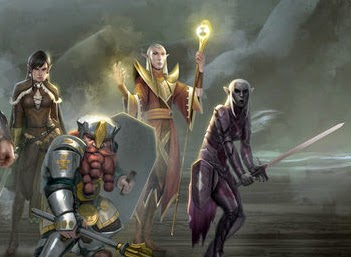 "3. Like a favorite series of novels or television show, build up a colourful cast of NPCs that the PCS, love, like, hate, or just know (as gossips in the tavern, as shopkeepers who know where to get this item or that, and so on). Keep track of the lives, ambitions, and interests of these NPCs to make the setting seem rich and real, and to give the PCs sources they can 'check in with' or 'call on' if they're bored, or need information."

"4. Intrigue and power groups. Remember, manipulating others is something all humans do, and dreaming and scheming is something most of us love to do. Most power groups won't be Fell Wizards with a Diabolical Plan, but a few fat merchants meeting in a back room to get girls behind their wives' backs, or work a little swindle, or something of the sort. Surround the PCs with dozens of these little mysteries, until they think they can uncover something really big - - and then the players will start their own adventures, and you as DM can sit back, 'ride the fun,' and embroider new side-adventures accordingly.

Remember: the PCs are heroes who SHOULD take charge, not just reacting to the world by following the scripts of adventure after adventure you slap down in front of them."

I don't like "power groups". Especially cartels and organizations. They feel kind of mundane to me.

As for letting the PCs take charge... I am kind of leaning toward doing that in my games. I've been running lots of modules and I can definitely feel the players "settling" for it lately. I feel like I am almost walling them in a bit by running a module. I am going to try and mix it up more.

"5. Play sessions are ENTERTAINMENT - - or should be. Watch your players, change things if they get frustrated or bored, keep the pacing moving, forget the rules (except when to do so will start fights/anger players), and concentrate on acting and describing and making things seem alive. Watch a caper movie (for example, the recent remake of OCEAN'S ELEVEN) and notice how (without quite the frenetic jump-cutting pace of a rock video) things keep swiftly and smoothly moving along. By all means plan breaks (gossip and pee-break and chips-devouring time) in play sessions, but otherwise build things to cliffhangers, raise the volume and pace when fights are going on, and generally KEEP YOUR PLAYERS MORE INTERESTED THAN AN ACTION MOVIE DOES. They'll remember your play sessions fondly."

More interested than an action movie. Sheesh, that is a tall order!

I'll be running D&D Encounters at the store today. I'm all prepared, so I'll see if I can make this one more fun than the last. It's tough to use Ed's advice for the game, though - it's a module, and one that I am none too interested in. More interested than an action movie? Yikes, we'll see.
Posted by Sean at 3:57 AM

How much of this is canon? As in, officially endorsed by WOTC? Oh man, I hope the elf mating rituals are included in a new 5E "Elves of Faerun" sourcebook...

The werepegasus stuff was incredibly well timed since that "Bronies" episode of Bob's Burgers last week and that I just watched the new My Little Pony movie this weekend (don't ask)... Neither of those had enough farting in them, though...