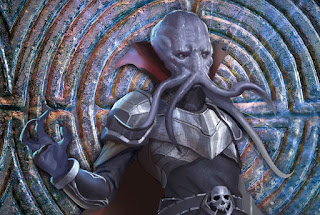 You can buy Dungeonology on Amazon here.

Disclosure: I was sent a review copy of this adventure.

Treasure: I came home today and look what was waiting for me! Dungeonology is a new D&D hardcover that comes out on November 5th. I have started receiving these preview copies of D&D books kind of out of the blue. I am certain that it is because you keep coming to my blog and I really appreciate it. I'll do my best to give you an accurate look at this book so you can decide what you think of it.

Not a Sourcebook: First off, this is not a sourcebook or a monster manual. Dungeonology is more like a coffee table book. It's got a shiny chrome cover on the outside. On the inside, it has all of these weird little gimmicks - booklets, foldouts, maps, etc. 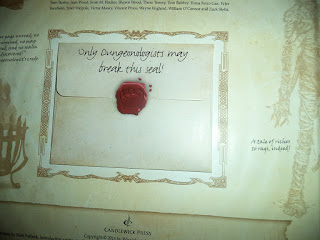 Envelope: Right on the inside cover, there is a sealed envelope attached. In it is a letter from Elminster. He welcomes us to the book and explains that it was written by Volo. I'm really worried about damaging these things or losing them, but they seem pretty sturdy. That envelope is stuck on there pretty tight.

There are not that many pages. It looks like around 20 or 30. They're really thick and most of them have some kind of fold-out attachment.

We start off with a lot of broad adventuring advice. No mechanical stuff. It's all flavor. The sample marching order they give is pretty much exactly what I would do:
The one thing I'd add is to never form a straight line, otherwise you're all going to get hit by a single lightning bolt spell. This has happened to me many times! My beloved frog-man Rudolph, who had a barrel of water strapped to his back, was murdered in this manner.

Magic Items: Then there is a section on magic. There is an actual spell book attached to the page. We also get a description of a wand of wonder and images of a very eclectic mix of magic items. What's nice about these is that you get the entire piece of art, uncluttered. In the DMG, the images of the magic items are all kind of smooshed together.

Some of the items depicted are a cubic gate, an efreeti bottle and a blast scepter, which all look really cool. I don't get why they picked the candle of invocation picture, though. It's just a candle.

Then we jump into an overview of the Forgotten Realms. There's a large image of the vault of the dracolich player's map, which is very cool. 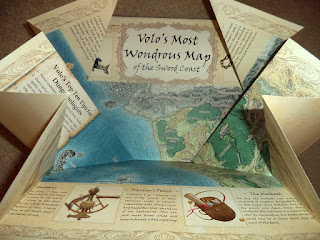 The Map: Then we get to what I think is the most handy part of this book. In the center is a fold-out map of the Sword Coast region of the realms. This is the exact map from Storm King's Thunder, with all of the relevant locations labeled. If you are running chapter 3, you can just plop this down on the table.

The paper is really thick and sturdy. The map folds and unfolds with ease. It is really weird when you unfold it the first time. It catches you by surprise.

This map has descriptions of items on the borders. They include the Wyrmskull Throne and the Morkoth from Storm King's Thunder. The Morkoth mini-map will also be handy, as it is a crucial location in Storm King and it can be difficult to convey verbally.

We get a really nice full page image of one of my favorite pieces of art from the PH: 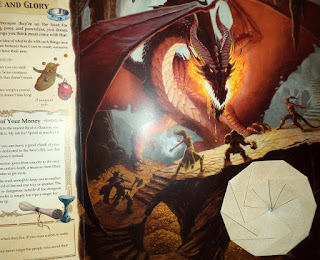 It's got this spiral fold-out thing on it. Call me a weirdo, but I'm afraid to unfold it. Plus, I feel like I shouldn't spoil everything that is in this book.

We get some information on treasure and the factions. Then we move on to the monster section, where there is a special dragon booklet attached to the page. This booklet has a very handy chart that lists the main types of metallic and chromatic dragons as well as their corresponding breath weapons. 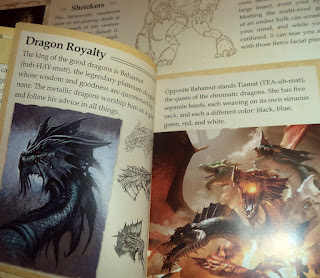 Here's the pronunciation they give for Bahamut: "buh-HAY-mutt." Is that right? I thought it was "bah-HA-mutt."

Villains: There's a list of major NPC villains, including some from the previous 5e adventures. Acererak is one of them.

Heroes: We get some pages on hero NPCs. Most of them are realms people, but we also get Ezmerelda from Curse of Strahd. In the entry, Volo actually refers to the events of the Volo short story in Dragon+ where he went to Barovia and met her. That's pretty awesome.

The very last pages have a surprise. There's a hologram of a green dragon and.. an entire booklet. Volo's Guide to the Realms. 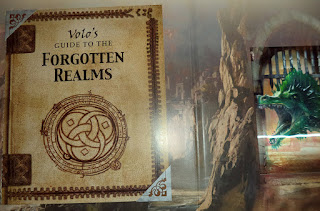 It's about 20 pages long. It contains overviews of a lot of different aspects of the realms. One of my favorite parts is a two-page spread where they go over the "threats," which are the bad guys from the first three adventures.

There are overviews of settlements like Waterdeep, Gauntlgrym, Thay, Candlekeep and Daggerford. I really like Daggerford as a starting locale for a new group. I'd also like it if they started an adventure in Candlekeep. I remember that place being really cool in the Baldur's Gate computer game.

Here's a location they detail: The Tomb of Horrors. They are really going nuts with the tomb stuff in this. Does this mean we're going to get a 5e Tomb of Horrors at some point? I know it is a controversial location, but I get a kick out of it.

There's even a little bit of info on Zakhara, home of the Al Qadim setting.

The very last pages have a diagram of the planes and info on the "worlds beyond." There is stuff on a few places, including Greyhawk and... Sigil! I really hope we get a planescape adventure soon.

Again, this is not a sourcebook. The information in Dungeonology is very broad. It's definitely fun to look through. I would say that this book is a great Christmas present for these types of people:
In a lot of ways, this is a very solid primer to get someone up to speed on all of the basic things you should know to be a D&D fan. Considering that right now we are in a time when there are tons of new players joining in, it definitely feels like this is the right moment for a product like this.

For a hardcore fan, this is useful to fill in gaps of knowledge. The map is extremely handy, and Volo's Guide gives you a good foundation if your realms knowledge is shaky.
Posted by Sean at 3:27 PM

This book is actually part of the "Ology" book series, which includes classics from my childhood like Dragonology, Wizardology, Egyptology, Pirateology... the list goes on. They're all structured like that, with lots of pop-outs, folders, and so forth.

The map looks great, very sturdy looking . . ? More like a light cardboard? Is it made to be removable or not?

BTW, how's it coming on chapter 2 of your adventure path?

Anonymous: Cool. I'd definitely like to see the pirate one. Thanks!

Anonymous: It is not removable. It is not a thick as cardboard. It's heavy cardstock. I am working on chapter 2 right now, I am way behind!

> Here's a location they detail: The Tomb of Horrors. They are really going nuts with
> the tomb stuff in this. Does this mean we're going to get a 5e Tomb of Horrors at
> some point? I know it is a controversial location, but I get a kick out of it.

Given the prominence of Tomb of Horrors in the novel Ready Player One, and the upcoming movie adaption of the same name, smart money says we'll see a 5e version at about the same time the movie comes out (March 2018).

Is Eberron mentioned in among the "Worlds beyond"? Thanks!

Anonymous: Wow I didn't know that. That's cool! I wonder how they would stretch that out to 250 pages? Or would it just be a smaller book?

Anonymous: Nope, no eberron! I would guess they'll get to it sooner or later. They did mention it a lot in the core books.