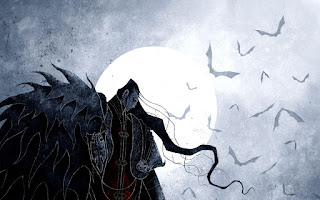 It is Dragon+ time! The cover features Strahd, as they've just released a deluxe boxed set version of Curse of Strahd called Strahd Revamped. I've been reading about that product a bit, and I plan to do a review of it soon. I want to see what they changed from the original, if anything.

The cover art is by Harry Conway. He says that to prepare for this, he watched many dracula movies, including: 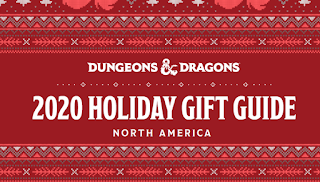 We get a link to a pdf full of D&D stuff to buy for Christmas. There's so much stuff. Here are some of my favorites. 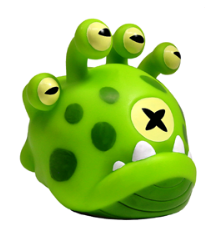 This is one of the Figurines of Adorable Power. It is a plush version of those little beholders that appeared in Waterdeep: Dragon Heist. They have a mimic, a flumph (!) and more. 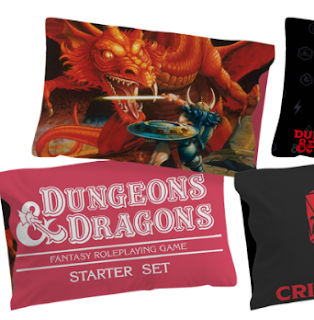 Don't get me wrong. I like pillows. But I have a real problem with too many pillows. I don't want pillows on couches. I don't want 10 pillows on a bed. I want the minimum amount of pillows necessary for a given task, which is almost always exactly zero pillows.

That said, do I want a pillow emblazoned with the classic Larry Elmore red box art? Yes, yes I do. 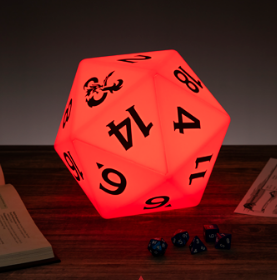 I think I've already mentioned this once before, but I don't care. Come hell or high water, I am going to own this giant d20 desk light that changes colors! Nothing can stop me.

In the Works: Tasha's Cauldron of Everything

There is an interview with Elisa Teague, who did the puzzle section in Tasha's. We are given a free .pdf of a new Tasha's puzzle.

Puzzles in D&D are so hard to get right. I'll never forget one session I played where we had to solve a riddle, and the DM wouldn't let us move on until we figured it out. We sat there for two hours, and the solution ended up being a PUN.

The last line of the riddle was "Oh, well." Which meant we needed to go look at the well in town. The rest of the words in the riddle were meaningless.

In the Works: Curse of Strahd Revamped

You should definitely read this if you cave any interest in Curse of Strahd Revamped, or just Strahd/Ravenloft in general. Chris Perkins talks about a ton of interesting stuff.

Chris Perkins says: “One of the things that a DM needs to think about is, how do I keep the adventure going and keep Strahd present without him running roughshod over the party? Because Strahd is a tough customer. If a mean DM really wanted to, they could end the adventure fairly quickly by having Strahd bear down on the party too soon.”

He also talks about tension:

“If you make the story too tense for too long, eventually fatigue sets in. Sometimes when you watch a horror movie, you realize it’s gone wrong because it’s too relentless. Whereas a movie like Cabin in the Woods blends its horror with humor, to disarm you and set you up for the next horrible thing that’s going to happen.”

The heroes going after Strahd:

“If the characters roam around Barovia, experiencing the misery that has infected this land and hearing stories of Strahd, there comes a point when they come to the conclusion themselves that they have to go to the castle. Sometimes it’s early in their visit to Barovia and sometimes it’s later on. But that kind of player agency is the best outcome. In a good horror story, the heroes have more agency than the villain.

“You want the characters to reach that moment when they say, ‘Okay, we’ve seen enough. Somebody has to do something and we’re ready.’ The strength of the story comes when the characters rise up of their own volition and decide now is the time we’re going to climb up to that castle and deal with that devil. And then, of course, they realize what a terrible mistake that is! They’ve just fallen into Strahd’s trap.”

Some DMs run their game in a way where this option may not be apparent. If you run your game in a sandbox-y manner, then sure, this could happen. But a lot of DMs, at least in my past experience, are railroad-y to a certain extent. The players wont even realize they have the option of dropping everything and going to Castle Ravenloft. They'll wait to be prodded, or given a hook to do so, right?

Also, I could be misremembering this, but doesn't Strahd send the group invitations to come to the castle when it's time?

“By the same token, I’ve also run games at conventions that haven’t necessarily been light-hearted, but have had a very different feel to them. One of my favorite things to do is to have the characters start the game trapped in Castle Ravenloft. They wake up in Strahd’s study and their only goal is to escape the castle with their lives. That’s the setup: there’s a vampire and he’s going to eat you, unless you get out. And by the way, you have no weapons or equipment."

In the Works: Shop Dungeons & Dragons, Powered by WizKids 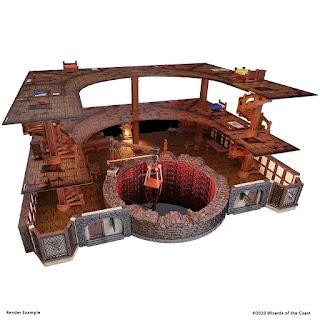 I want to mention this for a specific reason. You can now buy D&D minis and stuff on this centralized site. They have a giant Orcus mini coming out, which depicts the 5e version of Orcus (and not the 4e version that I love so much).

Some people have mentioned this specific item online, so I decided to check it out. A deluxe Yawning Portal Inn premium set, the tavern which contains the entrance to the Dungeon of the Mad Mage, complete with LED lights and a mini of the bartender, Durnan.

Nope. $350. Three hundred and fifty dollars. This thing needs to have an actual working beer tap to be worth that much money.

It's weird because I do all my playing online now, so I really don't have any need for physical minis. I like them. I used to have tons of them.

I actually think this is a cool product and I'd like to see more, the problem is that to me they're too expensive, and I don't have any actual use for them. 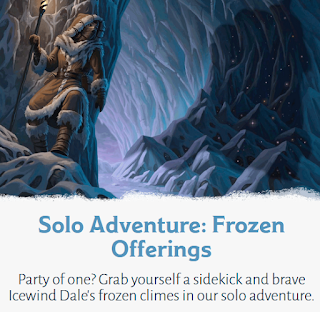 We get a link to a solo adventure .pdf, for free, along with maps. This adventure requires no DM - just you.

I'd love to see someone do a livestream where they play through this adventure alone. If they die, they die.

This is where we get fresh .pdfs of articles from older editions.

Maps of the Month

One of my favorite things about Dragon+ is the free maps! This month we get ice-themed maps, including two from Rime of the Frostmaiden: The Caves of Hunger and the Frost Giant Ice Lodge.