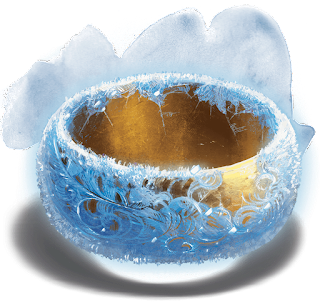 Last episode was really good, and so was this one. I'll have some spoilers at the bottom, so beware!

The waffles have spent 3 days in the wilderness. one night, Diath notices that Strix is gone.

He heads into the jungle and spots greenish witchfire in the bushes. It's Strix. Her staff is spinning in the air. She's trying to turn it into other things. Diath watches, remaining hidden.

Each form the staff takes matches one of the runes on her staff. The forms include:
Diath creeps back into the waffle hut.

We learn that Paultin sleeps with Simon and the hand. Chris speculates that maybe the hand does other things for Paultin. The players are aghast.

They travel for 6 more days. The group (except for Evelyn) loses more hit points due to the death curse.

The group enters a frozen section of forest. There's an icy ship in the treetops above them. It apparently fell from the sky. They see some letters on the ship: "AR GO."

The group makes their way up with flying powers and a dimension door spell for poor earthbound Diath. On board, they see a wizard who was killed/frozen by the ice and snow.

Uh oh. The waffle crew is attacked by a sabretooth tiger made of ice! Does somebody else have the ring of winter? The heroes are hit with a blast of cold energy. Diath and Evelyn take 35 points of cold damage, the others take half.


Diath chucks a dagger at the tiger... natural 20! Then he has to make a Dex check and rolls a 1. Due to the icy deck, he falls off the side of the ship. Wait.. he grabs onto some vines at the last second.

While dangling, he sees more of the ship's name. "Star Go..."

Strix fireballs the ice tiger. It's vulnerable to fire and takes quite a bit o' damage.

A giant hand of ice hovers over Evelyn and begins crushing her. She takes 13 damage.

Strix looks around to find the person with the ring of winter. Rolls a 20! She spots Artus Cimber in the distance. His eyes are glowing blue. The group correctly guesses that he has succumbed to the evil of the ring.

Artus goes: "ICE to see you, Strix." The group can't handle this premium-quality dad joke at all.

Evelyn tries to escape the hand by igniting the fiery heart of Spinelli. Evelyn acts out the moment because she is into it and thus, it is awesome.

Anna sticks her neck out and pushes the boundary just enough to create space for the other players to feel more comfortable in their roleplaying. This is one of the reasons I think she is the most unselfish and pure D&D player out there.

Paultin is encased in ice. He's frozen with middle fingers up.

Diath maneuvers as the tiger makes a mighty leap. It misses and shatters into pieces.

The group takes a breath and checks out the wreckage of the ship. One dead person on the ship is holding a frozen key. There's also a chest below decks. Strix sees that the chest has a glyph of warding on it.

Paultin casts locate creature to try to track Artus Cimber. Man! Well done! That's a spell I don't see taken, let alone used very much. Artus is on a tree branch nearby. He's about to snipe them with a longbow.

Diath grabs the key and opens the chest. In it is a black egg with a window in it. There's another key hole. There is some kind of clock in it.

Evelyn flies up and beats up Artus. Strix devastates him with a fireball. Strix yells for Evelyn to cut his hand off. Do it!

Paultin throws the severed hand at Artus. That is such an awesome idea. It latches on to the face of Artus. Artus falls out of the tree and into the ship. He crashes through the deck and he lands near Diath, who is still ogling the chest.

Artus is not moving. Paultin's undead severed hand is trying to pry the ring of winter free. Umm.. do not let that hand put on the ring!

Evelyn lands next to Artus. He mutters something about Alisanda, and dies. Evelyn tries to cast revivify.. nope! His soul is now in the Soulmonger. Yikes.

The hand puts the ring on... ohhh no. Ah.. the hand gives Paultin the ring. Paultin is trying to decide if he should put it on.

Strix examines the "bomb" in the chest. The energy inside it is similar to that of a magic missile. A force bomb?

Paultin puts on the ring of winter!

Next week.. Chris won't be there but there will still be a show..? Waffle crew backstory episode! That sounds great. It will be fun to see the players running around unchecked by the DM.

I think that the last episode AND this one are two of the best episodes of the whole show so far. I love it when Nate busts out a problem-solver out of nowhere.

OK. The Wreck of the Star Goddess is on page 85 of Tomb of Annihilation. In the book, the crew is alive and there's an encounter with ghouls. There's no treasure, either.


This egg might be the Navel of the Moon. Check out page 168. There's an egg-shaped egg in a certain container (trying to avoid too many spoilers, here). On page 128, it says that it's a polished, egg-shaped stone  that the wielder can use to "always find the way home to his or her loved ones."

On page 189 it says: "Whether the stone has its purported power to reunite families is up to you."

The thing is that Chris said it is imbued with force energy, which is what magic missiles and walls of force (obviously) are made of. That doesn't really fit, right? I'm probably missing something obvious.

It is possible that Chris has modified the Navel so that it can be used as a device for Diath and Strix to learn more about their past. Maybe the group was meant to interact with the NPCs more in Sigil ? Is there information that the NPCs didn't get to impart that will influence adventures down the line?

The ring of winter is on page 297.  It's insanely powerful! Paultin will probably struggle with this thing, but if he can keep it together, he'll be able to do awesome stuff, such as:

Pretty cool, right? ...cool? Is this thing on? I think that Paultin's really going to ring in the new year. Anyone?