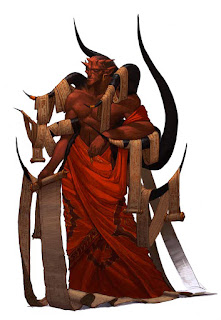 We played Planescape again on Sunday night. I have got a ton of great things going on in real life, which means that I didn't really have too much time to prepare for this session.

I sat down and brainstormed an outline and then made some contingency plans. After that, I wrote a page or two of notes along with stats of monsters and magic items.

I knew I wanted to use one of my favorite devils of all - the contract devil from Pathfinder. I first read about this guy in this path:
Pathfinder Adventure Path: Curse of the Crimson Throne

Lo and behold, it was another awesome session. There seems to be a real sweet spot when it comes to preparing for a game. If you don't prepare at all, you're screwed (or at least, I am). If you prepare too much, your game comes off as stiff and rigid.

Each character has powers linked to the Lady of Pain:

When they use one of these powers, they gain level four exhaustion. The only way to remove the exhaustion is to spend days pursuing their beliefs (belief is a big deal in Planescape).

Last Time: The group had narrowly escaped an attack by a rust dragon by heading through a portal to Mechanus, the lawful plane of the modrons. Their enemies, the devils, were there and wanted to meet with them. 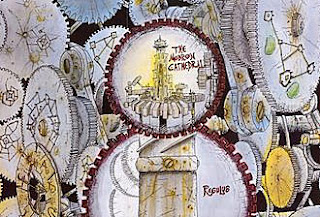 Bidam's armor had been rusted into oblivion, so he just walked around butt naked. The modrons didn't care at all.

I know in the 2e books that the modrons are supposed to be uncaring, but I run them like they are happy to see the heroes. The adventurers did, after all, escort their rogue modron march through the planes and take down the guy impersonating their god.

So, the modrons gathered around them, bopped up and down and made the dial-up modem connection noise.

The heroes were brought to the Modron Cathedral, a building with hundreds of floors. They met with the bad guys in a conference room:


Contract devils are from Pathfinder. To me, they are the most well-thought out devils in D&D-type games. I tried for a long time to come up with how an infernal contract actually worked in D&D, but I never got anywhere with it.

Contract devils can offer heroes 3 wishes or a devil slave. All the hero has to do is sign over their soul. This means that the hero can't be raised from the dead if they die. They are reborn in Hell and are magically bound to the contract devil for all eternity. There are two ways out of the contract:
So the bad guys had an offer for the heroes. Quimath had gained the power to control where the Iron Shadow went thanks to his giant iron book. Quimath told the adventurers that he wanted them to sign an infernal contract saying that they won't interfere with the devils. The devil wanted to unmake every chaotic plane, starting with the Abyss. 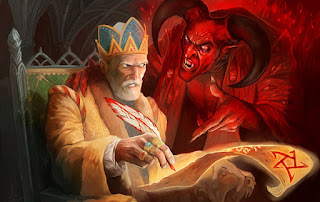 In exchange, the heroes would be given their own plane. They could just pick a chaotic plane and the Iron Shadow would unmake anyone on that plane who opposed the idea.

The group had no intention of signing up for this. The devils told them to sleep on it and decide in the morning.

Bidam was much, much more intrigued by the idea of signing over his soul for three wishes. The players began brainstorming what to wish for. I put this option in the adventure just to see what happened.

Bidam has a cloak called Fiend's Embrace, which holds the consciousness of a pit fiend named Drokkarn. Being a devil, Drokkarn was able to give the group advice and pointed out loopholes in the contracts that the devils could use to their advantage.

Drokkarn cut a deal with Bidam. He offered Bidam this advice on the condition that he get to use one of the three wishes. Bidam agreed right away. I was shocked.


Immediately I got excited, as obviously Drokkarn would wish to be a pit fiend once more. I loved the idea of having a future session where the heroes adventured alongside a pit fiend! Heck, I wrote a whole guide to pit fiends, I've got material up the yin yang.

The heroes retired to separate bedrooms. Theran went into a trance (he's an elf). His book glowed. In most adventures, his book glows and gives him powers. In this one, he learned that the book has the power to suck entities in it and trap them. The problem is that Theran would have to make a saving throw or get sucked in, too!

She proceeded to try to seduce Bidam through a skill challenge, just like Bidam does to other people. She rolled well and one thing led to another. I thought it would be funny for Feurina to be into doing "wrong" things with her partners - for her, being "wrong" means monogamy, kissing with no tongue and promises of marriage.

Because of their weird connection to the Lady of Pain and the Iron Shadow, when these two got it on there was a weird, magic/magnetic reaction. Their souls and psyches intermingled. Bidam now had many of Feurina's memories, and Feurina had his. Bidam could now speak infernal. Weirdest of all - they now had the power to summon each other, across planes if necessary!

Bidam fell asleep and had a dream. A while back, Quimath and Theran had gained dream-powers from the Dream Well. Quimath used his power to enter Bidam's dream to mess with him.

Basically it was like the movie Inception. Bidam dreamed he was in Sigil. Buildings started falling from the sky, threatening to do real psychic damage to Bidam.

Theran sensed what was going on in his trance. He entered Bidam's dream and defended Bidam. Quimath summoned a dream version of the Mercykiller Wyrm (the wyvern-thing that publicly executes people in Sigil). Theran turned it into a cat. Quimath bailed out of the dream.


The next day, the group got a magical sending from their friend, Fall From Grace. She had been trapped in the magical Keister-Realm, but she used her power to go ethereal and escaped. She had rescued the Mercykiller refugees and was in Sigil ousting Factol Nilesia. It sounded like Theran's problem with the Mercykillers was being resolved.

A Mechanus faction tried to recruit Theran. They were called the Mathemeticians. They believed that the cogs and gears of Mechanus were the framework of the Multiverse. By understanding them through math equations, one would know all there is to know abut reality.

We did a whole thing with math and the group got some magic items. Theran got a Mechanus eye, which gives him a bonus to perception checks. Bidam got magic plate mail adorned with black dragon hide. Bidam now has an AC of 20, I think.

I've been very hesitant to give out even +1 armor in my games because I get worried they'll be too hard to hit. But I figured it's kind of lame for these characters to be 9th level and have no magic armor.

The Mathematicians showed Theran the Orrery, a huge device in the modron cathedral. With it, you can scry anywhere in the planes. There are two catches:
Theran wanted no part of this thing.

The group met with the devils again. Quimath was not there - he was "busy." The group was alarmed, to say the least. The heroes refused to sign the contract, but Bidam signed over his soul to the contract devil in exchange for three wishes!

Out the window, they spotted Quimath on a small, floating gear. He held up his iron book and summoned the Iron Shadow, who is over 100 feet tall. She began unmaking the gears of Mechanus!

Bidam started making wishes. He wished for the iron book. It appeared in his hands. Quimath was none too happy. Theran walked up to the window and held open his book. He used its power to suck the Iron Shadow into it! He rolled his save - and failed. Theran was sucked into the book as well, trapped.

The devils started hacking away at Bidam and Selinza. Bidam snatched Theran's book and made another wish - he wished to teleport to Burningwater, 9th layer of the abyss. This is the home of my homemade demon lord Bazuuma, and Bechard the obyrith.

This blew my mind, because I had cooked up a whole scenario involving Bazuuma. Short version: Iggwilv tried to force Bazuuma to magically bend to her will and Bazuuma beat her up in an epic battle. Iggwilv didn't know Bechard was there and an ally of Bazuuma, and it got ugly.

While running away, Iggwilv did snatch Bazuuma's consort, who is a demon-dragonborn clone of Bidam.

So anyway, Bidam and Selinza appeared in Burningwater. Bidam had the bad guy's book and a book with Theran and the Iron Shadow trapped in it.

Drokkarn appeared beside Bidam in all his pit fiend glory. Remember, Drokkarn has a thing for Iggwilv. So.. next week should be real interesting!

It was a really great session. I am planning on doing some Iggwilv stuff next session and then I want to run the Limbo adventure from Tales from the Infinite Staircase. I think I can use it to resolve the whole Iron Shadow storyline and we can have a final epic battle, which I have half-mapped out so far.
Posted by Sean at 5:26 PM

It's these sessions that keep me coming to your blog! Awesome. Any references to published material to pass on for this session?

Jason Raabis: Thanks! I love writing about the games. It's hard not to blab on endlessly about it, though.

I read the entire Mechanus book in Planes of Law for this. That's got tons of details on the Modron Cathedral, the Mathematicians and the rule that there is only one language in Mechanus and everybody who is in Mechanus speaks it. Drokkarn/Fiend's Embrace is from a Dungeon magazine adventure during the 3e era. The Contract Devil is from the Pathfinder Curse of the Crimson Throne path, which I tried to run for 4e in 2012 but the first session was something of a fiasco and I bailed out on it. Quimath and his home city of Panos Quitel in hell are from the Tales from the Infinite Staircase adventure. The Gorechain devil is from the 4e MM 2. I really love those guys.

There's so many cool forgotten ideas from old editions. People churn out awesome content, but you can't fit that much in one session so a lot of it is barely touched. I like to go through old stuff, find the cool ideas and bring them in. In my opinion, you don't really need to create new items or monsters for D&D because there's so many of them in past editions. To me, it's better to convert the old ones to 5e and use them! It's such a waste to let them lay dormant.