Episode 6: All Will Be Well

A new player joins the group tonight. Erika Ishii plays a fighter who I think is higher level then the rest of the party. She's very cool. I'll add some thoughts about her at the end of this summary.

Last time, the heroes arrived at Vallaki. Vallaki is a village full of fun stuff and I am really looking forward to seeing how everything plays out. 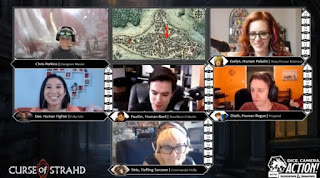 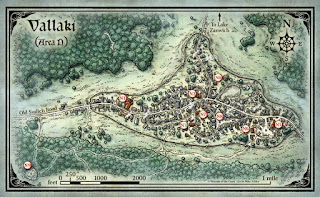 The crew enters Vallaki and they spot Rictavio's wagon of wonders. Evelyn gets excited and the group goes to check it out. Evelyn knocks and loudly inquires about the wonders. They hear a commotion inside - wood cracking.

Chris shows the players the picture of the wagon from his book. They should try and put these images on the full screen for a moment, so we can get a good look at it. It's hard to see inside Chris' tiny rectangle.

Erika's character comes over and warns the heroes not to go in. Her name is Dee. Dee is 6 1/2 feet tall, she has dark hair and scars all over her face. Apparently she is part of Rictavio's show - she's a strongwoman.

Dee does card tricks, and Erika actually has a deck of cards and hilariously does a trick. Awesome.

The group goes to the Blue Mountain Inn. Paultin plays music in exchange for free rooms. He rolls good. Dee and Evelyn dance.

Two hunters who smell like barf tell Evelyn she's going to die soon. Dee tells the guys to shut up.

Strix makes friends with the owner, Urwin Martikov. He talks to Strix about Izek Strazni - the guy who is probably her brother. He also warns her that the Burgomaster of Vallaki is crazy.

Dee introduces the group to Rictavio. Evelyn subtly peers into Rictavio's journal (which is full of fun stuff) and sees notes about Filmore Stunk. She can't make out the whole line, heh heh. I used him in my Planescape campaign a few weeks ago.

Rictavio starts translating Madame Eva's reading for them. Rictavio basically gives the group a road map for the campaign:
I am really interested to see Chris run the Amber Temple. It's an awesome location and I can't imagine what the group will do when they get to the final rooms. Just picturing Evelyn in there is funny.

Strix talks to Rictavio alone and intimidates him, warning him that if he doesn't help the group they're stuck here. Rictavio tells her that he's cursed by the vistani and if he helps them, they are doomed.

Paultin is drunk and can't remember his reading. Evelyn remembers. Chris gives her inspiration for that. I think Anna took notes on the entire reading in real life, which is just another reason why she is a fantastic player.

Chris reminds the players that some of them got inspiration last time. It's funny, inspiration often goes forgotten. You'd think players would really latch on to it, but that is usually not the case.

The group goes back downstairs, and spots some menacing town guards. Diath detects a secret door (he rolled a natural 20 on his check) and the group slips through. A guard calls out for the group to halt, but they shut the door and go down the hall. The group ends up going through a few rooms and peers outside the inn.

They spot Izek and a bunch of guards outside. One of Izek's arms is huge, red and demonic. The group tries to keep out of sight and creep away. Dee goes out there and tries to distract them with a card trick. Izek questions her, sees through her deception and we roll initiative.

Izek pulls out a huge axe and does 21 points of damage to Dee. Yikes. Dee hits him with her shield and knocks him to the ground, then she stabs him with her spear.

The group comes out to help.

Diath flings daggers and kills a guard. Evelyn charges out and hacks a guard with Lightfall, her axe. She rolls a natural 20 and cuts a guard in half.

For the critical hit, Chris has Anna do max damage and then roll damage again and add it. I believe that is a critical hit rule from one of the playtest packets. I don't really like the 5e critical hit rule (roll damage twice, add it together and then add bonuses). I kind of like good old-fashioned double damage. The extra rolling is a bit of a pain and explaining how it works at the table can be a little awkward.

Izek does somewhere around 30 points to poor Dee. The guards stab her for more. She's still up! Wow, she has a ton of hit points. Evelyn heals her for 9 points.

Paultin casts Invisibility on Strix. She calls out to Izek and tells him she's his sister. She casts mage armor and becomes visible. Izek stops the fight and questions her.

Izek runs up and awkwardly hugs her, and that's where we stop.

Chugging Along: The first hour was too unfocused for me. The group spent a lot of time chatting by the wagon and in the inn. Once the group talked with Rictavio, things got moving. I like Chris' Rictavio voice. Honestly, this is a pretty skippable episode.

Dee is Good: I really like Dee. She is a character that you immediately get a vivid mental image of. Erika has a great voice and she brings a certain electricity to the game. I don't know if Dee is a permanent addition or if she's a "guest star" for a few weeks like Chris Trott was. Maybe we'll see another group made up of Chris, Erika and other guest stars down the road.

A Thought: Some day I'd really like to see Ed Greenwood run a campaign. He's been running games forever and he has a fantastic voice. The material he cooks up on Candlekeep is really amazing. The guy has fleshed out every little detail of the world.

Where did Ireena go?? I thought Izmark went with the children but she stayed with them right?

Anonymous: I think everyone forgot about her! I hope they remember next time, as Izek has an interesting thing when it comes to Ireena. A far as I remember, you are right, the brother took the kids to Barovia and Ireena is sticking with the group so Strahd can't get at her.

You read this, right. Can you tell me why the guards attacked them? Is this something I missed or just another dm Chris change? I'm having ano interesting time in vallaki now, izek swiped ireena, but otherwise the town really likes them for getting the bones back and the vamps out. Now the guards will have to choose between the group and izek.

jerry247: I think Chris wants to keep things moving. The sessions are only two hours and he wants to keep things exciting. Maybe the baron was onto Rictavio and wanted to hand him over to Strahd, or maybe Izek wanted to get a look at the newcomers in town and make sure that they were not spreading "malicious unhappiness" or whatever it was. Did you run the encounter with the people in the stocks wearing donkey masks? I think that encounter is cool but I was wondering how it would affect the game in play.

I've been watching it for Chris, but the crew bumps me down all the time. I believe they disrupt the atmosphere he tries to create cracking silly jokes one after another...