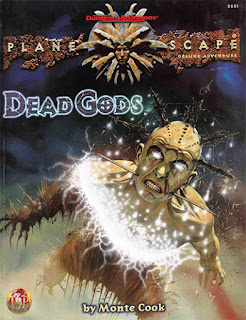 I know I've been absent for a few months on the blog, so I have a bit of catching up to do. My group is pretty far into Dead Gods as of this writing. Over the next week or two I'll be posting summaries here to get back on track. 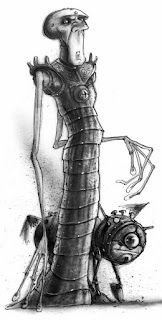 Once I stopped running games at the store, I kind of lost interest in D&D to a degree for a few months. I still like running games, but when I'm not plugged in to the encounters program I feel very out of the loop.

Dead Gods is hailed as something of a classic. It's a book with a pile of linked adventures, dealing with a mysterious entity who is killing gods and wreaking havoc. Obviously there's going to be spoilers in these posts, so beware.

We had finished "Umbra" by Chris Perkins, a really fantastic adventure set in Sigil. The thing I liked most about it wasn't the overall plot, but all the cool Sigil details and locales. It was very vivid and really made Planescape fun. Monte Cook is awesome, but his adventures don't quite reach the heights of the Perkins stuff. Monte has good ideas but in some cases they are not fleshed-out enough.

If you remember, the group started up a bordello. Their talking cat, Jysson, runs it. 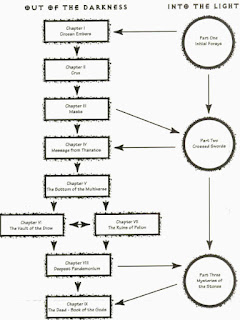 Dead Gods is organized very strangely. There's two adventures which are meant to occur alongside each other. It's quite confusing. There's a flowchart. One adventure is called "Out of the Darkness," and the other is called "Into the Light."

This adventure I was supposed to run first - "Initial Forays" - was really confusing to me. There's all these details to keep straight. Basically, there's this temple in Sigil that has some weird stones in it. Two factions are fighting over it. There's a mystery person behind everything, who is basically trying to get the two factions to go to war over it. 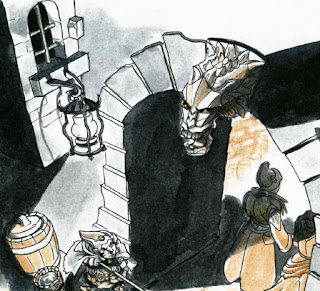 The factions in Planescape have always been a problem for me. There's a million of them, and it's shockingly difficult to find succinct information on them. They have all these nicknames you're supposed to keep track of. It's hard enough to keep 15 (?) organizations straight, much less remember all of their different names.

The factions involved in this scenario:
All sorts of factions are hiring out investigators to find out what is going on in the temple. My job as a DM is to keep track of the investigators timetables to see if they either bump into the PCs, or beat them to the punch. This was just too much for me, so I simplified it. The investigators:
Post-Umbra Downtime

We started off our session with a bunch of subplot stuff.
Finding Hulester 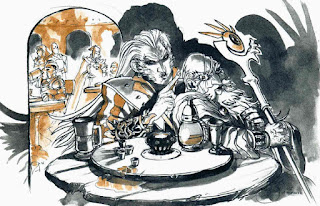 The adventurers are hired by my D&D Donald Trump NPC's son to look into this whole church thing. They were told there's this guy Hulester who knows stuff, and that he's at the Ubiquitous Wayfarer, a tavern I've been foreshadowing for a very long time.

The heroes went to the tavern, which is a cool locale. It's full of portals to different planes. It has a statue that tells riddles, And there's a really cool NPC in there. She's a tiefling named Nherid "...who sports long black nails and black eyes with no pupils."

The heroes met Hulester, who agreed to talk to them if he'd hook them up with the woman who owned the Wayfarer. The heroes set up a date in a nice area of Sigil. He gave them a bunch of clues.

The adventurers decided to spy on the date, wondering if Hulester was shady. Along the way, they spotted a few cranium rats watching them. They snatched one and learned that Ivth was also investigating the temple.

Another agent was on their tail. It was Gremmith Mi, the hefty rogue. As the adventurers spied on the date, he spied on them. He fired off a poison dart that missed, and sparked an epic battle on a rooftop. Gremmith ended up plummeting to his doom.

Outside the Wayfarer, Bidam and Theran had met a guy called "Barmy Kank." He's from Dark Sun. When I was younger, this bothered me a great deal, because Dark Sun is a closed sphere.

Barmy Kank knew of a secret entrance into the temple. He brought the adventurers there. Malweis the paladin was checking it out too. The heroes befriended him.

Showdown at the Temple 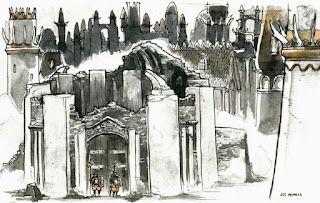 Inside the temple, Ivth and his barghest henchmen were poking around. A big fight broke out, and the heroes won with Malweis' help.

The interior of the temple had 5 huge, weird stones which apparently had caused some people to vanish. Theran assumed they were portals, but he couldn't figure out how they worked, even with warp sense (the function of the stones isn't revealed until the very final chapter of the whole book).

That's it. There's nothing more to do here. The adventure just kind of shuts down at this point.

This scenario had some cool stuff in it, but it was a heck of a lot of work to prepare for. Worse, even with all my notes, I still couldn't keep it all straight when I ran it.

But Dead Gods was off to a start. The next adventure had a lot of fun ideas in it...

Check out the next chapter of Dead Gods here.
Posted by Sean at 11:52 PM

Good to see you back posting. Interesting observations on the critical nature of chemistry in a D&D game. This is why I don't have much interest in cons, or running games at stores, etc.

Chemistry is so important. I have a group right now with excellent chemistry. Tons of fun. I've had plenty of groups without great chemistry.

Your dedication to D&D seems pretty ... intense? It seems like you take "failures" pretty hard. I was surprised by how hard you seemed to take the falling out at your encounters games. I'm not sure there are many who are that committed to our hobby in the same way. I care about D&D a lot, but when groups don't work out it has never made me consider larger issues about the game itself. Maybe it should.

Anyhoo -- excited to keep reading about these planescape campaigns. It was always one of my favorites.

I'm glad to see you back as I had missed your posts. (I read them regularly through rss in feedly.) I love your session write-ups as well as your "Everything you need to know" series where you go through the D&D mainstays through the different editions. They're fantastic stuff and they've even convinced me to use the older stuff that I was wary about as I'm a relatively newer DM.

I'fe yet to find the right balance of players in my home game, and I wish I could just DM a two person group like this as it seems much more fun.

Please don't be too disheartened as you have at least a couple readers who enjoy your posts.

Sad to hear that you've become disenfranchised. Maybe ask people for their long running game stories as a survey (like the 'bad dm stories' one), see if that observation is a truism?

Anyway, nearly woke my baby up when I looked in and found you were back. I punched the air in joy that the best DnD blog on the internet had returned and knocked a cup off my bedroom desk. Hope that image cheers you and that you eventually find a group that keeps you motivated. Not sure AL is the best place for that, though.

Ivan: Yeah the whole store thing really bugged me. I'm over it now. Thank you!

Christopher Santee: Two players is awesome, but if they are quiet people it might not work. What' nice is that usually the shy player come out of their shell in small groups. Thanks for the kind words!

Benji: Ha! Awesome. Thank you! Right now I am seriously thinking about having my group go through whatever the next "official" adventure is.

Matt: Trawl away! Thank you. Out of the Abyss is pretty cool, I hope your game is going well.