I had a hard time adjusting to not running the Wednesday game, so it was nice to get a session of The Great Modron March going tonight. Jessie is away, so I was able to bring in a guest star - Dark's dad!

He has taken over my Wednesday Elemental Evil game, and he told me about how the game has been since I left. He decided he wanted the adventurers to go into the earth temple, so he somehow worked in a trip to Womford, which led the group back to the Sacred Stone Monastery and down into the earth temple. When they left off, they were about to walk into some kind of massive battle involving cultists, duergar and maybe even a bulette.

He made a gnome wizard for tonight's game. That meant the party consisted of ... 2 wizards.

Aluran was new to the city of Sigil. He was in search of the answer to a great question of life. He was in The Friendly Fiend, a magic store run by a grinning ravaasta, when he was accosted by a Xaositect (a faction full of crazy people). The Xaositect recruited Aluran for a job that paid quite well and it involved the Great Modron March.

Theran was in his office in the Clerk's Ward. His friend Alamandra, the githzerai, came to visit and told Theran of a job opportunity.

The Face of Gith

Theran and Aluran both headed to The Face of Gith, a githzerai tavern. In the middle of the place was a blob of primordial chaos hovering in the air. 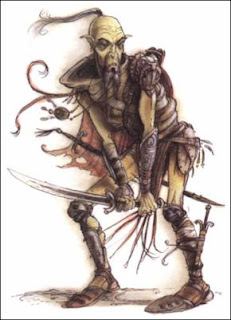 They met with a githzerai named Haeronimil who told them about the job:
The githzerai were helping the modrons just to get them through Limbo and out of their hair. The githzerai lived in Limbo and didn't want the modrons there causing problems. Modrons and slaadi were more or less mortal enemies.
Chaos Shaping

The adventurers each took a stab at chaos-shaping the primordial blob in the bar. The surly githzerai watched on, and were impressed. Both wizards did extremely well.

In fact, Aluran came back the next day to practice some more, and had a little chaos-shaping competition with a githzerai. The githzerai shaped a bust of Aluran looking a little stupid. Aluran responded by creating a sculpture of the githzerai going to the bathroom.. and rolled a natural 20. The patrons of the bar were very impressed at Aluran's natural skill, and he was accepted amongst the githzerai there.

A few days later, the heroes took a portal to Yggdrasil, the world tree, where the modrons were marching. The modrons were divided up amongst many different guides. The heroes were given 200 modrons to lead through limbo.

The trip through the chaos of limbo would take about 36 hours. 15 hours in, they'd need to pass through a chaos storm called the maelstrom. On the other side of it was a more unstable region of limbo called the Immeasurable. There, they'd find a portal to the gate-town of Xaos in the Outlands.,

Aluran took charge and chaos-shaped a meadow and a path out of the raw matter in limbo.

Chaos Shaping is extremely cool. The higher your intelligence, to larger a region you can create. Characters with high intelligence scores can create regions miles wide, buildings, forests, you name it. 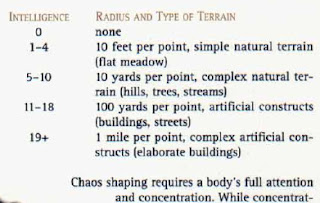 In the adventure, it says that the chaos-shaper can't do anything else but walk, as they needed to concentrate to maintain the stability of their creation. I changed this so that it used the 5e spell concentration rules, to allow the PC the ability to do stuff. There's only two PCs, I can't have one be useless in combat.

The journey began with the modrons asking the heroes all sorts of questions about the nature of chaos.

Then they experienced miniflux: 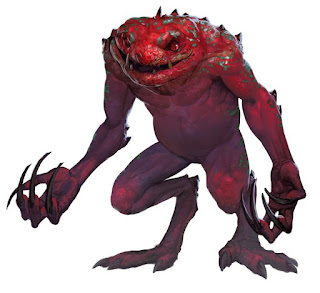 After hours of marching, the slaads began to attack. A swarm of red slaads exploded out of a fissure in the meadow, attacking the modrons and the heroes.

Because I was running this for just two PCs of 3rd level, I scaled this way down. These "lesser slaads" were basically orcs. I gave the red slaads a croaking power that caused those who failed a save to have disadvantage. This is a scaled-down version of the 2e red slaad ability to stun people on a croak (!).

During the battle, Theran was clawed and he was infected. A slaad tadpole was growing inside him. In three months time, it will explode out of his body and kill him! 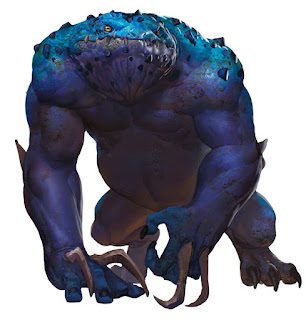 Ten modrons died in the battle. They continued marching... and a swarm of blue slaads attacked! A blue slaad bit poor Theran, and infected him with a different malady - Over the course of three months, he'd turn into a red slaad! Theran's future was looking grim indeed.

With the blue slaads repelled, the march eventually arrived at the maelstrom. The maelstrom is so chaotic, that the adventure says that attempts to chaos shape have a -4 penalty. I posed an interesting question to the heroes. What do you create to get you through the maelstrom? The modrons were utterly terrified of it.

Once into the maelstrom, though, their dice went ice cold. The chaos shapers failed roll after roll. The vessel was hit with a huge boulder. Then it was struck by lightning! The river dispersed into the vortex and the vessel was torn apart. The heroes and the modrons were tossed about in the chaotic storm. Many modrons vanished screaming into the howling chaos, never to be seen again.

The adventurers and many modrons grabbed hold of a building on an earthmote. The building had greek columns that they were able to clutch on to as the maelstrom raged around them.

The wizards shouted to each other above the cacophony, and came up with an inspired redesign of the vessel. Together they chaos shaped a new vessel with a treadmill in it. The modrons could march on the treadmill, which gave the vessel power to propel it forward.

I thought this was so hilarious and clever that there was no roll - it just happened. The chaos shapers used the raw material of the building with the greek columns to create their vessel, and they triumphantly powered their way through the maelstrom to the other side.

Now all that was left was to pass through the Immeasurable. Aluran decided to chaos shape a safer path - a long hall with walls 20 feet high in each side. This put the modrons at ease. There were only 90 modrons left alive at this point.

They marched without incident until the final encounter...

There's this githyanki named Torrenth who wants the modrons to stay in Limbo to mess with the githzerai. She has some allies - chaos imps. Check out their crazy power: 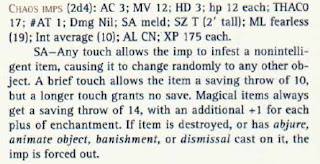 They infest the heroes equipment!

So... the imps swoop down on the adventurers. An imp inhabits Aluran's dagger, turning the dagger into a pamphlet entitled: "Why You Suck - an informed critique of the gnome wizard." The chaos imps are perfect foes for low level PCs, because they theoretically don't have to do damage but are still obviously dangerous in a weird way.

Torrenth uses misty step to appear before the group. She gives the heroes a chance to surrender, but a fight breaks out. I severely de-powered the githyanki, as a normal githyanki does piles and piles of damage. The wizards were clever, using multiple rays of frost to reduce her movement to zero.

She surrendered and after a lengthy interrogation, the adventurers decided to let the modrons kill her.

The heroes brought their 90 surviving modrons to Xaos. As it turned out, many expeditions fared even more poorly. The heroes were paid 500 gold and they went home to Sigil.

Aluran decided to live above The Face of Gith, to hone his chaos shaping skills and to befriend the githzerai.

It was a very fun session. It's always cool when people you know meet each other for the first time. They got along very well.

I am thinking of maybe running Out of the Abyss on Sunday nights when it comes out, as I really like running the current 'official' adventures. That's months away, though. We will easily be done with this by then. I may be able to squeeze in the Chris Perkins Planescape adventure "Umbra" as well.

Check out the next session, where Bidam returns and the heroes try to rescue a modron from an insane gate town.
Posted by Sean at 12:53 AM

I'm loving your play-by-play of the Great Modron March, and your entries regarding the Slaad has me totally in the mood to create a Planescape campaign for my players. I have a couple of questions for you: which races were open as PCs for your players, and what is the starting level of the GMM?

Coffeemate: As far as races, they picked ones out of the 5e PH, but I'd have allowed just about anything. Planescape races include Bauriaurs, Githzerai and Tiflings (planescape tieflings have special random traits that they can choose or roll on a chart for).

The first adventure is for 1st to 3rd level PCs, but the latter ones go pretty high. I think it is expected that the DM adds in other adventures between chapters. I chose simply to scale down the adventures, and it's been OK so far.