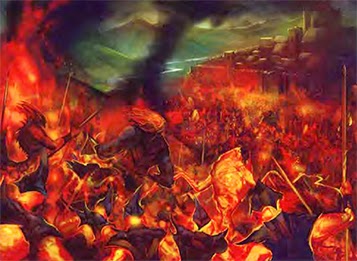 In this article, we're going to take a look at a creature who has appeared in many D&D products throughout history. He is Imix, an evil fire lord who is often linked with the Elder Elemental Eye, also known as Tharizdun.

I will attempt to collect the relevant lore to give you a basic outline of what Imix has done, and what you can do with him in your own campaign. I feel like I may have missed some things, but this should give you a nice foundation to work from.

For whatever reason, a lot of the depictions of Imix are less than inspired. The artists also seem to stray from the author's description. Most times, Imix is described as a humanoid column of flame. To me, this means he doesn't have legs, just a twisting column of fire. But most times, Imix is drawn with legs. 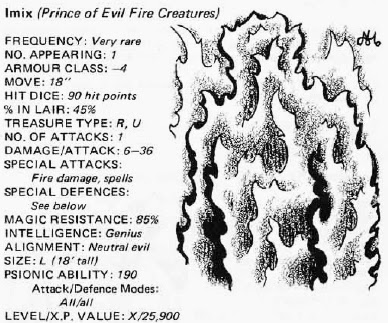 In the "Elemental Princes of Evil" section of this book, it is noted that the Princes have all sorts of at-will powers like teleportation, detect invisible, and dispel magic. Traits:
Egg of the Phoenix

You can pick up the pdf of this adventure for cheap here. I've barely flipped through this adventure prior to this article. There's so much to say about it that I don't even know where to start. There is a thread that discusses it at length here. 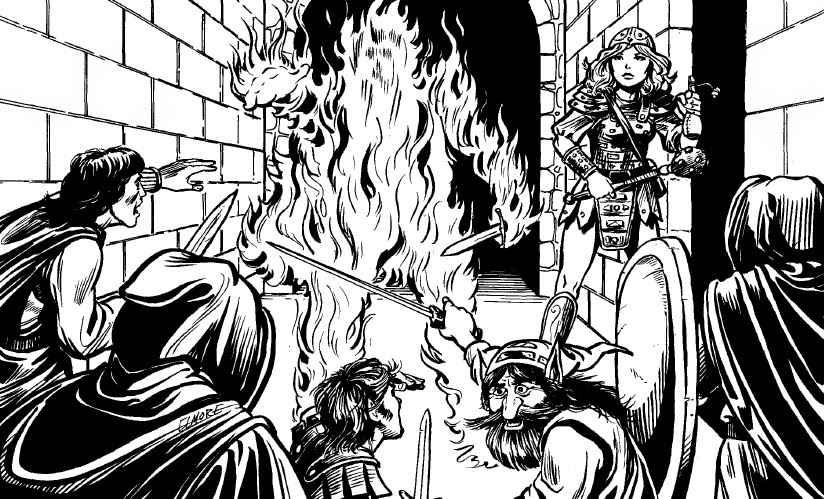 This adventure is actually four linked scenarios. They were originally four unrelated convention adventures by Frank Mentzer. Paul Jaquays was in charge of putting them in one book and Jaquays rewrote them to some degree.

There's some really inane stuff in here. There's time travel. There's a sitcom family of fire giants. I assume this was a Mentzer idea. He's the one who wrote that basic D&D adventure where you go to New York City and fight a gang on a subway, and you travel to a dimension full of talking music notes. 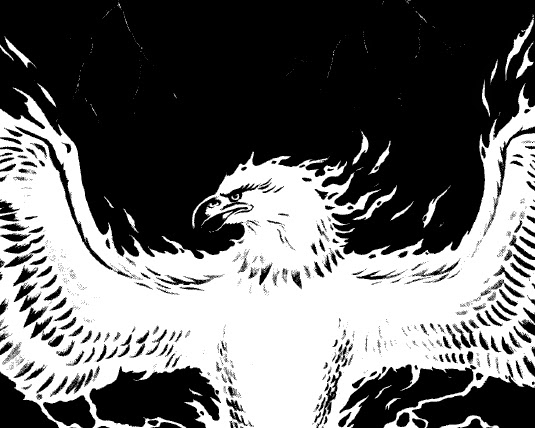 One of the Egg of the Phoenix scenarios has a demiplane where a skull-faced moon tries to kill you! I feel like I could write an entire column just on this adventure.

The basic story in this is that the Princes of Elemental Evil want the Egg of the Phoenix, a powerful magic item. There is a possibility that the heroes have to actually fight all four of the Princes! Imix is in the form of a 20-foot tall red bull.

I love the first paragraph of the Egg's description: "Ancient legends describe the the hero Delcinous as having an 'Ybonee Ygg swoddled in fyre' which 'did Ynchante the armees of Yvl as one.'" 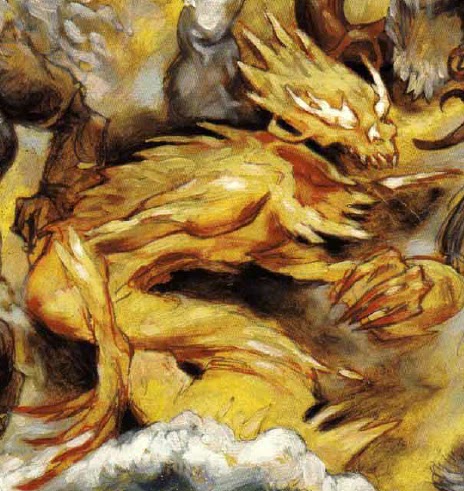 I did not expect this art to appear in a Planescape Monstrous Compendium. Those books are usually full of awesome stuff by Tony DiTerlizzi. Here, all of the archomentals are in a single image, all colored a variation of brown or mustard yellow. Here's what we learn:
D&D 3rd Edition

This book has a lot of cool stuff in it, including some new ideas on the connection between the princes and Tharizdun.

There is a section on "Avatars of Elemental Evil", which talks about how Imix and the others want to use the Elder Elemental Eye to extend their influence into the Prime Material Plane.

The Eye is trapped in a void between the planes. The Princes are trying to free it. They are unaware that The Eye is actually Tharizdun, who seeks to annihilate all of reality.

The worshipers are divided into elemental temples. The fire clerics wear amulets and bracelets with continual fire cast on them. Fire giants, salamanders and efreets also worship.

Imix created an elemental avatar, known as a holocaust disciple. It's a fire monster that relishes spreading destruction and misery.

This thing can cast fireballs every round and can even summon a meteor swarm once per day! It has a heat aura and can generate waves of flame that hit all within 60 feet for 13d6 damage.

Return to the Temple of Elemental Evil

Lareth the Beautiful was able to call on Imix for aid. Their hope is that Imix can free Tharizdun.

Imix dwells in the fire node in a long hall of circular, flaming pits. He has a throne of glass that is filled with roaring flames.

The adventurers actually fight him. He has a colossal flaming swor and is accompanied by a half medusa/half-fire elemental named Maliskra.

Issue 347 has a lot of elemental evil stuff in it, including an article on the archomentals. In it, it explains that there were wars between Law and Chaos. In these wars, the good archomentals sided with the Wind Dukes of Aaqa (who were in the Rod of Seven Parts boxed set adventure and the Age of Worms path). The evil princes sided with the Queen of Chaos (the villain from the Rod of Seven Parts).

They gave Imix some nice flavor:

"This pillar of red flames crackles and hisses with life as flaming tendrils stretch out to grasp and feel. This roughly humanoid column stands as tall as three humans and radiates waves of intense heat."

Imix lives in a volcano on the Plain of Burnt Dreams, which rises from the liquid flames of the Blazing Sea. He has a pyramid fortress known as the Temple of Ultimate Consumption.

Imix is passionate, intense and easily infuriated. He is also vain, jealous and quickly frustrated.

Imix cannot enter water or any non-flammable liquid. He is 18 feet tall and weighs... 6 pounds.

His greatest servant is Asgeroth, a pit fiend who is loyal and power-hungry. His job is to destroy Zaaman Rul.

They actually detailed the good archomentals in this issue, one of a million reasons why Paizo is so awesome. They fleshed out the lore of D&D so much and did it well. Here's what we learn about Zaaman Rul.

He is courageous but naive, and has built a fortress called the Hidden Heart.

When Zaaman's assault on Imix failed, he was left for dead on the scorched battlefield. A phoenix came and restored his body and mind, giving him inspiration and newfound hope. The phoenix is now his ally. It has given Zaaman an army of phoelarchs and phoeras to use.

He has allied himself with a bronze dragon called Rolothere, who is linked to the fey Court of Stars. Through the court, Zaaman has recruited devas, asuras and eladrins.

Other allies include Raziel, lord of archons (who I believe appears int he Great Modron March adventure) and Amaimon, king of the azers.

Imix has his own entry in this book. Here he's a "primordial far older than the world". He "serves" the Elder Elemental Eye, and is still unaware it is Tharizdun.

He lives in a volcano in the Elemental Chaos. His palace is a black inverted pyramid that hovers over magma, its tip tracing the symbol of the Elder Elemental Eye into the rock. That's a great new detail.

Imix lives like a prisoner inside the pyramid. He is level 32, and he has an aura that shuts down fire resistance. Yikes.

There's also an entry for Imix Cultists. They're, you know, crazy people who set fires. Sometimes they'll have a temple in hidden ruins, or infiltrate communities.

Some bigger temples use rituals to summon a Conflagration Orb, which is an "avatar of Imix and a manifestation of the Fire Lord's approval". It is a "miniature sun that hurls flames from it's super-heated mass".

The orb has little regard for Imix's servants and will incinerate them along with enemies.

That is a really great idea. It helps make the cult more unique.

Heroes of the Elemental Chaos

This book talks about how the Princes had to go into hiding after the Dawn War (the ancient conflict between the gods and the primordials). It mentions that the good archomentals - Ben-Hadar (water), Chan (wind), Sunnis (earth) and Zaaman Rul (fire) actually fought alongside the gods in the Dawn War.

Imix "was the first to emerge from the chaos at time's beginning". Ever since the end of the Dawn War, he has been trapped in a volcano's fiery heart, unable to escape the bubbling magma and noxious fumes confining him. 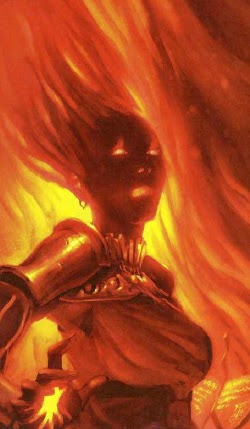 The good prince of fire, Zaaman Rul, is Imix's son. The mother is the late Bristia Pel, a princess of elemental fire now dead. Lamentations of the Flame Princess...!

There's a section on Zaaman Rul that gives a bit of insight. Imix had a "tryst" with Bristia Pel. Zaaman "inherited his mother's virtue" (umm... she had a tryst with a supremely evil being) and sought to avenge her death - she died in a massive battle that led to the defeat and imprisonment of the Queen of Chaos.

Zaaman led an army against Imix, but was defeated. His army was enslaved, and Zaaman fled. Zaaman is 10 feet tall, has crimson skin and long black hair.

There is a temple to Imix in the City of Brass called The Mosque of Blistering Atonement.

That's where we're at. It seems likely that Imix will have some involvement in the imminent Elemental Evil storyline, so it will be fun to see how 5th edition handles the villain.
Posted by Sean at 8:59 PM