I'm gearing up to start running a campaign again, so as I prepare, I'm thinking about trying to get better at certain things. I've always had a really hard time with incorporating character backgrounds into a campaign. I have two main problems:

Seriously. I forget their background. It's bad. I'm so consumed with keeping my own game straight that I can't handle the player's ideas, even though, in theory, the player's ideas should at least be just as important as mine.

One thing that has helped me remember backgrounds is to make a little campaign handbook where I devote a page to each hero, detailing their story and NPCs that are important to them in some way.

In 5e D&D, the Player's Handbook discusses 4 things that characters have to help them flesh out their character's personality: Traits, Ideals, Bonds, and Flaws.

Recurring Issue: I have definitely noticed one problem with this system. Characters often change quite a bit in the first few sessions, as the player adjusts to fit the tone of the campaign. A lot of times, level 4 characters barely resemble what's written on the traits section of their character sheet.

Here's a quick look at each, with quotes from the PH:

Ideals: "Describe one ideal that drives your character. Your ideals are the things that you believe in most strongly, the fundamental moral and ethical principles that compel you to act as you do. Ideals encompass everything from your life goals to your core belief system."

Bonds: "Create one bond for your character. Bonds represent a character’s connections to people, places, and events in the world. They tie you to things from your background. They might inspire you to heights of heroism, or lead you to act against your own best interests if they are threatened. They can work very much like ideals, driving a character’s motivations and goals."

Flaws: "Finally, choose a flaw for your character. Your character’s flaw represents some vice, compulsion, fear, or weakness — in particular, anything that someone else could exploit to bring you to ruin or cause you to act against your best interests. More significant than negative personality traits, a flaw might answer any of these questions: What enrages you? What’s the one person, concept, or event that you are terrified of? What are your vices?" 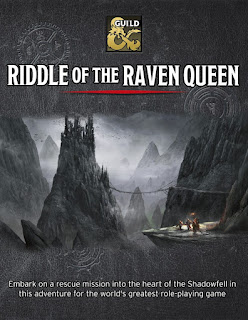 A few years ago, I was chugging along, running a DMs Guild adventure called Riddle of the Raven Queen. I love chapter 3 of this adventure. The group are in the Village of Broken Dreams in the Shadowfell. The village has a curse, and they can protect themselves from it by choosing touchstones. Here's the description of the curse and the touchstones:

Curse of the Evergloom: "Proximity to the Raven Queen and the soul crushing despair of the Shadowfell combine to create an insidious curse for those that linger too long in Broken Dreams. The curse of the evergloom slowly drains away every memory that gives a creature passion. Every hour that a creature with an Intelligence of 6 or higher is within the borders of Broken Dreams, they must succeed in on a DC 10 Wisdom saving throw or be afflicted. A creature that succumbs is affected by a calm emotions spell and loses a Personality Trait, Bond, Ideal, or Flaw; usually starting with those most tied to strong emotion. Such a creature intellectually knows the missing personal characteristic was part of them but cannot muster any desire to recover it. This curse cannot be removed within Broken Dreams without venturing into the Fortress of Memories to retrieve it from the Raven Queen herself."

Touchstones: "Objects have meaning, and in Broken Dreams, they can help fend off the curse. Any item that reminds of or symbolizes a trait might help protect the creature. For example, a cleric with the Ideal “I trust my deity to guide my actions,” might find solace clutching a holy symbol of their faith, while a rogue with the Flaw “I value coin over friendship,” might hold onto that part of herself by pocketing a gold piece she stole from the cleric. Any such reminder gives the character advantage on their next saving throw against the curse and if the character succeeds, the object becomes a touchstone."

"While in Broken Dreams, a touchstone houses a memory crucial to one’s identity (such as a Personality Trait, Bond, Ideal, or Flaw) and may keep the curse from ever siphoning away that memory. A character with four touchstones becomes immune to the curse."

"Anyone handling a touchstone for a short rest experiences the feelings associated with the touchstone, and any creature losing their touchstone loses that piece of themselves. The characters would do well to guard any touchstones they create."

Using Touchstones: I really like this. It's a sort of Planescape-style thing to do, a way to delve deeper into what makes a character tick. I plan on making their touchstones a permanent thing.

I have awful reading comprehension skills, so I messed this up a bit when I ran it. The group was supposed to choose 4 touchstones, but I told them they only needed one. Some chose more than one, though.

Here is what the group chose as their touchstones:

Let's say that Mistletoe has connected his wand of wonder to his ideal, which is: "Respect. People deserve to be treated with dignity and respect. (Good)"

So what happens if he disrespects someone? Does his wand malfunction? Do I say that the DM gets to choose which effect goes off the next time he uses it? Conversely, if he lives up to his ideal, does that mean he gets to choose the next wand of wonder effect? Or maybe he rolls twice and picks the one he wants?

If he shatters his ideal, does the wand break? If he lives up to his ideal on a massive scale, does a wild magic zone spring up in an aura around him?

Also, his shattered sword. Do the pieces dance if he lives up to his ideal? Does it re-form for a time?

I allowed the group to pick living beings as touchstones, even though the adventure says it should be objects. I just thought it would be fun. In this campaign, Ramrod and Asana are a couple. Asana has been selected as a touchstone.

She might be linked to his Bond: "My family, clan, or tribe is the most important thing in my life, even when they are far from me."

So what happens when Ramrod acts against his bond? He literally said in one session that Asana is his tribe now. What could happen to her? She's an air genasi, so maybe turbulent winds form around her. Conversely, what if he lives up to his bond in a big way? Does she gain some kind of power or energy? Temporary hit points?

I haven't got all of this figured out, yet. But I think I can use touchstones to help make the game feel more involved. I am thinking that, before each session, I'll pick one character and "test" them. I'll put them in a situation where they need to make a choice based on their flaw, or bond, etc. I'll write out consequences for each.

Over time, the players will feel like they really get to know their allies better, and I think they'll care more. That should, in theory, lead to a deeper and better game.

Random Personality Generator for your Character