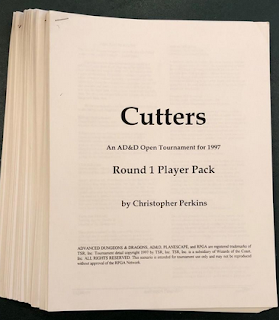 Today I want to talk about a hidden gem - a real life lost artifact of D&D. It is a 2nd edition Planescape adventure written by Chris Perkins. No, not Umbra. Not Nemesis. We're talking about Planescape: Cutters, a massive D&D adventure (a trilogy!) that was run at Gen Con about 20 years ago.

Almost everything I can find about this adventure is culled from an interview on mimir.net.

Chris: "Encouraged by my earlier work, the RPGA® Network asked me to design a three-round AD&D Open tournament based on the PLANESCAPE® Campaign Setting. The result was a titanic trilogy of adventures collectively titled "Cutters." At close to 75,000 words, it's the longest thing I've ever written, and probably the best thing I've written as a freelancer. TSR was in financial turmoil at the time, so I wrote the adventure for free. The "Cutters" trilogy is mostly set in Sigil and takes place prior to the events chronicled in Faction War. The plot involves heroes from various factions working together to achieve a common goal-preventing the return of a not-quite-dead faction called the Incanterium. It's a matter of personal pride that I was able to incorporate over one-third of the NPCs from the Uncaged: Faces of Sigil accessory into the "Cutters" trilogy. I also found room to include the Lady of Pain in one climactic scene."

"Cutters" was my last project before being hired by Wizards of the Coast as the editor of DUNGEON Adventures. My first freelance project after joining the TSR family was "The Manxome Foe," an RPGA ADVENTURER'S GUILD™ module based on the PLANESCAPE campaign; the adventure was later included in the TSR JAM 1999 product."

Do you think we may see "Cutters" in print someday, as an actual Planescape product? Has this been considered by TSR or the RPGA?

Chris: "Cutters" will not appear as a future PLANESCAPE® product. At the end of Faction War, the factions (at least, the surviving ones) are banished from Sigil. Since "Cutters" is based in Sigil and features numerous factions, it no longer "fits" the current PLANESCAPE timeline. It's conceivable that it might appear in an electronic format someday, but there are no immediate plans to make this happen."

The Adventure is Huge

This site gives details on the actual 'product' (which is just photocopied paper stapled together). Check it out:

AD&D Open Tournament at Gen Con. Three Round Tourney for 8 players (round 1 in three parts).

The module is a Planescape module. The characters all represent different factions in Sigil.

Apparently, the adventure involves a vanishing tower. This person made what looks like a fantastic Planescape timeline. Check out the Post-Sigil Timeline:

"The Tower Sorcerous reappears after centuries, back in its original location. Three days later, it again disappears. (RPGA:C)"

This weird site has a nugget, too:

"1997's adventure was entitled Cutters, set in Planescape, with characters subtly potentially set against one another in the final round as representatives of Factions all seeking a dangerous tome."

Every year or so, I ask on twitter if anyone knows where I can find a copy of this adventure on twitter. In 2019, Chris Perkins himself responded.

A year and a half later, I asked on twitter again. This time, D&D Designer Dan Dillon revealed he'd actually played the adventure!

He was nice enough to give us some details:

"I remember the party woke up in jail. We were looking for someone, I played a rogue modron with drawers full of portal keys."

"There was a vaporighu that was completely f*cking terrifying. One of us died just trying to talk to him, and another got their mancatcher destroyed."

Help Me Find This Adventure

I'm on a quest. I want to read this thing. I want to write ridiculously huge articles about it.

The photo of the product is from this link.

Someone asked around about it on ENWorld.

If you know anything about this product, any kind of information I can add to this article, contact me:

I hope somewhere down the road, maybe 5 years from now, I will have a copy of this adventure in my hands. I want to read it and dissect it. Maybe we can find a legal way to get everyone access to it through a DMs Guild charity product or something.

It's interesting that it deals with the return of the Incanterium's tower centuries after the faction just mysteriously up and disappeared. Everyone figured the Lady of Pain was behind it, but was she? I bet this adventure might have told us or at least given possibilities! It'd be a great adventure hook to explore in a Planescape game. I'm sure Alluvius Ruskin (a secret Incantifier from Uncaged: Faces of Sigil) would've played a big role!

I had a brief chat with the author of that Planescape timeline when I was chasing info on 'Poison Pen' and he said this on Cutters: "If you're looking for rare Planescape, then "Cutters" by Christopher Perkins is what you want: Three round elimination for RPGA that rounded out his earlier Dungeon Magazine article "Umbra" and "Nemesis". In it, the Tower Sorcerous, base for the disbanded faction the Incaterium, reappears in Sigil from it's banishment to the Mazes."