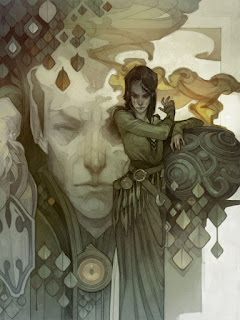 I'm all caught up now! You can read this issue of Dragon+ right here.

We get a full look at the alternate cover to Tasha's Cauldron of Everything, by Wylie Beckert. 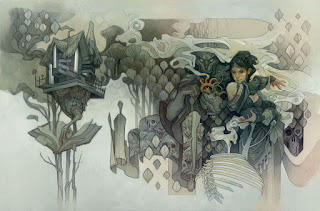 Heyy, check it out. They confirm that Tasha and Iggwilv are the same person: "The adopted daughter of the Baba Yaga, frenemy of Mordenkainen, and real name of Demonomicon author Iggwilv, she is now also the star of her own D&D sourcebook."

I wrote a really ridiculously huge Guide to Iggwilv a while back.

On the cover, you can see Graz'zt and the Dancing Hut of Baba Yaga.

Wylie says she worked in Tasha's hideous laughter, and that the art brief called for Graz'zt to be "looking flirtatious."

In the Works: Tasha's Cauldron of Everything 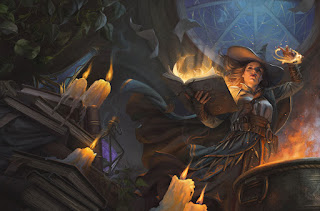 Tasha's Cauldron of Everything comes out on November 17th. Jeremy Crawford confirms that Tasha was raised by Baba Yaga and is a "frenemy" of Mordenkainen.

We get a rundown of what's in the book. Stuff like the artificer class, group patrons, and sidekicks (Jeremy says that playtest feedback showed that people love the sidekicks).

The Demonomicon of Iggwilv is in the book! I think I wrote a guide to that, too. There is a new artifact - a tarokka deck that can capture evil beings.

There are supernatural environments - areas that have been transformed by magic.

In the Works: Curse of Strahd Revamped

Apparently the basic idea of Curse of Strahd Revamped was to put the book and the tarokka deck in one package. So what we have here is a good old-fashioned boxed set that comes with a deck of cards.

The poster map is made of a more durable material so that it doesn't rip when folded.

Aha. This is what I was wondering about: "The D&D Team also took the opportunity to make a few small changes to the adventure itself, incorporating errata that players have discovered over the years. While this didn’t involve any major structural changes or heavy rewrites, it did include a number of finely tuned improvements throughout the book."

There are changes to the depiction of the vistani and Ezmerelda's artificial leg.

The first thing you see when you open the box is an image of Strahd lying in the dirt. On the reverse side is Strahd's stat block. Nice!

In the Works: Beadle and Grimm's Curse of Strahd Legendary Edition

I generally don't write much about these releases because I just can't afford them. But this one caught my interest because there are new maps involved.

They show us some maps, which are new. I don't want to show the whole thing (you can see it in the article), but here's a slice:

That's the bonegrinder. Check out the border, which is quite similar to the 2e Ravenloft cover border.

The cartographer also did a new map of Barovia. Here's a chunk: 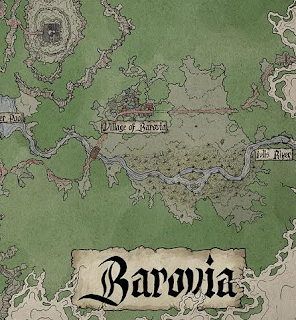 This set comes with a ton of stuff, including the Holy Symbol of Ravenkind. There are also Barovian coins which depict Strahd.

You can order curse of Strahd Legendary Edition here.

D&D Classics: This month, we get olympic-themed .pdfs.

We get a .pdf from the 3e Races of Stone book, which is where the goliath game of goatball actually came from (it's in Rime of the Frostmaiden).

One of the "Challenge of Champions" adventures is here, from Dungeon Magazine #91. I ran the first one, which was in issue #58. It was tough for me because each entry was very dense, but my group really liked it.

Good old 4e gets some attention! Dungeon #176's Cross City Race is here for free - a race through a city where anything is fair.

We even get a slice of one of my favorite rooms from the 5e White Plume Mountain: The "jumping platform" room.

Chef: This one cracks me up, but is also useful. +1 to CON or WIS, your meals allow characters to heal more on a short rest, and you can make delicious treats that grant temporary hit points.

Fey-Touched: I like this one just because it links you to the Feywild. +1 to INT, WIS, or CHA, plus you learn misty step, and a 1st level spell!

Poisoner: This is cool, as it encourages the use of poison in the game. Although that can be a headache sometimes for a DM, poison can lead to a lot of fun stuff.

Shadow Touched: You're linked to the Shadowfell. Love it. It's like the Fey Touched feat,, but you gain use of the darkness spell (another hard spell to handle for me as a DM) and one 1st level spell.

There is a second .pdf with come new subclasses.

Bard: College of Spirits: It's a bard who can commune with spirits. These spirits can grant random powers when you use a Bardic Inspiration. You roll on a chart to determine the random effect - you might heal an ally, teleport an ally, all sorts of things. You might get to breathe dragon breath.

Warlock: The Undead: The warlock's patron is an undead entity like Acererak or Strahd (!).

They can take on a 'form of dread' for a minute, giving them temporary hit points, immunity to the frightened condition, and more.

Wow, once they hit 6th level they no longer need to eat, drink, or breathe.

Very cool, love the warlock. The bard is fun but, while I love random charts, not sure how I feel about some of the results.

This one of those epic walkthrough maps by Jason Thompson. This has been published before. I think I actually used it as reference in my Guide to Curse of Strahd... because this thing is amazing. This guy doesn't get nearly the recognition he deserves.

Maps of the Month

We get a Theros arena map (everyone needs an arena map, IMO).

We also get some nice city maps and some fantastic grid maps of forest areas.

Heyy we even get a map of that room in White Plume Mountain!

Dang, they even throw in another Jason Thompson walkthrough map, this one of the Hall of the Fire Giant King.

Jason Thompson's cartoon maps are the best--always look forward to new ones! He's also the one who wrote the Barber of Silverymoon and Six Faces of Death adventures, which are pretty fun little romps. My interests had a weird crossover when I learned he was also the original English editor for my favorite manga, One Piece.