Dungeons & Dragons - A Guide to the Gray Render


Today I'm going to tackle another monster who seems to be a Monte Cook favorite - the Gray Render. We'll go through each edition, and take a look at some gray renders in actual adventures.

In my opinion, the most interesting content lies in a Dragon Magazine article that never actually got published! Details are at the bottom of this post.

Here's the description: "This hulking biped has the mass of a giant. It has a stooped frame, a gray, hairless body, and broad shoulders. Its arms are long and sinewy, and its clawed hands scrape along the ground as it walks. Its sloped forehead bears six small, yellowish eyes. Its mouth is wide and powerful-looking, filled with black teeth."

Details:
Protectors: They tend to bond with creatures native to their surroundings. The creatures could be wolves, horses, displacer beasts, even unicorns.

Whether accepted or not, the render keeps close, watches over them, and brings them offerings of meat each day.

Bite: The gray render can clamp down on enemies with their bite, effectively grabbing them. Then, they rend and tear the flesh.

Six Eyes: Their 6 eyes give them extraordinary sight.

City of the Spider Queen 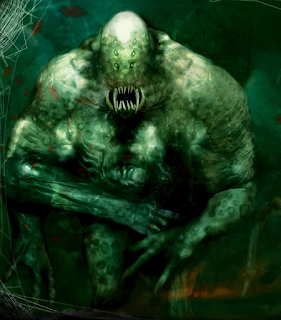 Arachnoid Gray Render: This adventure features a drider/vampire named Jhorganni, who is building a vampire cult devoted to Kiaransalee. Her bodyguard is an "arachnoid gray render."

The render lurks in her nest.

Description: "...another hulking monstrosity, a multi-eyed thing with multiple arms and huge mandibles dripping with venom."

"The render is covered with chitinous plates, and coarse brown hair protrudes from between the plates. It has eight eyes instead of six, and six muscular arms instead of just two. Poisonous mandibles jut from its mouth."

The arachnoid gray render has stats somewhat similar to a normal gray render, except that it has a poison bite ans is immune to charm/illusion/etc.

In this adventure, the heroes must enter the Demonweb to battle Lolth's daughter. Along the way, they come upon an area guarded a gray render. The gray render serves Ullistrin (a drow vampire) and Vagdrioth (a drow mage).

This adventure features a special group of spellcasters called the Runewardens. Their leader is named Tyrestina, and she has a gray render protector.

Description: "Within a shimmering sphere stands a human woman with long black hair. Covered in tattoos and symbols, she holds a bright red wand and laughs maniacally. Three terrible, spine-covered, sulfur-breathing beasts stand outside the sphere, pawing at the ground, an a huge, hulking brute with gray leathery skin and six eyes crouches protectively next to it."

4e Monster Manual 2
"Widely feared throughout the world, a gray render kills everything in its path. This creature feeds upon flesh and terror alike, working itself into a mindless rampage."

Uses You as a Weapon: In 4e, a gray render can use a grabbed target as a weapon. If they hit with it, the target takes damage and gets swatted 20 feet back, while the bitten victim takes half the damage as well.

Dismembering? Gray renders have a "dismembering Bite" that does a pile of damage.

Lore: Scholars believe that their roots can be traced back to the Elemental Chaos, where they gained their chaotic impulses.

Entropy is bound within the existence of gray renders, causing them to leave a path of wanton destruction in their wake. They are drawn to homesteads, where they unleash their destructive urges.

Wow. They got rid of the whole bonding/protector stuff, which to me was the most interesting thing about the monster! 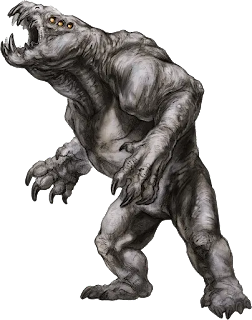 Oh good, they got their protector thing back. Right off the bat, we are told that gray renders want to bond with an intelligent creature and will, if necessary, give their lives to protect that creature.

New Reproduction Method: They reproduce by forming nodules on their bodies that break off to form young gray renders.

"As a side effect of its breeding. each gray render has an overpowering need to bond with an intelligent creature."

Singing: When a gray render finds and identifies a suitable potential master, it begins to sing, a weird warbling cry.

Chaotic: Gray Renders are chaotic and can cause problems for the masters. They sometimes follow despite being told to stay put, burrow holes, all sorts of stuff.

Quirks: We even get a chart of quirks! One result: "Likes to snuggle." Buries treasure that it finds. Chases birds.

Stats: The stat block is pretty basic. They can knock you prone, and get a reaction attack when they take damage.

Needs More Rending: The one thing I'd like to see more of with a gray render is actual "rending." I do like the idea of them being able to dismember people, though in D&D that can cause all kinds of problems.

There is an accompanying youtube video about gray renders.

In this video, Adam Lee discusses how some have said that the gray render was made from elemental chaos. Then he says: "A group of silver dragons were polymorphed into elves, so they created bodyguards." I think he is actually referring to the unpublished Dragon article which I discuss below.

Gray renders are tough, loyal, and destructive. They go from 0 to 100.

Adam says that a low-level character could get a gray render as a companion, and then the fun begins when it does something random and crazy. They're bizarre and alien. They're from a different kind of realm.

Sometimes Google gives you greatness! I found a post on ENWorld that contains an unpublished Dragon article about gray renders. The poster says:

"This is another of the fiction-and-footnote "Ecology" articles I had sitting on the Dragon editorial desk in 2000 when the new editor decided to scrap that format." The whole thing was purposely full of misspellings, but the assistant editor didn't like it."

This is one of those ecology articles done in a story format, with footnotes containing D&D stat stuff.

Vrak and Lizzie: The story goes like this. The main characters, Vrak and Lizzie, saw a gray render leading a herd of cattle to a river. They approached the render, but it chased them away.

They continued to spy on the herd, and watched as a wyvern tried to snatch one of the cows. The gray render protected the cow, and tore at the wyvern's wing, forcing it to flee.

Yikes, this one is dark. Lizzie insists on trying to heal the render. It kills her in a most gruesome fashion. Once Vrak recovers from shock, he just slaughters the render with his axe.

Origin: Gray renders may have come from the planes or an alternate reality. No 'planet of the gray renders' has been discovered.

Motivation: Their most power driving force may be a feeling of isolation and loneliness.

Speculation: Others think that gray renders might be a created race. Wizards might have made them to look after various groups of animals, or to act as bodyguards.

True Origin: Gray renders were created by a small conclave of silver dragon wizards who spent most of their time in elven form. The renders were made as bodyguards, and their means of reproduction was designed so that the silver dragons wouldn't have to create new ones every few decades. "The gray render arranges for its own 'replacement' before it dies of old age."

The method of creating gray renders was passed to several elven communities, and then to wizards.

Eyes: The gray render's eyes detect even the tiniest movement.

Bony Plates: Gray renders have thick bony plates on their heads that form distinctive patterns. A newborn is a clone of the parent, and thus will have an identical pattern.

Walking: They walk similar to gorillas, "knuckle-walking" with their hands.

One Offspring: Once in a gray render's lifetime, it grows a bud which becomes an offspring, which develops in the render's pocket. The offspring nurses in the pouch for 6 months, and then goes off on its own.

Long Lifespan: They can live for several hundred years, and will look after generations of its adopted wards.

No Talking: Gray renders can understand spoken language, but cannot speak. They lack the necessary vocal apparatus to speak with.

That's it! Not too much on the gray Render out there. It seems like there's a lot of room to add your own details. Giving the group a gray render sidekick seems like it could be a lot of fun.

I wish you had tagged these monster guides, would make them a lot easier to find.

Also, do you know if Lurker Above ever appears after 2nd edition?

The gray render was originally introduced as a unique creature, the render. It was an accidental blend of human and tanar'ri.

This was from the 2E boxed set Ruins of Zhentil Keep.

Interesting. I'll have to keep this lore in mind if I ever throw one of these into one of my campaigns!