Hoard of the Dragon Queen - The Mere of Dead Men 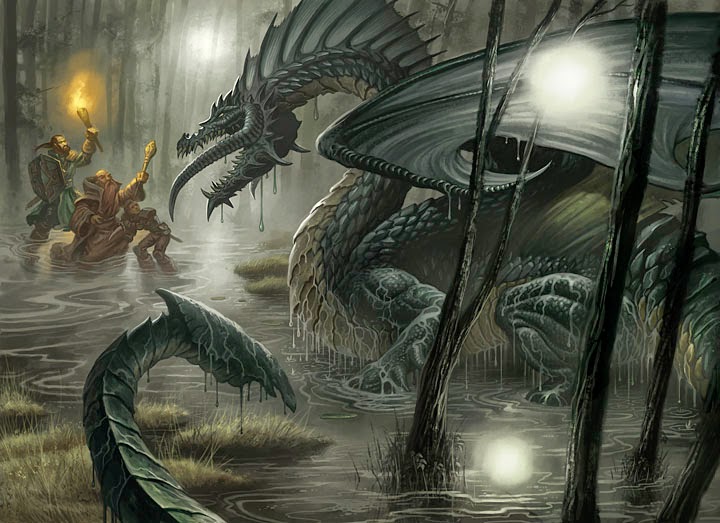 I am kicking myself for not looking up more on the Mere of Dead Men before running this session. Just now I found this article by Ed Greenwood which reveals a lot more about the mere and the black dragon that lives in it. You should definitely check this out before you run Episode 6.

Our store has actually expanded to 4 tables of D&D Encounters games. I am pleasantly surprised that we have retained the vast majority of players. Usually when we run encounters seasons in the store, we start out with a pile of people and then it dwindles down to a single table. 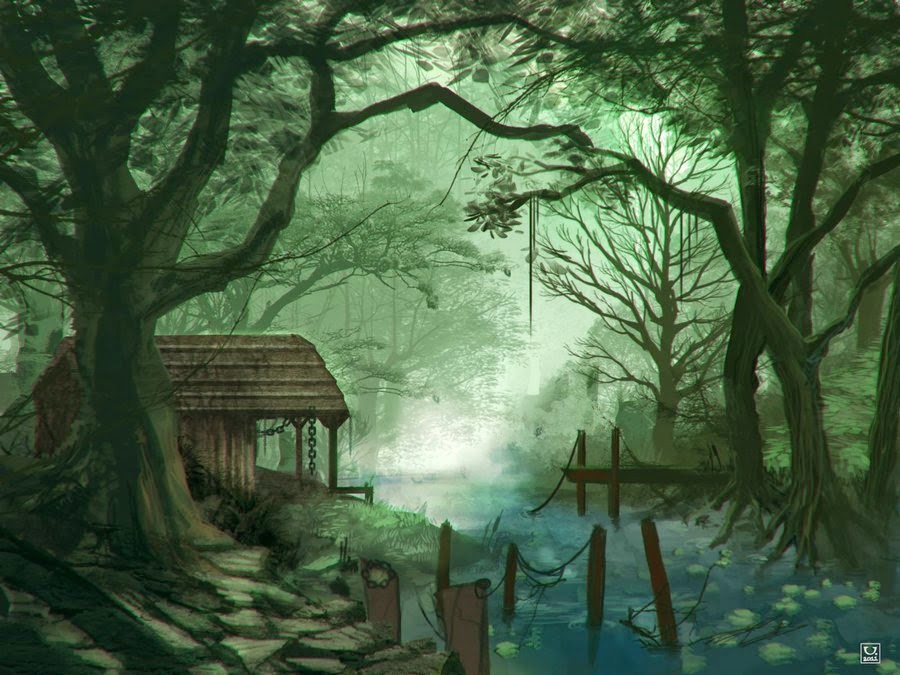 Last week I had become concerned that my group was somehow too low-level for where we're at in the adventure. I saw that the group is expected to hit level 6 by the end of episode 6. At the start of yesterday, the PCs were level 4. I decided that this session was going to be designed to rocket them deep into level 5 before they even got to the main part of the episode.

This means I had to expand on some stuff. I took a bunch of random encounters in the adventure and fleshed them out. I'm not sure what is "legal" in Adventurer's League and what is not anymore. 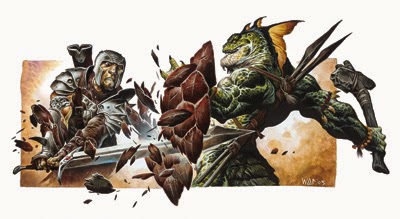 Got all that? This thing was a real pain to prepare. The last episode was about 4 pages long. This one is around 20 pages. A lot of it is dull room descriptions.

In tonight's session, all we did was the journey to the castle. I took a bunch of random encounters and fleshed them out. I tried to make half the encounters non-combat situations where XP could still be heaped upon our heroes.

Shambler, The Weed That Walks 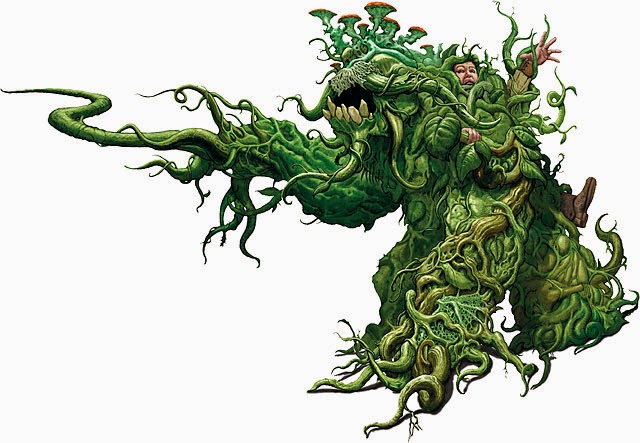 I kicked this off with an encounter with a shambling mound. The idea here was for the PCs to befriend him. He could give the PCs information and help them if things got too tough. I did this thing where he could grow healing tubers on his body. If the PCs ate them, they healed d8+2 and could speak with him telepathically for a bit.

The heroes rescued him as I'd hoped. He was impaled on a tree by bullywugs and left to rot. He would check in on them throughout their journey as I deemed it necessary.

I threw six giant spiders at them. These creatures are 200 XP each. They very nearly killed the whole party. Their bite does 7 damage plus 9 poison (4 if the PC makes a CON save).

Two heroes dropped from the poison. According to the Monster Manual page 328:  "...the target is stable but poisoned for one hour, even after regaining hit points, and is paralyzed if poisoned by this way."

My group had three rogues, one sorceress and one paladin. They did not focus fire and I am pretty sure they are not using many of their abilities. I think I am going to read up and make sure they are up to speed on what they can do, because this was alarming.

I had Shambler, The Weed That Walks show up at the end of the battle. They had some healing tubers, waited for their poisoned pals to recover, and then continued on. 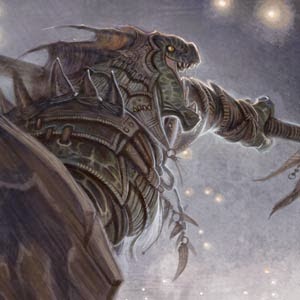 The lizardfolk approached the group peacefully and luckily many of the PCs speak Draconic. The shaman explained his vision, and saw that the heroes had a cart with a crate that had holes in it. He eventually convinced them to let him open it. The lizardfolk gathered around and were in awe of Sparky. They wanted to take him.

Dark the dragon sorceress would have none of this. She yelled at them and made an intimidation check. And, of course, she rolled a natural 20. The lizardfolk apologized to her and fled into the swamp. 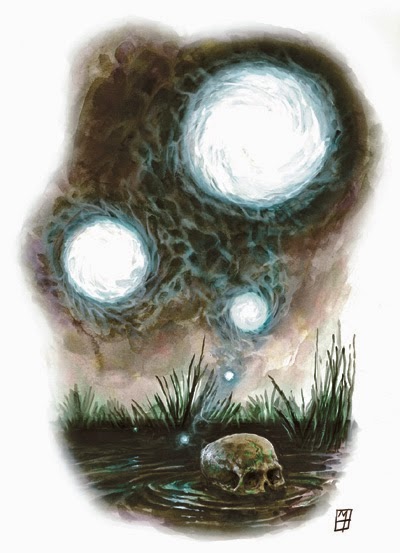 A Will o Wisp is something every D&D group should run into once. This glowing ball of light was able to get the PCs to follow it. It led them into quicksand! One of the rogues almost died, but a clever combination of spells, rope, and a paladin power saved him.

I was going to run a yuan-ti encounter, but after the spider fight proved so deadly I skipped it. I didn't want a TPK.

Voaraghamanthar has a secret. He has a twin. The dragons keep this a secret, preferring to let the world believe there is only one black dragon in the swamp.

I wanted to give the PCs a chance to find this out, or at least see clues. So I had another will o wisp lead them to his lair!

The lair is marked by acid-burned skulls hanging on trees. Outside the dragon's cave was a hut with lizardfolk who worshiped him. 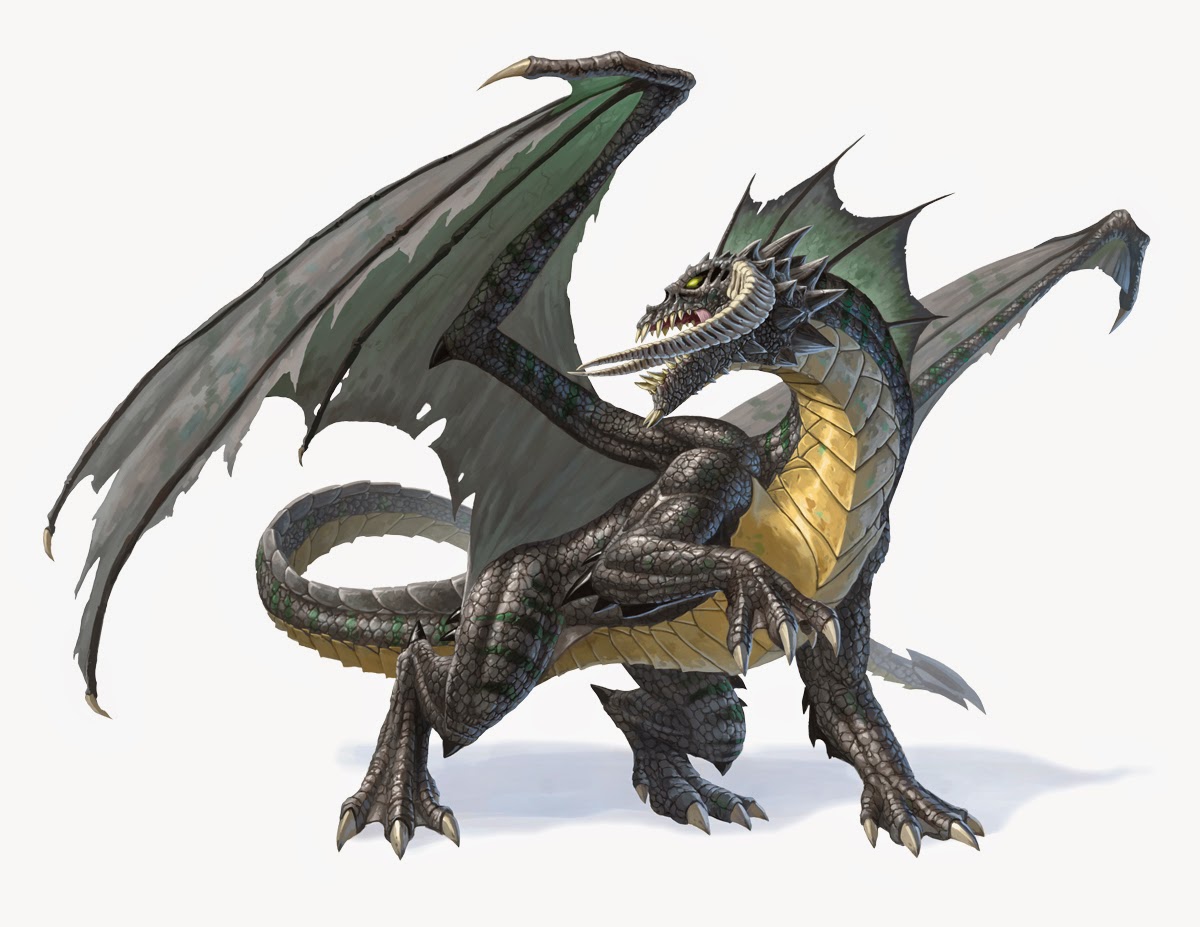 A lone, brave rogue decided to sneak in to the dragon's cave. He rolled high and got a good look around. Now that I have read that article about Ed Greenwood.. I really blew this lair. I also didn't take into account lair actions in the Monster Manual.

Inside the cave were kobolds cleaning the dragon's hoard. Voaraghamanthar sat on top the hoard. A second chamber had a second treasure pile with kobolds cleaning each of the coins and stacking them in a neat pile. Two treasure piles - that was my clue to them that this was actually the lair of two dragons.

When the rogue stealthed his way back to the party and told them, they erupted. The players (mostly kids/teenagers) were loudly shouting about what they wanted to do. With three rogues in the group, they desperately wanted to creep in there and steal some treasure.

When I was planning this, I knew there was a chance they'd get their hands on this treasure. You never know what's going to happen in D&D. Players often come up with some clever, outside the box idea that achieves goals that I would have thought impossible. That's part of the fun of the game.

So I had decided that if they did somehow get treasure, I'd stock it with +1 items. I don't think that's Adventurer's League legal, but again I can just tell the players that if they take these characters to another table, they might not be allowed to use the items (though I don't think it matters much).

To me, +1 items in a dragon hoard is extremely chintzy. But in this entire adventure, our 4th level heroes have found a +1 bow.. and that's it! In older editions, it is utter madness for them to not have +1 items by now. I guess in this edition, magic items are not part of the core math and are given out more rarely to make them feel special.

Well, anyway, it doesn't matter. The group had a freakout right in front of the cave entrance. For some reason, a rogue took Sparky out of his crate and rolled him around in a stream (the players were spazzing out.. I'd brought a bag full of gummy halloween candy and I think the sugar put them into a kind of candy hyper-madness). Sparky let out a happy squeal... which echoed throughout the camp.

Voaraghamanthar the black dragon sensed something was up. The dragon sniffed the air, roared, and slowly approached the cave mouth (I gave them ample time to hide, run, do whatever... this dragon is probably way too powerful for them to fight).

All of the group ran and hid except for DARK THE DRAGON SORCERESS. She was scared, but stood her ground. With her was the cart and the crate, which Sparky had been hidden in real quick.

The dragon sniffed the crate and questioned Dark in Draconic. He assumed she was with the Cult of the Dragon. We had a long conversation, where Dark learned that Voaraghamanthar was being controlled by the black dragon mask. Voaraghamanthar didn't like it. Dark agreed to kill Rezmir and to bring the mask to the dragon.

We were out of time. Next week we will get into Castle Naerytar and who knows, maybe they'll try to sneak into the dragon's lair. Honestly that would be pretty awesome.

Sounds like you ran this session as a resourceful DM should, taking into account both the party needs and a willingness to take the adventure completely off rails for the sake of the game instead of adhering to what is written. I’m not sure I could have wrangled this half as well as you did. Great idea with the Shambling Medic as well! Big kudos.

I am always impressed with every one of your posts. Each entry teaches me a lesson on how to be a better DM. In the end, I’m glad I decided not to run this module with my group. It requires too much tinkering, and while I can say I’m an experienced DM, I’m not sure I am as mindful of all the adjustments required to pull off this adventure successfully.

I’m looking forward to hearing what happens next week.

Coffeemate: Thanks! I wanted Shambler to be a way to heal the party while i ran them through a gauntlet of XP-laden encounters. I appreciate the kind words!