In a few weeks, the new D&D Encounters season starts. I got my hands on the DM packet as well as the adventure, so I figured it might be useful to go over the basics.

For those just getting into the game, D&D Encounters is a program where you go to a game store (on a Wednesday - our store runs Encounters on Wednesdays at 6 PM). You go there to play and a DM like me lets you pick a folder full of stuff. I'll hand you a pre-made character if you don't have one with you. If you don't have a DCI card, I'll give one to you. This is to track your participation through the online reporting tool. DCI cards are also used for Magic: The Gathering games.

We are now part of the Adventurer's League. It is broken down into three programs: 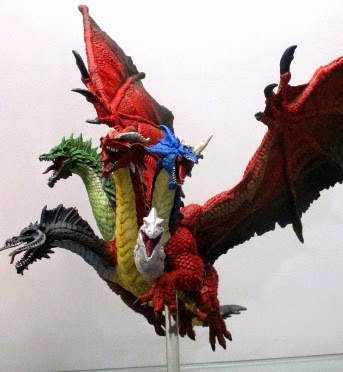 D&D Encounters: Where we play the first section of a published adventure over the course of a few months. Once the season ends, we can either continue the adventure or jump into the new season. Or we could do some expeditions.

D&D Expeditions: These are short stand-alone adventures. Check out the list here. I will definitely try to run Jobe Bittman's adventure at some point. He wrote the DCC RPG adventure The One Who Watches From Below, which was fantastic.

D&D Epics: From what I can tell, these are convention-only super-adventures.

The free player's guide is here.

If you are making a character in advance instead of using a pre-made character, you can choose from either of these options when making stats:

You'll need to pick a faction. You will be given a folder full of stuff about your faction. This folder can also be used to hold your magic items certificates. Yep, when you get a magic item in the game, you will be handed a certificate for it. Don't lose it!

The Harpers: They covertly oppose the abuse of power
The Order of the Gauntlet: Vigilant seekers of justice
The Emerald Enclave: Wilderness people
The Lords' Alliance: Political coalition concerned with security and prosperity
The Zhentarim: An unscrupulous shadow network

Fun Facts About The Adventurer's League: 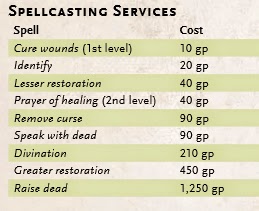 - You cannot play an evil character.
- You can play an adventure more than once, but you have to use a different character each time.
- You can trade magic items with other players, but you both must have certificates and the items must be of the same rarity. Only items with a "trade log" on them can be traded.
- Arms and armor looted off of slain monsters cannot be sold (the items can be used for that session only, though).
- Players can earn 0 to 2 renown points for their standing in their faction each session.
- There are rules to pay for spells! You can get a 1st level cure wounds spell cast on you for 10 gp. I am really liking this. 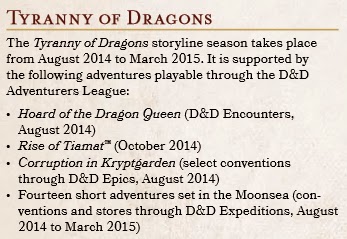 - A "first tier" character (aka characters level 1-4) can be raised from the dead for free by their faction. But on exchange, the character forfeits all XP and rewards from that session (even those earned prior to death).

The basic story of this season is that a cult seeks to free Tiamat from her prison in the Nine Hells.

I'm not going to harp on this too much, but Tiamat was killed by my heroes (well, technically they used the arrow of fate to combine Bahamut and Tiamat into the dragon god known as Io to fulfill a character's epic destiny) at the end of the 4th edition Scales of War campaign. And she was not based in hell. I understand that there is no set continuity for the game, and that the Realms has a bit of an altered cosmology. I think in my home game I'm going to have to have the heroes split Io with that primordial's axe to re-form Tiamat and Bahamut just so my game can roll along with the current D&D storylines. 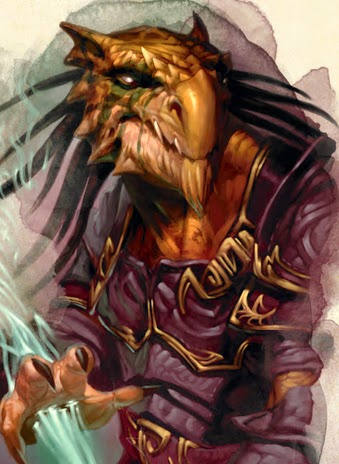 What is kind of cool is if you go and check out the Planescape adventure Fires of Dis, you can actually explore Tiamat's lair in hell (which made me really angry).

There are rules for distributing magic items. Either the group comes to an agreement as to who gets it, or if there are multiple suitors, the PC with the least amount of permanent magic items gets it. If it's a tie, the DM rolls randomly to see who gets it.

Cheating! I am going to just post the whole cheating entry right here in an image. The text advises me to try not to embarrass the cheater. Cocked dice are the main culprit in my sessions, along with the old "I roll when the DM isn't looking - if it is bad I pick it up and roll again when the DM is looking" routine. 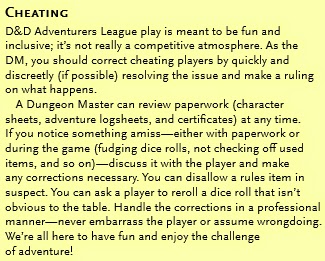 There's a whole section on appropriate behavior! You officially can not do a table flip! And wow, I've never run across this: Taking an inappropriate photo of other participants. Creepy! And how do you like this... don't take other people's dice without permission!

The punishments for different behaviors are outlined.

Disruptive Behavior: First, you get a warning. On a second warning, I notify the organizer (in my store, I am the organizer and DM, as far as I know). Get a load of this! If the DM is disruptive, alert the organizer. Wow. 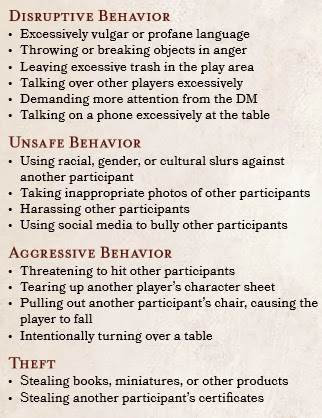 Unsafe Behavior: One warning, then you are gone, you jerk.

Theft and Aggressive Behavior: You are ejected, buddy. You don't have to go home, but you can't stay here.

Let's take a look at the stuff in my DM folder.

- A table tent that succinctly describes each faction (this is pictured above, where I describe each faction). I've never been that big on factions, though the Neverwinter 4e season did it very well.

- A special certificate that lets me, the DM, get special starting items when I play. I could get 300 gold, or armor, or a bag of holding, or gloves of swimming and climbing. There's a section on page 12 of the .pdf about DM Rewards. Apparently I earn experience points for a character when I run a game! You know what I am going to do? I am going to make a character and never use him in a game and see how high I can get him! Heck, he can already start with a bag of holding, right? Maybe 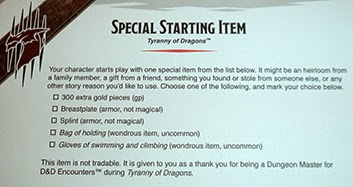 I'll make up his adventures each week when I write my session report. Maybe I'll have each player make up an encounter for him at the session and I'll make some roll to see how he did. Heck, if any of you readers have any ideas of grueling or comical encounters for this poor sap to go through, let me know. Hmm I think I will base this character on one of the drawings Tony DiTerlizzi did that he posted on twitter recently. More on this soon.

You know me. I hate being a player. I run these public games for two reasons: To meet new players for my home games, and for swag. This is not swag to me. I want dice, minis, poster maps and printed adventures as rewards. I don't want 300 gold!

A real-life gold piece.. now that would be awesome. Stamped with a D&D logo. Somebody do that!

- Tear of Bahamut: I had a hard time taking a good picture of this. Maybe I'm being too dainty, but I don't want to take this out of its' sealed package until the season starts. This is a magic item that can bring a dead person back to life. The most interesting thing here is that it can only be used in a 3 month real-life time period.

It looks like this is given out near the end of this season but can only be used in the next one. That is a fascinating way to try to lock players in, to get them to keep coming back. 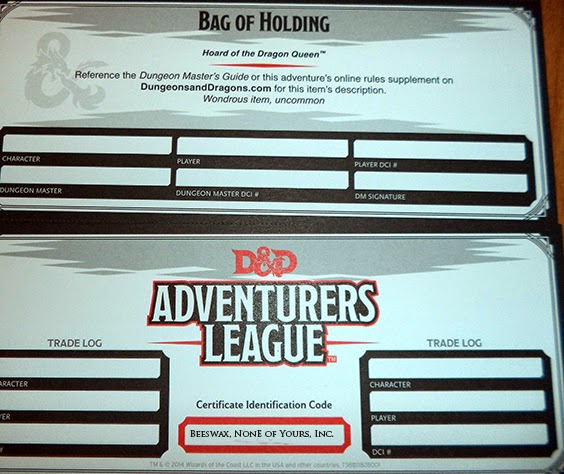 - Large stack of magic item certificates: There's all sorts of stuff, including the mighty bag of holding! All that space on the cards and they can't put the description on it? On the back is the trade log. Apparently it can only be traded once or twice.

I am wondering what we do with these when an item is expended? There's a few potions in this pile. Once they are quaffed, do I.. tear up the certificate? Write "void" on it? I feel funny wrecking these things. They could be useful in the future. Maybe they should be destroyed to prevent some cad from snatching them and re-using them illegally. Maybe I should buy a funny rubber stamp or something. Maybe I should burn them!

I was originally going to go over the actual adventure, but it seems smart to save that for a separate column. You're probably semi-conscious at this point as it is. See you later!
Posted by Sean at 7:55 PM

you can be lawful evil if you are the right faction